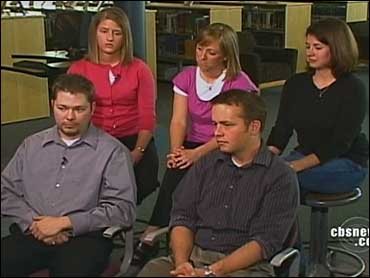 Ten years ago today, Columbine High School became a killing field. And innocence was one of the casualties.

It was a massacre, reports CBS News correspondent Mark Strassmann. Two Columbine students, Dylan Klebold and Eric Harris, murdered 12 schoolmates and one teacher before killing themselves. Their motive is still unclear.

"I had no way to cope with that," said Brett O'Neill, a former student. "No way at all."

No one did. Strassmann met with five former students who fled that day. All have returned, as Columbine teachers.

"I think we were all just crying messes for days," said Katie Tennessen, a social studies teacher.

Tennessen and Mandy Cooke were good friends on that dark day, which they remember, kept getting worse.

"Where is she? I don't see him. Why are they not here? Everyone else is here," remembered Tennessen. "And then kind of realizing, I know why they aren't here."

"When you turn 16, you don't think about your school being shot up," said Cooke, who teaches American Government. "You think about going to homecoming or going to prom and kid stuff, and after that, my life totally changed."

After Columbine, they all decided two things. They wanted to teach.

And they all loved Columbine. It was important for them to work in the same school.

"I never really considered working anywhere else," said Cris Welsh, who teaches social studies. "If anything else ever happened to this school, from a fire drill to anything else, I wanted to be here for that."

"Did you come here because of what happened? Or despite it?" asked Strassmann.

"Both," said Tennessen. "To be that positive teacher these students need. And to say, 'this isn't going to keep me out of my high school.'"

In hindsight, they're all struck by how brave their teachers were.

"Could I be that strong for my kids?" Tennessen wondered, her voice cracking.

Cooke thought she could, until a recent bomb scare.

"I'm not going to lie, I wanted to be 16 again, and be scared and have people protect me," Cooke said. "I didn't feel like I could protecting my students."

She got through it. Now they all have to get through emotions stirred by this 10th anniversary, and memories of the Columbine Thirteen, their names etched in the school's new library. It's a tribute to lost innocence.

"Why did it have to be my high school?" asked Tennessen.

It's a tribute also reflected in the young faculty of Columbine High.

Strassmann asked the former students if there were lessons to be learned as teachers.

"We use it as a teaching tool for a lot of things," said Welsh.

"The humanity part of Columbine is what I try to bring my kids," Cooke said. "Do be kind to one another."

Ten years later, the lesson this school teaches is the triumph of hope.