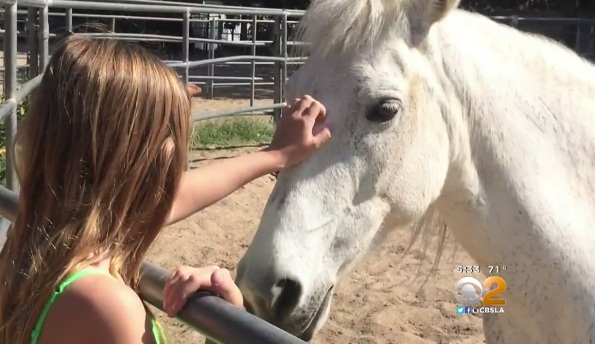 The white Mustang was rescued last year after she was found running up the 210 Freeway in Sylmar, California.

She came to the Total Equestrian Experience in Chatsworth after Ella and her mom, Jen Fox, adopted her.

"We have a unique connection," Ella said. "I think she likes me a lot."

Named Dixie for short, the horse was a challenge for the trainers.

"You'd walk up to a stall and she would just stand at the very back of it," said Ashley Shrader, a trainer, to CBS Los Angeles. "She wouldn't come up to you at all."

And when a trainer tried to ride her, "She went into a basically a rodeo-style routine. Head between the knees. Got extremely defensive," Shrader said.

Dixie was underweight when she arrived at the barn. The veterinarian and the trainers also believed that she had been abused.

Initially, Fox thought she had made a mistake.

Every night, she said, she would ask herself whether she made the wrong decision.

But the connection between Ella and Dixie was instantaneous.

"When they first saw each other, it was instant. Love at first sight. And I think that she knew that Ella was there for her and was going to take care of her," Fox said. "Ella has gotten a great deal of strength and confidence from her."

"She wouldn't walk with me or she would try and like bite me sometimes," Ella said.

But Ella wasn't deterred. She was slow and tender with Dixie, usually braiding her hair before they went into the arena, CBS Los Angeles reported.

"I think she likes my personality and I love her," she said.

This past weekend, that bond between the two was cemented when they conquered their first competition.

"I was a mess on Sunday. Just nerves and tears," said Fox.

The two placed fourth, which was better than expected. Ella was more than pleased with the result.

"She got a lot of carrots and a lot of hugs," Ella said. "And even though she couldn't respond, I thanked her and I congratulated her."