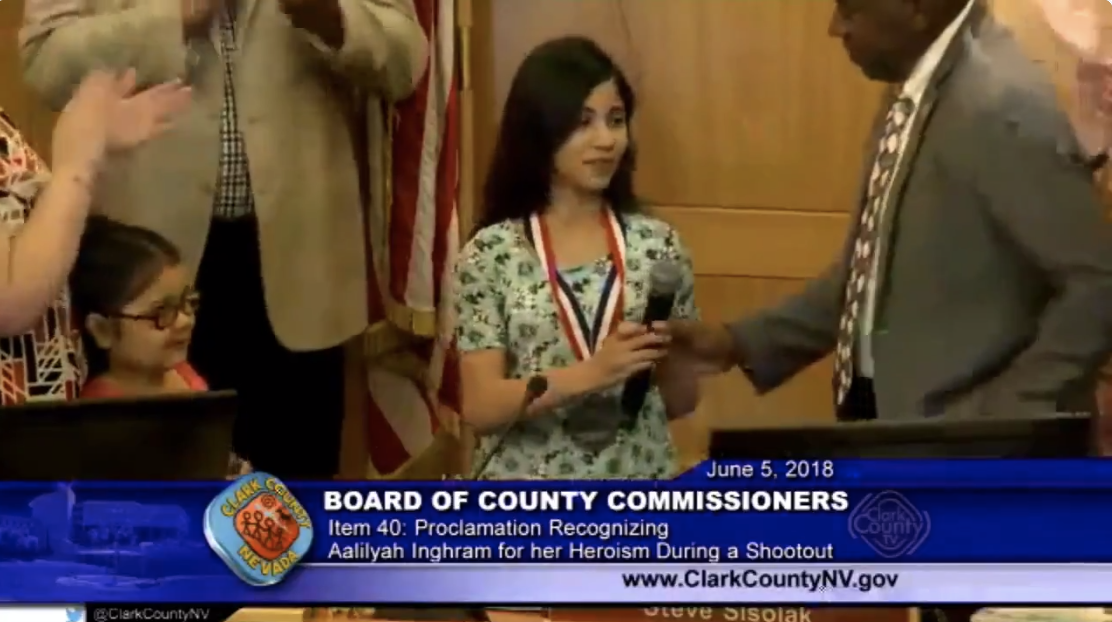 A 10-year-old Nevada girl was accidentally shot last month when she and her family were caught in the crossfire of a gun fight.

Aaliyah Inghram was in a Walmart parking lot with her mom, 18-month-old brother and 15-month-old cousin when two men started shooting at each other. Aaliyah didn't hesitate to react, throwing herself over the two car seats her brother and cousin were sitting in.

She was struck in the back by a bullet.

"My first reaction was to get out. Her's was to jump on her baby brother," Aaliyah's mother Samantha Tygret told KVVU. "She jumped on his car seat when I told her to get on the ground. If she hadn't done that a bullet would have hit him in the midsection."

The 10-year-old survived but will have surgery next month to have the bullet lodged in her back removed. She was well enough to attend a ceremony in her honor last week.

On June 5, Clark County Commissioner Lawrence Weekly honored Aaliyah and declared it "Aaliyah Ingraham Day." The 10-year-old was also given a medal for heroism.

"She literally took a bullet for her brother. I can never repay her for what she did," her mom said at the ceremony.

"Thank you for this award. I hoped that my brother would be OK, and I wanted him to stay alive because he's really young," Aaliyah said in her short acceptance speech.

Tygret also thanked the county for recognizing her daughter's bravery. "I just want to thank you guys because it does mean a lot to us for you to recognize her... I think she does deserve the award. She didn't have to do what she did," her mom said.