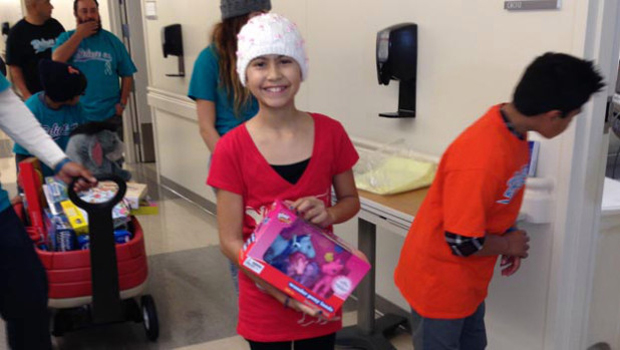 Emily Lomeli was recently diagnosed with immature ovarian teratoma, a rare type of ovarian cancer, and has been receiving chemotherapy treatments at the hospital.

Instead of dwelling on her own plight, she helped organize a toy drive for other kids facing life-threatening illnesses.

“It’s a big day for me because I’m giving out toys to the play room,” Lomeli said. “If you do something good, it feels good.”

Lomeli was joined by her family and teammates on the NV Titans from the North Valley Youth Baseball League.

“Cause I love her and she’s nice and she like, loves everyone,” teammate Noah Ozuna said.

“We treat her as everyone else…the same.  As the coaches would say…she is the toughest one,” teammate Manolo Tafolla said.

As an avid baseball player and fan, Lomeli wears the number 17 proudly and was given a tour of the Dodgers clubhouse and stadium by outfielder Andre Ethier earlier this week.

The coach for the NV Titans’ rival team said his kids joined in to help Lomeli, as well. He even wore her jersey number.

“Before you can call it a rivalry, but now it’s brought us together,” Buddy Rodriguez said.

Lomeli’s coach said it’s obvious why everyone is rallying behind her.

“Have you seen her smile? It’s her smile,” Roger Tafolla said.

Lomeli has one more round of chemotherapy. Her doctor believe she’ll be able to join her team on the field in the spring.

Anyone interested in making a donation to help with Lomeli’s treatment should visit believein17.org.