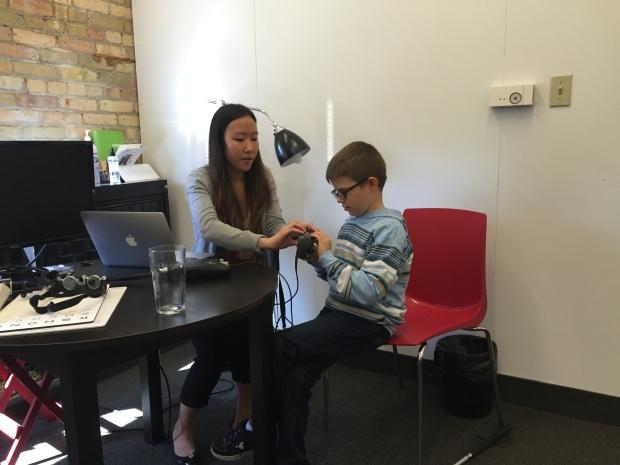 When Benny Francey looked at his mom last Wednesday, something was different. For the first time, he could see her face clearly — and it was enough to bring him to tears.

The 10-year-old, from Selkirk in Manitoba, Canada, normally can’t see much more than silhouettes. He and his younger brother Ashton, 8, both suffer from a rare disease that affects their eyesight called Leber congenital amaurosis.

Back in July, their aunt Amanda Vitt started a GoFundMe for the boys, with the goal of raising at least $15,000 U.S. for a pair of eSight glasses for Benny. Donations have already exceeded that goal.

The glasses have a small camera that captures everything the user is looking at, then displays it on a powerful HD screen close to their eyes.

Last week, Benny finally got to try them on at a clinic in Toronto. “His first word was ‘wow,’” Benny’s mom, Jenna Cason, told CBC News. “It was very emotional.”

According to Vitt, the tears kept flowing when Cason showed Benny family photos. “He could finally point out people in the family,” Vitt told CBS News.

In a video of his reaction, he jokingly told his mom she had a “big nose.” Big or small, it was a detail he had never been able to see before.

Benny was also able to see words on a piece of paper for the first time. Until then, he’d used Braille to read and write. “There was a lot he wasn’t able to read, so now he will have to learn to read written words,” Vitt said of the road ahead.

More than anything, the family was happy to know that the glasses actually worked for Benny — as there was no guarantee he would be able to see with them, Vitt said.

Benny is now patiently waiting for his customized glasses to arrive at his home some time next month, so he can see his mom’s face again and start exploring the world in a new way.

The rest of the money raised will help pay for therapeutic horseback riding for Ashton, who has also been diagnosed with autism and OCD. His eyesight is so poor that the eSight glasses won’t help him, but the family has left the GoFundMe campaign active to raise more money for Ashton’s other needs.