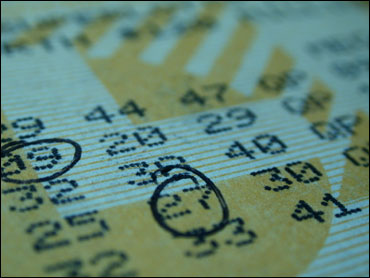 Ten co-workers at an insurance company in New Jersey say they're the winners of a $216 million Mega Millions jackpot.

The group showed off the winning ticket Wednesday afternoon outside the Chubb Insurance office where they work in Whitehouse Station.

According to New Jersey Lottery officials, the single winning ticket was purchased at a gas station in the central New Jersey town of Toms River. However, lottery officials say no one has officially come forward to claim the prize yet.

The winning ticket was sold at Singin Oil in the town about 55 miles east of Trenton. Store owner Taner Cetintas, of Jackson, will collect $10,000 for selling it.

It is the second-largest jackpot in New Jersey history.

On The Early Show Thursday, co-anchor Harry Smith spoke with two of the lucky winners, Joanne Roth and Oscar Oviedo. Both got quickie financial advice from Early Show money maven Ray Martin. Oviedo, who was falling behind on his mortgage, described how it was only the generosity of his co-workers that enabled him to be part of the winners' pool. And Roth said at first, she thought her colleagues were pulling her leg about winning: