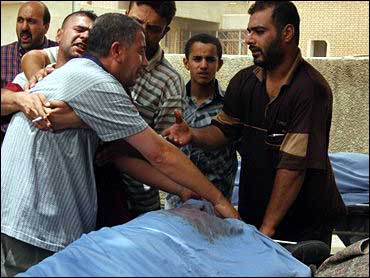 At 6:30 a.m., a car bomb exploded as an Iraqi army patrol passed, killing two soldiers, Saleh said. Three soldiers and three civilians were in both attacks, he said.

Al Qaeda in Iraq claimed responsibility for the attacks in a Web statement, whose authenticity couldn't be confirmed.

On June 15, a suicide bomber wearing an army uniform blew himself up in an Iraqi army mess hall in Khalis, killing 26 soldiers.

Clashes in the north and west of the country followed violence Sunday in which about 60 people were killed in a series of suicide attacks, car bombings and ambushes.

In a news conference Sunday, Prime Minister Ibrahim al-Jaafari criticized U.S. and multinational forces for shooting at civilians who act suspiciously near patrols or military areas, but a spokesman for the U.S. command blamed the problem on the growing use of suicide car bombs as a weapon.

The bloodiest attack Sunday occurred in Baghdad, when a man dressed in civilian clothes detonated two explosive-laden belts among a crowd of Iraqi army recruits, killing 25 others and wounding nearly 50, U.S. and hospital officials said.

It was the deadliest attack in the capital since July 2, when a suicide bomber blew himself up outside a recruiting center in west Baghdad's Yarmouk neighborhood, killing 20.

Al Qaeda in Iraq claimed responsibility in a Web posting for Sunday's attack, but the statement's authenticity could not be verified. In February, a suicide bomber blew himself up outside the same garrison, killing 21 people.

Near the northern city of Mosul, a suicide car bomber rammed into a police convoy carrying an Iraqi brigadier general, killing five policemen, the U.S. military and police said. The senior officer was not injured. Police said they detained three Iraqis on Monday in connection with the attack.

A suicide car bomb in Kirkuk killed at least four civilians Sunday, according to police. A second car bomb was rigged to explode as rescuers rushed to the scene, but it was found and detonated by American troops, police reported.

Two other suicide car bombers struck near Fallujah, killing an Iraqi civilian and wounding a Marine, the U.S. Marines said.