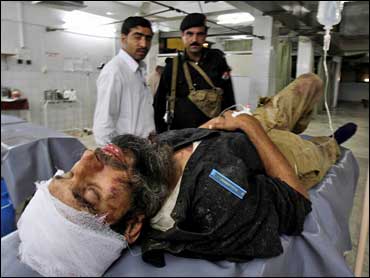 An official says a suicide bomber attacked a group of anti-insurgent tribesmen in a Pakistani tribal region near the Afghan border, killing at least 10 and wounding more than 50.

Government official Sher Akbar Khan says the tribesmen had gathered Friday to plan the demolition of a main militant base in the Orakzai tribal area.

Some 500 people of the Alizai tribe were there when the attacker struck.

"Initial reports suggest that the suicide bomber rammed an explosive-laden vehicle into the gathering," Khan said, adding that the death toll could rise.

Orakzai, which is near the main northwest city of Peshawar, has been one of the more peaceful tribal areas.

Al Qaeda and Taliban militants have established bases in Pakistan's tribal regions. The U.S. has pushed Pakistan to eliminate such sanctuaries. Pakistan has tried to woo the tribes to take stands against the insurgents.

Also Friday, government official Jamil Ahmad accused militants of beheading four pro-government tribal elders Thursday in Bajur tribal region, the scene of the some of the heaviest fighting between Pakistani troops and insurgents.

On Thursday, bombings targeting police killed 10 people and wounded 14 in Pakistan's volatile northwest and the capital - reminders of the challenge facing the country as its lawmakers pursue a national anti-terror consensus.

Pakistan has carried out military offensives against insurgents. Some pro-government tribes have set up militias to fight insurgents.

But in a sign of U.S. impatience with Pakistani efforts, American forces have stepped up their own crossborder assaults on alleged militant targets.

The U.S. is suspected in at least 11 missile strikes on the Pakistan side of the Afghan border since Aug. 23, killing more than 100 people, most of them alleged militants, according to an Associated Press count based on figures provided by Pakistan intelligence officials.

The United States rarely confirms or denies the attacks, which Pakistan's military and civilian leaders have criticized as violations of the country's sovereignty.

"We want them (the United States) to realize that these attacks are destabilizing the situation, and they are not helping them or Pakistan," Pakistan foreign ministry spokesman Mohammed Sadiq told The AP. "They are helping the terrorists."

The strikes are unpopular among many Pakistanis and used by critics and Muslim conservatives to rally support in their campaign to unseat the country's broadly secular, pro-U.S. government.

The most recent alleged U.S. attack took place late Thursday in North Waziristan and killed at least nine people, between six and eight of them suspected foreign militants, intelligence officials said. They said they were trying to establish the identities of the victims.