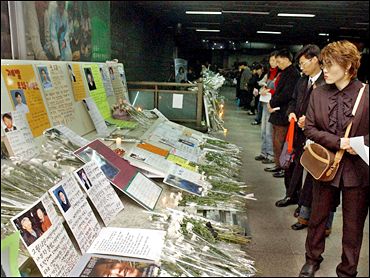 Police investigating a subway fire in South Korea that killed at least 133 people last week have arrested 10 people in connection with the blaze.

Those under arrested include nine subway workers charged with negligent manslaughter, reports CBS Newsman Don Kirk, as well as the man who admits starting the fire by setting a can of paint thinner ablaze with a cigarette lighter.

The 10 suspects were detained late Sunday and early Monday, said Lt. Choi Woong-ju of the Daegu city police department. Two of the subway officials and the arson suspect remain hospitalized with injuries from the Feb. 18 fire.

The fire quickly engulfed a six-car train and then spread to another train which had pulled into the station a few minutes later. The actions of train operators who allowed the second train to arrive are being investigated, and police said they will also look into suspicions that the subway corporation tried to cover up or destroy evidence of a possibly bungled response.

Authorities intend to file charges of negligent manslaughter — an offense that carries a maximum of five years in prison — against the nine officials, another police officer said on condition of anonymity.

The main suspect who allegedly started the fire faces a charge of manslaughter by arson and could be executed if found guilty, the official said.

There is no limit on how long suspects can be detained after a warrant application is filed with a court. However, judges usually respond to such requests within 24 hours.

The devastating fire in South Korea's third-largest city injured 147 people, and officials say that more than 300 people are still missing.

Most of the victims were passengers on the second train whose conductor allegedly fled without opening the doors, leaving victims trapped in the flames. Police said that of the six cars in that train, the doors were open on only two of them.

Only 46 bodies have been positively identified. Many of the victims were burned beyond recognition. Officials said DNA tests to identify victims could take months to complete.

Critics said the tragedy revealed problems with the nation's emergency response system and a potential vulnerability to terrorism. The train's seats and floor tiles were highly flammable, and the lack of adequate emergency lighting left victims groping in the dark after the lights went out.

Seoul will also form a special inspection team to conduct on-the-spot safety checks at each station beginning on Tuesday, Kim said. The inspections are also being conducted nationwide.