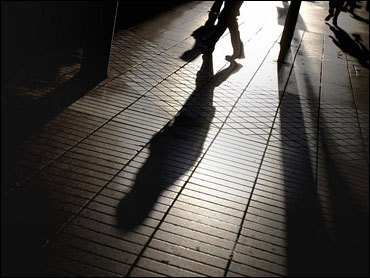 Forty-five year-old Olidia Kerr Day was targeted by a stalker-a man she befriended at her local grocery store and hired to work in her home. One day he showed up with a gun. She escaped to the local police station, frantically calling 911 on her way.

Day was gunned down in the parking lot of the Plantation, Fla. police station.

"He hunted her down like a dog and he killed her," said Edward Day, Olidia Kerr Day's son. "She never had a chance."

An estimated 3.4 million Americans identified themselves as victims of stalking during a one-year span, according to federal crime experts who on Tuesday released the largest-ever survey of the aggravating and often terrifying phenomenon.

About half of the victims experienced at least one unwanted contact per week from a stalker, and 11 percent had been stalked for five or more years, according to the report by the Justice Department's Bureau of Justice Statistics. It covered a 12-month period in 2005-06.

The study was described as a groundbreaking effort to analyze the scope and varying forms of stalking, which had not been featured in previous versions of the National Crime Victimization Survey.

The researchers defined stalking as a course of conduct, directed at a specific person on at least two separate occasions, that would cause a reasonable person to feel fear. The most commonly reported types of stalking were unwanted phone calls (66 percent), unsolicited letters or e-mail (31 percent), or having rumors spread about the victim (36 percent).

More than one-third of the victims reported being followed or spied upon; some said they were tracked by electronic monitoring, listening devices or video cameras.

On The Early Show Wednesday, Michelle Archer, a director at Safe Horizon in New York and a stalking survivor, shared tips on preventing stalking, with co-anchor Julie Chen:
"The prevalence of cell phones and e-mails and GPS devices - this doesn't create more stalkers than used to exist, but it gives the stalker another tool in their toolkit" Cindy Dyer, director of the Department of Justice's Office on Violence Against Women, told Hughes.

But it's a toolkit that police and prosecutors can use, too, and some say that electronic record have been crucial to their successful prosecutions.

Nearly 75 percent of victims knew their stalker in some capacity - most commonly a former spouse or ex-boyfriend/girlfriend.

Women were far more likely than men to be stalking victims, and people who were divorced or separated were more vulnerable than other marital categories. People aged 18-24 were more likely to be stalked than older people.

Victims reported suffering a range of emotions because of the stalking. Their most common fears included not knowing what would happen next (46 percent) and fearing the stalking would continue indefinitely (29 percent). Nine percent of the victims said their worst fear was death.

"All your freedom is taken away. All of a sudden going for a run or coming home by yourself - all those things began to be panic," one stalking victim, who was afraid to be identified, told Hughes

According to the report, about 130,000 victims said they had been fired or asked to leave their job because of problems arising from the stalking. About one in eight of all employed victims lost time from work, either for fear for their safety or to pursue activities such as seeking a restraining order or testifying in court.

Mary Lou Leary, a former federal prosecutor who is executive director of the National Center for Victims of Crime, said she was struck by the persistence of some of the stalking behavior depicted in the report.

"When you consider the impact that stalking has on a victim's life, five weeks is forever - five years is incredible," she said. "They often have to give up their current life, leave their jobs, their homes, establish a whole new identity."

Leary credited law enforcement authorities with taking stalking serious, but she said more needs to be done to strengthen anti-stalking laws and to expand the resources to combat it.

The federal government and all 50 states have enacted laws making stalking a crime, but the laws and definitions of stalking vary widely.

The survey's authors tracked a range of stalking behaviors, including waiting for the victim at a certain location, sending unwanted messages or leaving an unwanted present.

"While individually these acts may not be criminal, collectively and repetitively these behaviors may cause a victim to fear for his or her safety or the safety of a family member," the report said.

About 40 percent of the victims reported the stalking to the police, and about one-fifth filed charges.

The largest previous study of stalking, conducted by the Centers for Disease Control and Prevention in 2005, estimated that 7 million women and 2 million men in the U.S. had been stalked at some time during their life. It found that violence was committed against the stalking victims in at least 25 percent of the cases.