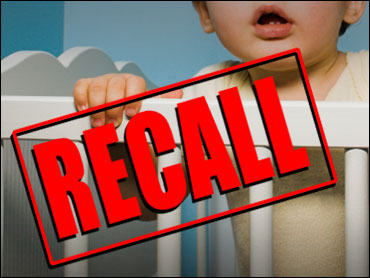 Nine-month-old Liam Johns died in his bed, suffocating when the drop side of his crib came loose and he got stuck between it and his mattress.

"We were in so much shock," Liam's father Chad Johns told CBS News. "It took a very long time before we could sit down and grieve."

About 1 million Simplicity and Graco cribs are being recalled after Little Liam and two other children became entrapped in their cribs and died of suffocation, the Consumer Product Safety Commission said Friday.

Liam had been sleeping in a Simplicity crib.

A year after Liam's death in 2005, six-month-old Edward Millwood was found dead in his Simplicity crib in Georgia.

The two died in the recalled cribs which were sold through May 2007. A 1-year-old child died in a newer model of the cribs, which has not been recalled but is being investigated by the safety agency, CPSC officials said.

In all three deaths, the consumer had installed the drop-rail side of the crib upside down, the CPSC said. This creates a gap in the crib that children can slide into and suffocate.

Seven other infants have been entrapped in the cribs, according to the CPSC. There have been 55 reports of the cribs' drop sides detaching or the hardware failing to hold the side to the crib.

Simplicity Inc., of Reading, Pa., is listed as manufacturer of all the cribs, which were made in China. The recalled cribs were sold nationwide, under the Simplicity or Graco brands, from January 1998 through May 2007. The recall involves multiple models and model numbers.

It's the largest crib recall in CPSC history, and now the one place parents are told they can safely leave their children without supervision is in question.

In fact, according to Cowles' organization Kids In Danger, 30 children are killed and 1,200 are injured every year in crib accidents.

And while these cribs were made in China, in this case she says China isn't to blame:

"The problem is the design flaws that the U.S. manufacturers designed into the product," Cowles said.

"Simplicity strives to make safe products, that is our number one priority. That's why we worked with the CPSC to take this action," Simplicity president Ken Waldman said in a statement.

In a separate recall in June, the commission recalled about 40,000 Nursery-in-a-Box cribs, manufactured by Simplicity, because the assembly instructions incorrectly explain how to attach the drop side.

None of the cribs that Simplicity currently supplies to stores is included in a recall, the company said in a statement.

The commission, however, cautioned consumers who have the newer versions not covered by the recall to check to make sure the drop side is installed right side up and is securely attached. The newer hardware has a flexible tab at the top of the lower track and a permanent stop at the bottom. The older hardware has a flexible tab at the bottom of the lower tracks.

In an earlier Simplicity recall, a 19-month-old child in Myrtle Creek, Ore., died Jan. 6, 2006, in a crib that carried the Graco logo, the CPSC said in February 2006. Mattress support slats came out of the crib, and the child suffocated after getting trapped between the mattress and the footboard. That type of crib had been included in a December 2005 recall of about 104,000 Aspen 3 in 1 Cribs.

The company is offering free repairs for cribs with older hardware. For more information, consumers can contact Simplicity at (888) 593-9274.

Pfizer: Vaccine targeting Omicron will be ready in March