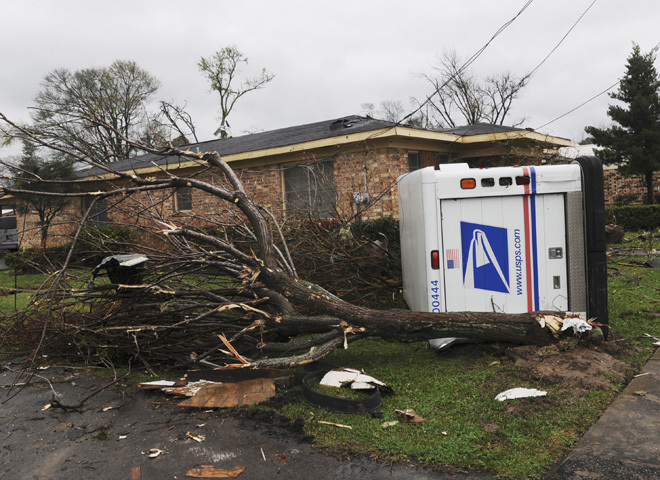 RAYNE, La. - A tornado slammed a southwestern Louisiana town Saturday, killing a woman and injuring 11 other people. More than 100 homes were damaged, many of them destroyed, authorities said, and about 1,500 people were evacuated because of natural gas leaks.

The 21-year-old woman was killed when a tree fell on her house, said Maxine Trahan, a spokeswoman for the Acadia Parish sheriff.

Debris was littered throughout Rayne, the town of about 8,500 people, after a line of violent thunderstorms moved through the area and left behind a swath of damage about 3 miles long.

Trahan said the natural gas leaks, which were later fixed, delayed authorities trying to count how many homes and businesses were damaged. About 1,500 people were ordered out of the area for the night, she said, because officials feared more gas leaks could occur. A temporary shelter was set up at a fire station and officials were working to find other shelters.

The National Weather Service sent a team to investigate and confirmed a tornado had struck the area.

The destruction hit the Acadia Parish town of about 8,500 around 10 a.m. as a line of violent thunderstorms moved through the area.

State Police Trooper Stephen Hammons said several houses have been destroyed or damaged, and the area has been evacuated because of natural gas leaks. Utility crews were going door-to-door to check for leaks, and residents were sent to a fire station to take shelter.

There were reports of at least two ruptured gas lines, Jones said.

Trees and power lines had been knocked down across about an eighth of a mile, said Acadian Ambulance supervisor Troy Guidry. He said at least a dozen people have been taken to area hospitals, one with serious injuries.

A storm system was moving across Louisiana, and Jones said it could make its way through Mississippi and Alabama in the next day or so.

Most of the system that hit Rayne was moving east and would be heading into the New Orleans area in the afternoon, Jones said.

A tornado watch had been issued for southeastern Louisiana, and conditions were still favorable for twisters to form, he said.