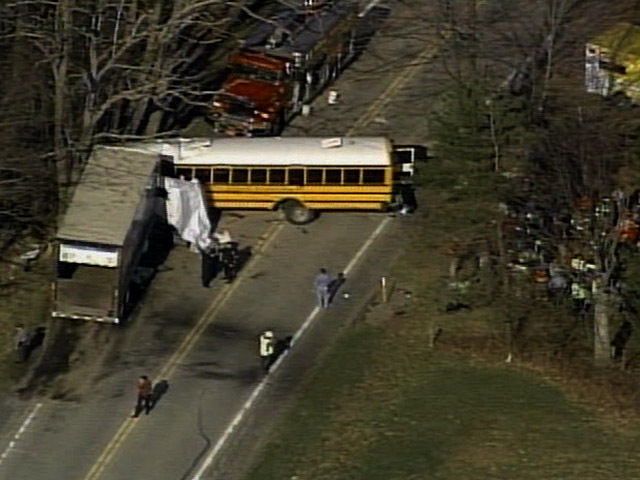 (CBS/AP) ROCKWOOD, Pa. - State Police say the driver of a soft drink truck was killed when he collided with a school bus carrying high school students in western Pennsylvania.

Cpl. Mark Kraynick said the driver, who was not identified, was declared dead at the scene after the accident on Route 281 near Rockwood about 70 miles southeast of Pittsburgh.

It was earlier reported that at least 15 people were injured, authorities said. It wasn't clear how many of the injured were children.

The crash occurred around just before 2:40 p.m. when the truck and school bus taking students from the Turkeyfoot Valley Area School District to a vocational and technical school in Somerset struck each other.

Rhonda Hookover, secretary to the superintendent of the school district, said there were students on the bus but she did not know how many. WATE-TV reported that the students aboard the bus were in grades 10 through 12.

Greg Chiappelli, a spokesman for Somerset Hospital, said eight people arrived by ambulance and another seven to 10 people with minor injuries were taken to the hospital by bus. He did not know the severity of the injuries or say how many involved children.

The Daily American newspaper of Somerset County says medical helicopters were sent to the scene.

Footage from television station WPXI helicopter suggests the vehicles collided on a rural highway. The main body of the bus appeared to be intact and was perpendicular to the truck on the two-lane road.