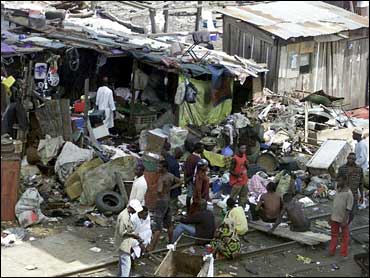 About a sixth of the world's population — nearly 1 billion people — live in slums, and that number could double by 2030 if developed nations don't reverse course and start giving the issue serious attention, according to a United Nations report.

The U.N. Human Settlements Program's report, released Saturday, is the first ever to assess slums and examine how widespread they are. Its main concern is the developing nations in Asia and Africa because the migration from rural areas to cities in Europe and the Americas has largely played out.

"In some developing country cities, slums are so pervasive that it is the rich who have to segregate themselves behind small gated enclaves," the report said.

The report describes slums as poor areas that lack basic services or access to clean water, where housing is poorly built and overcrowded. Developed nations are not immune: According to the report, 54 million people who live in cities in richer nations live in slum-like conditions.

The report says that the worldwide number of slum dwellers increased by 36 percent in the 1990s to 923 million people. At its current pace, the number could double to 2 billion by 2030.

The 310-page document, titled "The Challenge of Slums," traces the economic factors that influence the growth of slums, lays out responses to alleviate them and discusses how slums differ from Rio de Janeiro, Brazil, to Nairobi, Kenya to Bangkok.

"We have all known for a long time that all is not as it should be," said U.N. Under Secretary-General Anna Tibaijuka, who is executive director of the U.N. Human Settlements Program, or UN-Habitat. "Slums are not really worthy of the affluence of the times in which we live."

U.N. officials said that's a clear sign the world is not meeting a goal it set in 2000 to improve the lives of at least 100 million slum dwellers by 2020, and said even that goal is far too narrow in scope. The promise was laid out in a declaration adopted by 189 countries at the U.N. Millennium Summit in September 2000.

"The problem is of great magnitude and countries and the international community basically need to do much more than improving the lives of 100 million slum dwellers," said Naison Mutizwa-Mangiza, chief policy analyst for UN-Habitat.

Developed countries like the United States pay lip service to reducing poverty and the spread of slums, but haven't backed up their promises with cash, said Jeffrey Sachs, a Colombia University economics professor and adviser to U.N. Secretary-General Kofi Annan.

"These millennium development goals will not be achieved without much greater effort from the rich countries working in partnership with poor countries," Sachs said. "It's a lot of talk and not enough action and this report makes this very clear."

The report suggests that addressing the poverty that leads the Third World poor to migrate to slums is necessary, rather than merely improving conditions in the slums.

The study blames the explosion of slum populations to "the cyclical nature of capitalism, increased demand for skilled versus unskilled labor, and the negative effects of globalization - in particular, economic booms and busts that ratchet up inequality and distribute new wealth unevenly - contribute to the enormous growth of slums."

Figures provided by the Human Settlements Program indicate the level of need in the teeming cities of the developing world. Nearly 30 percent of those cities have neighborhoods so dangerous they are considered no-go areas for the police. Only about a third of the cities treat their wastewater.

The report notes, however, a few positive sides to slums. They're a stopping-off point for immigrants who can't afford better housing when they first arrive in a city; they are a cultural mix that often spark new artistic movements; and their crowded environment can sometimes lead to "levels of solidarity unknown in the suburbs of the rich."

The Millennium goals include reducing by half the proportion of people living on less than a dollar a day and the proportion of people who suffer from hunger, achieve universal primary education, eliminate gender disparity in primary and secondary education, reduce by two thirds the mortality rate among children under five, and reduce by three quarters the maternal mortality ratio.

There are also goals pertaining to AIDS, malaria and sustainable development.