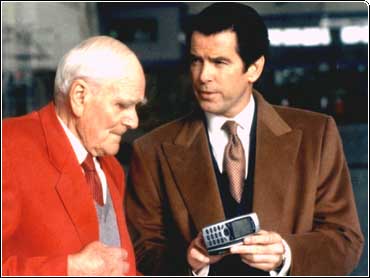 Desmond Llewelyn, who starred as the eccentric scientist Q in all but one of the James Bond films, was killed in a head-on car crash Sunday, police said. He was 85.

The collision, which happened near the town of Firle in East Sussex, came as Llewelyn was returning alone from a book signing. The three occupants of the second car were believed to be in stable condition.

The actor was best-known for his role of Q the gadget expert who equipped 007 with the latest spy tool - from toxic fountain pens to deadly umbrellas - in 17 Bond films dating back to From Russia with Love up to the recent The World Is Not Enough.

Llewelyn was born in South Wales in 1914, the son of a coal mining engineer. He landed the coveted role of Q despite the director's attempts to have the character speak with a Welsh accent.

"My interpretation of the character was that of a toffee-nosed English," he once said. "At the risk of losing the part and with silent apologies to my native land, I launched into Q's lines using the worst Welsh accent, followed by the same in English."

During World War II, Llewelyn was commissioned as a second lieutenant in the Royal Welsh Fusiliers, serving in France. Captured by the Germans, he was held as a prisoner of war for five years. At one point, he was caught by the Germans inside a tunnel the prisoners were digging, and sent to solitary confinement for ten days.

Weightlifter will be first trans athlete to compete at Olympics

Despite achieving near-cult status for his on-screen dexterity with gadgets, Llewelyn said he was a bungler in real life.

"Most gadgets expire or explode as I touch them," he said in an interview in October.

©1999 CBS Worldwide Inc. All Rights Reserved. This material may not be published, broadcast, rewritten, or redistributed. The Associated Press and Internet Movie Database contributed to this report