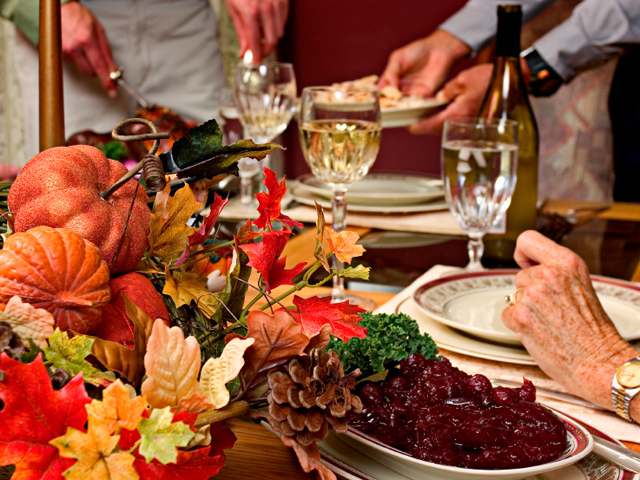 Thanksgiving is a time for family fun and togetherness, but it can also be a time that puts people's health at risk.

"Some of the biggest issues I see during Thanksgiving are the after effects of over indulgence -- eating too much and drinking too much alcohol," Dr. Robert Glatter, an emergency room physician at Lenox Hill Hospital in New York City, tells CBSNews.com.

Beyond added fat, calories and salt there are serious health risks some people might face on Thanksgiving, especially for those with previous medical conditions.

Just what are some of the ways you might harm your health this Turkey Day? Keep clicking to find out.

North Carolina State University food safety expert Ben Chapman told LiveScience that he recommends using plastic cutting boards for meat and wooden ones for fruits and vegetables to ensure they are separate.

To keep cutting boards clean, wash them in hot, soapy water after each use then rinse and dry. Never use the same platter and utensils that were used with raw meat on cooked food.

But, cleanliness starts with you. Before and after handling food, the U.S. Department of Agriculture urges people to wash their hands with warm soapy water for 20 seconds.

"Salmonella, as well as campylobacter and staph food poisoning are bacterial illnesses which can ruin your holiday," Glatter adds. "Washing your hands is the most effective way to guard against potential foodborne illnesses."

Not storing leftovers properly can also cause foodborne illness. Place food immediately in the refrigerator or freezer after use, and throw out any food left out at room temperature for more than two hours. Cooked leftovers and last about four days, according to USDA.

For those who froze their turkey, make sure it's thawed before cooking. The U.S. Department of Agriculture recommends to allow 24 hours of defrosting for every 4 to 5 pounds the turkey weighs. If you forget to thaw, don't panic. Submerge the turkey in cold water (about 30 minutes per pound), changing the water out every 30 minutes.

Make sure you use a thermometer to determine if the bird is done. All turkey meat, including any that remains pink, is safe to eat as soon as all parts reach at least 165 degrees Fahrenheit.

It's not far-fetched that stuffing yourself on Thanksgiving may cause heartburn and indigestion. But, for people with preexisting heartburn or gastroesophageal reflux disease (GERD), overindulgence can be especially dangerous.

Dr. Glatter recommends people with these conditions should avoid eating large portions, and should remain upright on a chair or couch for several hours after eating. Not doing so may worsen symptoms.

People with diabetes need to plan ahead on Thanksgiving, the American Diabetes Association says.

Many Thanksgiving foods are loaded in carbohydrates, so the ADA says diabetics need to watch their intake and shouldn't feel they have to sample everything on the table. For example, if stuffing is your favorite, skip the rolls.

Keep insulin injections or other medications handy. Plan ahead, and check with your doctor if you need to adjust your schedule. Since Thanksgiving meals are sometimes served in the middle of the afternoon, people with diabetes may need a snack during their regular meal time.

"Thanksgiving can be a time of great anxiety for people with diabetes because it is so focused on food," the ADA said. "Don't let questions about what to eat, how much to eat, and meal timing dampen your holiday.

A study last year from Brigham and Women's Hospital in Boston showed that in the hour after eating a big meal, the risk of having a heart attack jumps 10 times. The risk was much higher for people who had heart disease.

"Overeating may also lead to a possible onset of or recurrence atrial fibrillation, sometimes referred to as 'holiday heart syndrome,'" Glatter notes. That's a heart arryhtmia caused by overeating and drinking excessive amounts of alcohol.

The University of Pennsylvania Perelman School of Medicine has more information on the syndrome.

Serious cuts and lacerations are a major risk for those carving a turkey. Dr. Glatter recommends wearing a carving glove, which as an added bonus may help prevent burns when handling a hot turkey.

Any time you eat there's a choking risk, but Glatter says people should pay extra attention around the holidays and avoid swallowing a turkey bone.

Besides choking, he notes people may risk injury to the throat or airway if they consume tiny bones. A retained foreign body that can cause an obstruction, significant pain or a soft-tissue infection.

People may drink alcohol on Thanksgiving. If they're getting behind the wheel after, they're risking their life and those of others.

The Centers for Disease Control and Prevention predicts 1,200 people will be killed and 25,000 will be injured between Thanksgiving and New Year's Day in alcohol-related traffic accidents, according to a study from Alcohol Monitoring Systems, Inc. The study found drunk driving violations jump up 54 percent on Thanksgiving Day, making it the second deadliest day to get behind a wheel after New Years.

Overwhelmed by the holidays? You're not alone. Stress can be harmful around Thanksgiving, potentially leading to depression, headaches and other health woes.

Holiday stress can even trigger the release of hormones that can increase blood sugar and cause harm to diabetics, according to the American Diabetes Association.

People should avoid taking on extra duties to instead focus on spending time with loved ones. Glatter recommends planning in advance and prioritizing tasks. For those who experience anxiety, slow and deep abdominal breathing may help.

"Most of all, remember to enjoy the holidays -- staying healthy may help you ensure a happier and healthier holiday," Glatter says.