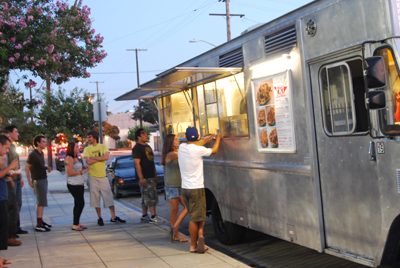 As far as startups go, it doesn't get any scrappier than a food truck. Constantly on the move and masters of doing more with less, successful proprietors know how to be nimble — which is something any entrepreneur can learn from.

CLICK here to learn how to find a devoted customer base -->

Find your niche — and pursue it with a passion

Five months ago, Jay DiEugenio, co-owner and chef of Orange County, Calif.'s BACONMANia, built a bacon-infused menu that ranged from classics such as the BLT to less-conventional items such as deep-fried, bacon-wrapped brownie bites, served on a pillow of whipped cream. Today they serve their bacon treats to a devoted customer base. BACONMANia knows who they're marketing to, and have honed their product to meet demand from that small crowd. "It's bad for you, yes," says DiEugenio. "But, instead of worrying about bad press, we embrace it. People are drawn to our attitude about what we serve."

CLICK here to find out how to avoid failure -->

Even with twenty years of fine-dining experience each, Nicolette Mall and Lisa Carlson were careful not to get ahead of themselves when they became their own bosses. The pair started with a stationary farmer's market table in central Minneapolis, and waited to invest in a truck until they had built up a financial safety net after a year of successful operations. "I've seen other trucks start-ups spend more money than they have. Permits, propane, gas, labor and truck maintenance are more expensive than people think," Carlson says. Five years later, Mall and Carlson are debt-free, and make enough profit in half a year to spend the other half traveling the world.

CLICK here for how to stand out in a crowded market -->

Do what your competitors do — only better

"It wasn't difficult to figure out there was a demand for cupcakes," says Richard Kallman of CupcakeStop. But, before launching New York City's first mobile cupcake shop, he and his team thoroughly analyzed the elements of successful cakes on the market. They looked at trends, conducted endless taste-tests, and scouted talented bakers from places such as The International Culinary Center and The French Culinary Institute. "We developed the best cupcake," he says.

Indeed, The Food Network's Michael Symon named their Red Velvet the best cupcake in NYC in 2010. All of their cupcakes are made from scratch with fresh ingredients, and their ever-changing menu offers innovative flavors unlike anyone else's, such as bacon French toast, as well as classics like red velvet. CupcakeStop now brings in $500,000 in annual revenue.

CLICK here to learn how to set your prices -->

Get good at trial and error

Seattle-based Skillet, founded in 2007, was a pioneer in the gourmet food-truck industry. "There was no model to follow. We had to figure out how to price things, what our trailer should look like, how large our menu was," says founding chef, Joshua Henderson. "I had confidence in my food -- that was stable. The rest was pure trial and error," he says. After several readjustments he nailed it. For example, he originally priced their popular burger and poutine (fries covered in cheese and gravy) meal at $15, but "when we raised it to $17 we saw an effect on the bottom line. It put our 'cost of goods sold' in line and put our profit margin in the range it should be for a restaurant," he says. Skillet now brings in $2 million in annual revenue, and their air-streamed trailer and chef-driven menu are recognized as prototypes for start-up food trucks across the country.

CLICK here for what will make or break your business -->

Go wherever your customers are

The folks at Frysmith knew that their innovative menu, which featured French fries topped with items like kimchi or shawarma-marinated steak, was not going to be enough to draw a sustainable crowd in LA — the hotbed of gourmet food trucks. The owners reached out to local press and bloggers, and kept their growing fan-base updated on their upcoming locations and new menu items through persistent Twitter and Facebook updates. They also picked up and moved to wherever they could find business: "We went to as many concerts and festivals as we could," says Erik Cho. "For people to love our product they need to taste it, right? We were as available as possible, we brought the food to them." Today, their gourmet nosh is heavily sought after. "We're totally inundated with email requests to show up to at events."