LOS ANGELES (CBSLA) - A California woman now faces federal assault and interfering with a flight crew charges after she allegedly attacked a Southwest Airlines flight attendant on a flight from San Diego to Sacramento in May.

The incident occurred, according to prosecutors, after the flight attendant asked the woman to place her mask above her nose. 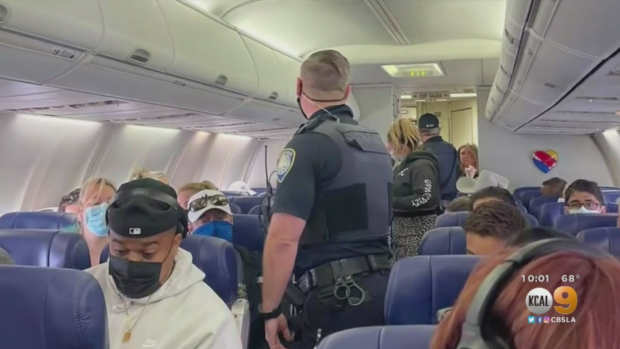 "I kinda side with the flight attendants," Kelly Berman, an airline passenger, said. "They've got to make sure everyone's wearing their mask appropriately, for everyone else's sake."

At John Wayne Airport, passengers flying during the pandemic said everyone onboard is already on edge.

"Flying is hard enough today without all the fights," Lisa Zamosky said, adding that the rules aren't always comfortable to follow. "Like it or not, there's all kinds of rules we have to follow when we fly. We all have to drive on the right side of the road. This is what it is to live in a civil society. Ic an't speak to the charges, but it's just unacceptable behavior and there have to be consequences for it."

Vyvianna Quinonez, the female passenger accused of the attack, faces up to 20 years behind bars and she's been banned from Southwest Airlines.

Quinonez's is just one of a growing number of violent mid-flight outbursts this year.

On Delta flight 1730 from LA to Atlanta, travelers were called into action to help the flight crew subdue a destructive man.

Another passenger was restrained after trying to breach the cockpit on a flight from LAX to Nashville.

Air rage has been an issue for decades, but this surge in conflicts has some flight attendants scared to even work, according to Sara Nelson, president of the Flight Attendants Association.

"We are on track to have 60 times the number of unruly passengers that we might have had in a typical year," Nelson said.

This year, the Federal Aviation Administration said it's received more than 3,000 reports of unruly passengers, mostly related to those refusing to comply with mask mandates.

"Especially in, like, the current climate, people are really frustrated and they just want to lash out in un-responsible ways, but I think it's important that everyone stay safe and doestheir part so we can get through this thing," said Clayton Carroll, an airline passenger.

Quinonez is due in federal court on Sept. 17.