LOS ANGELES (CBSLA) - Tensions are boiling over between Los Angeles County Board of Supervisors and the County Health Department over the indoor mask mandate, and while the state's indoor mask mandate ended Wednesday, LA County's mandate remains in place.

Barger was slamming the county health department's decision not to align with the state on the indoor mask mandate. Wednesday, the state lifted its indoor mandate, but LA County's mandate wanes behind.

"We need to align with the state. If our goal is truly public health, the one way you ensure that people comply is to give them clarity and understanding," Barger added. 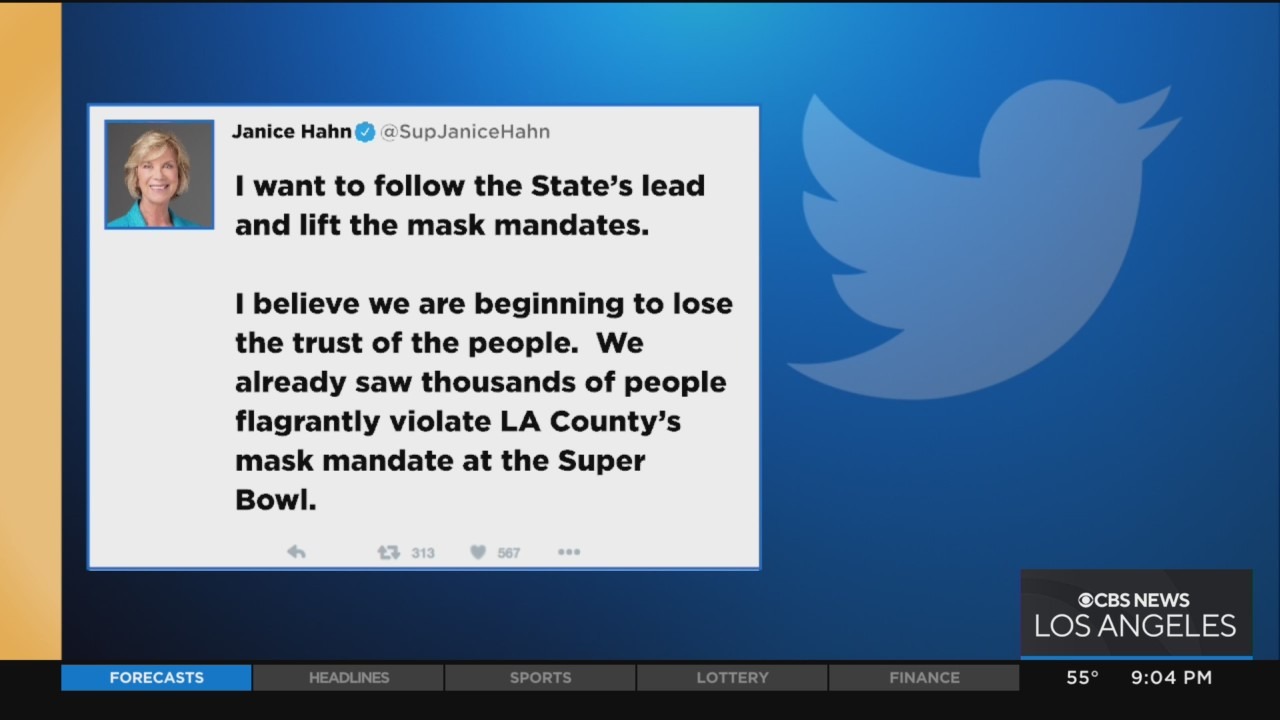 believe we are beginning to lose the trust of the people. We already saw thousands of people flagrantly violate LA County's mask mandate at the Super Bowl."

On Wednesday, the county did lift its outdoor masking rules. Kids at school can now play outdoors with the face coverings, and people can attend concerts and sports events without being required to wear one.

"Until the case numbers go down even more, it will be necessary to keep safety measures in place," said County Health Director Dr. Barbara Ferrer told Supervisors on Tuesday.

Ferrer stressed the continued indoor mandate is to protect hospital workers and the most vulnerable, and while she said case numbers are on a steady decline, infection rates remain relatively high.

"While we are relieved to see significant declines from this recent surge, outbreaks across all sectors are higher than they ever were during the peak of the Delta surge," Ferrer said.

Supervisor Hilda Solis released a statement in support of the county's continued health measures. Last week, Dr. Ferrer said the indoor masking requirements could be over at the end of the March.

"I think the mandates are rooted in science," said Nicolle Fefferman, a Los Angeles Unified School District teacher and parent.

"I am tired of it too. I am doing this because the science says we have to protect each other, and the mask wearing is what is allowing us to be safely at school. As soon as the scientists say it's safe to take of the mask, I will take off my mask," she said.

Asked for comment regarding the criticism from two County Supervisors, the health department referred CBSLA to tomorrow's weekly press briefing, where it's possible they may respond.