SHERMAN OAKS (CBSLA) — A Labradoodle named Stella was stolen during a burglary in Sherman Oaks Friday night, brought to an animal hospital, and then taken again. Stella's owner is now offering $500 for her safe return.

Barbara Goodhill received a call Friday night from her alarm company saying someone broke into her home.

According to Goodhill, the thieves broke into her Sherman Oaks home through a second-story window, ransacked her home, stole jewelry, electronics, and her 4 1/2-year-old, black Labradoodle. She is asking the thieves to return Stella, no questions asked. 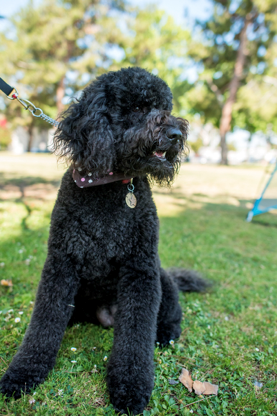 "I'm heartbroken there's only one word, I'm heartbroken," Goodhill said. "I'm scared for her safety. Are they treating her well? Are they feeding her? Did they let her go? Is she wondering some dark alley by herself? I have no idea."

About 90 minutes after the burglary, two men walked Stella into VCA Advanced Care Center in Lawndale.

"They sent an alert out and within an hour I got a message that Stella had been found. They said she was at an animal hospital in Lawndale," Goodhill said.

As the attendant got the microchip information, the men slipped out with Stella and never returned.

"They ran in fear," Goodhill said. "The chip would obviously prove that she had been stolen."

The hospital has surveillance video which Goodhill hopes police can use to track down the suspects.

In hopes to get her dog back, Goodhill has left $500 in cash at The Pet Doctors of Sherman Oaks at 13756 Ventura Boulevard with instructions to give it to whoever returns Stella to the clinic, no questions asked.

"It will be the right thing to do," she said.