SAN JUAN CAPISTRANO (CBSLA) -- San Juan Capistrano is a mission on edge, after protestors defaced and toppled two statues of Catholic priest Junipero Serra across the state this week. 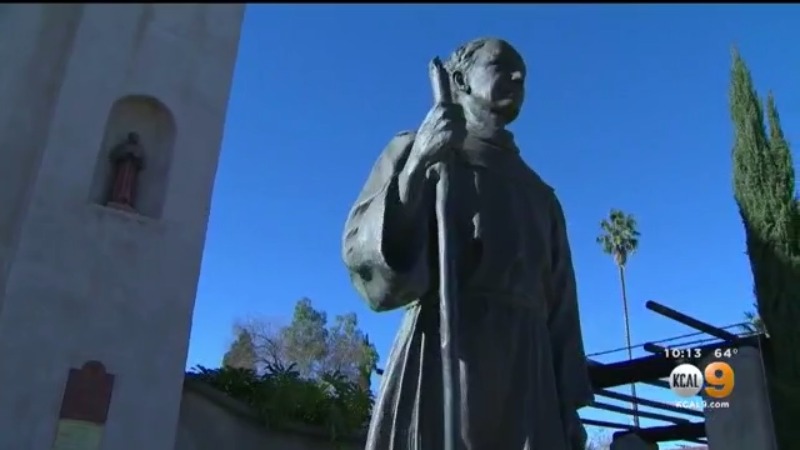 On Tuesday, the mission removed their own statue of the priest to protect it from possible destruction.

In downtown Los Angeles over the weekend, dozens of indigenous activists yanked a statue of Serra off its pedestal on Olvera Street, where L.A. was founded 240 years ago.

Those who brought it down called it a "commemoration of hate, bigotry, and colonization."

"This is just the beginning of healing that needs to occur among our people," one protestor said to the crowd after the statue fell.

In San Francisco on Friday, protestors took down a Serra statue there as well.

UC Riverside history professor Steven Hackel, who is considered one of the world's leading scholars on Serra, said the Franciscan friar is a controversial figure who is seen as both a leader who brought Christianity and civilization to California in the 1700s and an agent of the Spanish Empire that treated Native Americans with brutality.

"He had the will, the administrative skill, the driving force to establish many missions in California," Hackel said."[He used] spanking, or some sort of physical aggressiveness that was their way of correcting wayward people, and, of course, in today's world, we would consider that to be unacceptable."

San Juan Capistrano parishioners are now devastated that a piece of history is gone.

"A lot of crazy bad stuff has happened in our country along with a lot of good stuff," said business owner Kiki Macdonald. "I think the statues being kept in place is a good teaching moment to teach kids about the real part of history."