LOS ANGELES (CBSLA) – After nearly two months of being shuttered due to the coronavirus outbreak, some retailers in Los Angeles County will finally be allowed to reopen their doors Friday, while Angelenos will also be able to hit hiking trails again.

L.A. County Supervisor Kathryn Barger Wednesday announced that trails and golf courses in L.A. County will be allowed to reopen this weekend, with face coverings and physical distancing guidelines remaining in place.

Car dealership showrooms will also be allowed to reopen.

Barger cautioned that the reopening process for L.A. County will likely be slower than others due to its sheer size.

"What's best for other counties may not necessarily be right for Los Angeles County as we are the most densely populated county in the state, our guidelines will certainly look different for others," Barger said.

The exact details are still being finalized, Barger said, and will be posted on L.A. County's website before Friday.

All this comes after California Gov. Gavin Newsom announced Monday that the state will begin moving into the second phase of his four-phase reopening plan, which involves reopening businesses and workplaces that are deemed low-risk because they can easily enact social distancing guidelines.

However, it remains unclear whether L.A. County's reopening plans will also apply to the city of L.A. On Wednesday, Mayor Eric Garcetti announced similar changes for the city just one day after saying he did not believe the city would be ready by Friday.

"We want to make sure that we don't do something reckless, and say, 'Hey, we got out there a week or two weeks early,' just to score political points," Garcetti said.

Ferrer Wednesday laid out a five-stage recovery plan that the county will follow as it reopens. 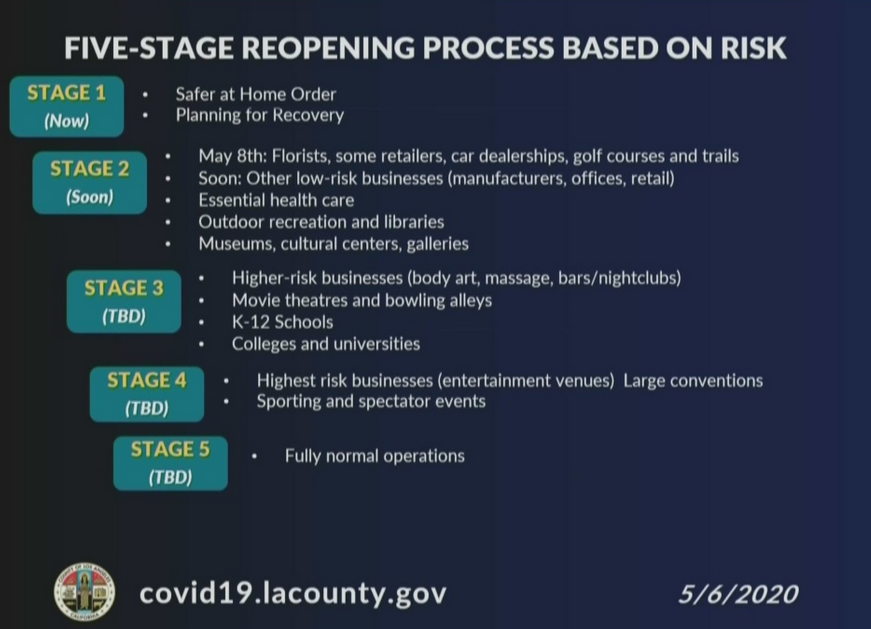 Friday's actions will mark the beginning of stage two of the plan. Eventually, low-risk businesses such as manufacturers and offices will reopen, along with libraries, museums and cultural centers

"As a reminder, all of the business that will reopen in a much modified way that allows for optimum physical distancing and infection control practices, and all of the business are encouraged to make sure that their employees are allowed to continue to telework wherever that's possible and it makes sense," Ferrer said.

Stage three will also include schools and colleges.

Ferrer did not provide an estimated timeline for when the county might enter stage three.

Stage four will see the reopening of the highest-risk businesses, including sporting and spectator sports, entertainment venues and convention centers.

Ferrer emphasized that the reopening process would be with "significant restrictions that allow for physical distancing and infection control practices."