Dr. Christina Ghaly, the county's health services director, said on Monday that there is no immediate concern about hospitals being overwhelmed with coronavirus cases, but if the spread continues to accelerate, it could threaten availability of ICU beds.

Tuesday marked the fourth time in that last four weeks that the daily number of new cases surpassed 2,000. L.A. County announced 2,364 new cases, while Long Beach and Pasadena — which have their own health departments — combined to add 250 more. The county's new total is 88,512 cases.

Public health director Dr. Barbara Ferrer said last week that some of the recent reports of more than 2,000 cases are due partly to backlogs in reporting from a few testing labs. But that wasn't the case on Monday, when she said the increases are now an indication that community spread of the virus is rising.

This rise was anticipated, as the county began reopening businesses around a month ago. No clusters of cases have been specifically linked to recent mass protests against police brutality, but Ferrer said its likely the marches could have sparked more spread.

In addition to the 34 deaths reported by the county, Long Beach reported one additional fatality. The countywide death toll stands at 3,172.

Continued increases in hospitalizations and test positivity rates could raise the possibility of the county re-imposing business closures and stricter stay-at-home orders to avoid overwhelming hospitals.

"Public Health will monitor the data closely to see how increases in cases and rates of positivity affect the number of daily hospitalizations over the next few weeks,'' according to a statement from the county DPH. "Our collective goal is to prevent an overwhelming surge of COVID-19 cases at health care facilities.'' 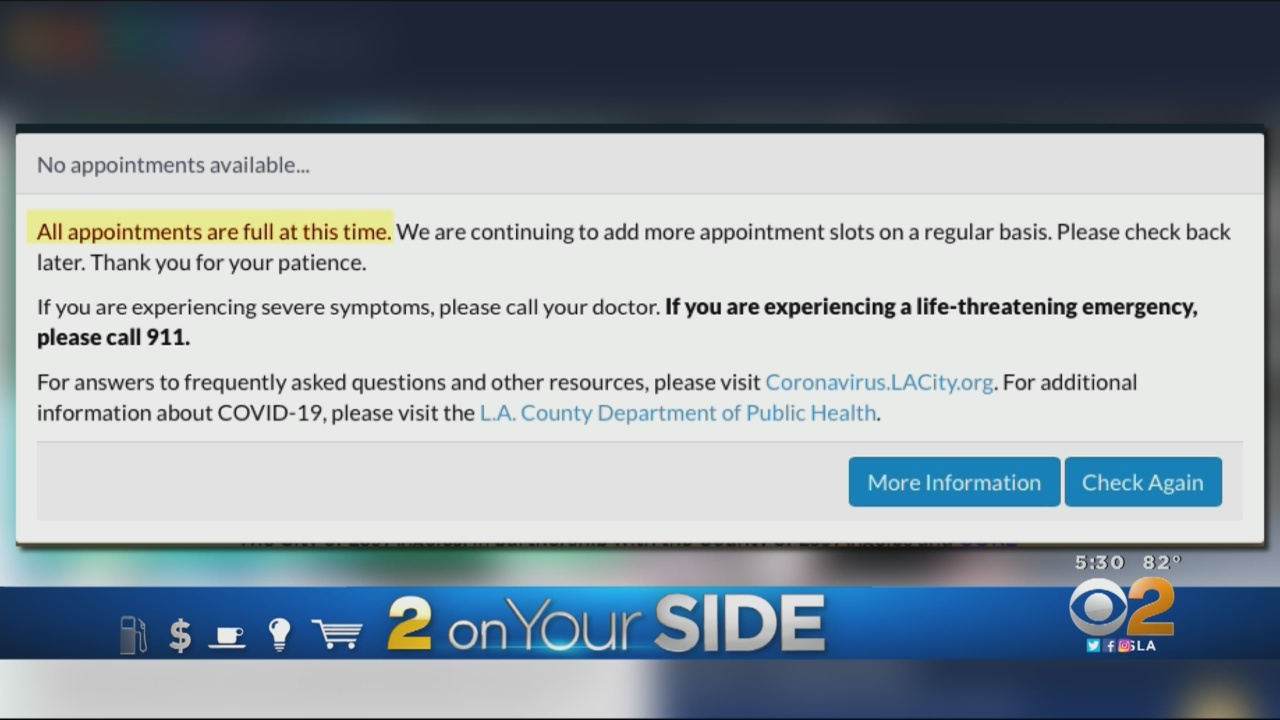 The county also reported a glitch in the online reservation system at area testing sites. County officials said the problem was due to the city of L.A. switching its online registration system to a new vendor, reducing the number of testing sites, and blocking out all appointments beyond Wednesday as the change is made.

According to the county, all testing appointments this week are full.

"The first thing I noticed was that the only appointment I could get was 2 days out and only Dodger's stadium," she said.
She decided to try again the next morning, but ran into more issues.

"So when I went to the website, I couldn't even get on," she said. " It just said that all appointments are full, go to your doctor if you're sick."

Mom-to-be Abigail Philbin couldn't get an appointment either, despite being a few weeks away from delivering.

"I wanted to make sure I was negative before delivery, but I also plan to bring the baby around my parents, who are over 65," she said.

Neither of the women are symptomatic, but Mayor Garcetti has said that symptoms are not a prerequisite to be tested. Garcetti's office is now saying that, due to an increased demand for testing, there is no available appointments for anyone until at least Thursday.

"I think that if there has been that dramatic of an increase of people getting tested either due to exposure or because they're symptomatic, then we need to take a hard look at what we are doing in L.A. County," Schwartz said.

Health officials said by the end of the day on Tuesday, the county's testing reservation site will open up appointments at select sites on Saturday, Sunday and Monday.