GARDENA (CBSLA) - A local community hospital is under fire for how it has treated dead patients who succumbed to COVID-19. 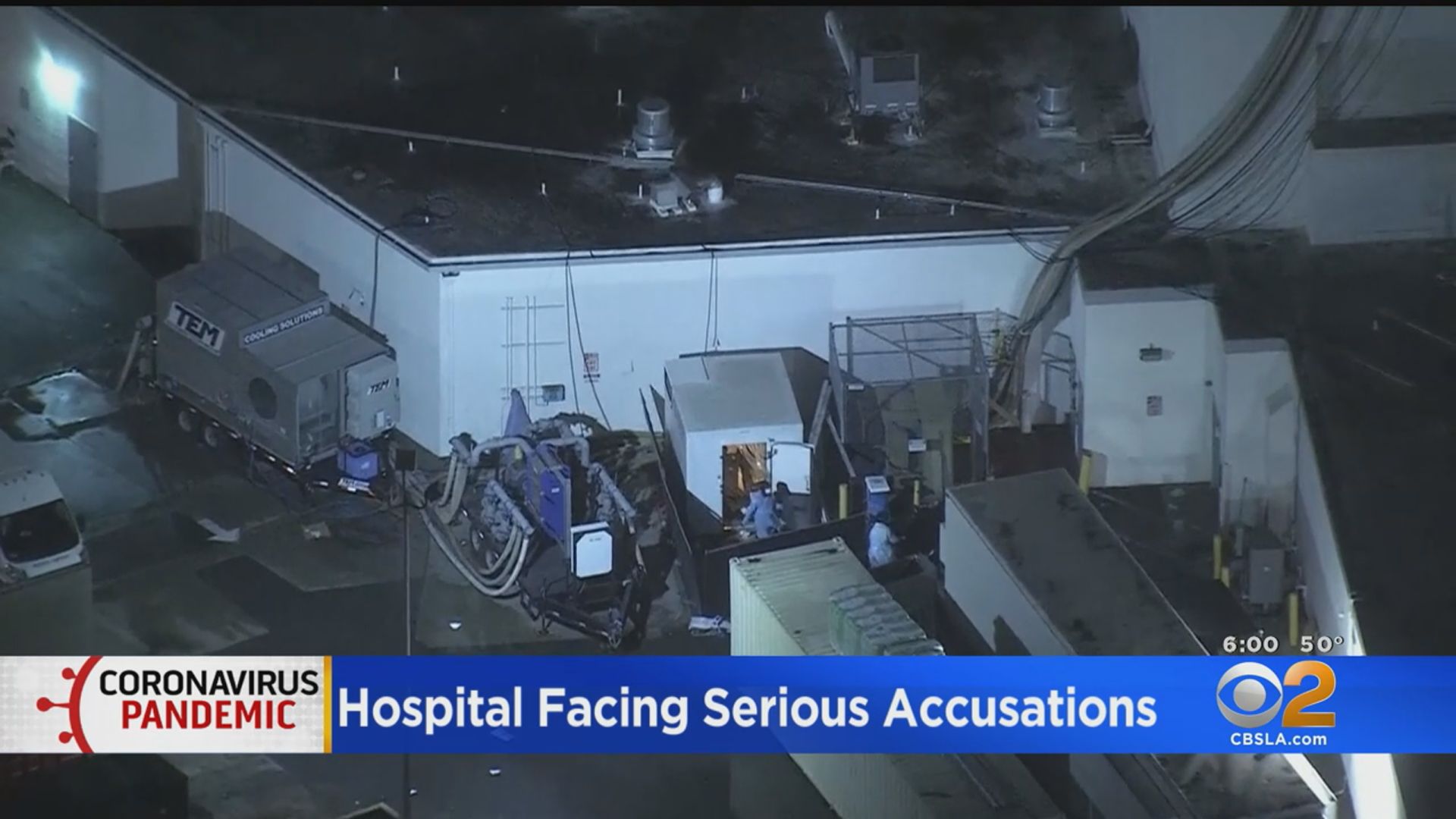 Memorial Hospital of Gardena is being accused of not properly caring for the bodies of dead COVID patients.

Overhead on Monday, Sky9 captured video outside of the hospital where employees could be seen rearranging bodies inside a mobile freezer in a parking lot.

A hospital spokesperson told CBSLA Reporter Nicole Comstock that its morgue inside can hold up to six bodies. During the pandemic, that has been insufficient.

However, one witness who spoke with CBSLA on anonymity, told Comstock that those bodies were left outside in the rain.

"Security had tears in their eyes. They're crying. Some of the security had to leave because they got fluid on their clothes when they did move the bodies," the witness said.

"Because of the overcrowding situation, hospital administrators took action yesterday to organize the outdoor cooling unit in a more orderly fashion," Memorial Hospital of Gardena said in a statement to CBSLA. "Hospital protocol calls upon security guards to assist in the process when mortuaries come to pick up bodies, primarily helping to lift and move the bodies."

But the witness claims she saw body fluid on the sheets and the ground. She insists there is proof that the mobile freezers were not set at the proper temperature.

"Impossible. Those bodies were defrosted. They were decomposing," she said.

Vidal Herrera, who owns an independent autopsy company, says it's illegal to stack bodies the way the hospital was in the photos.

"And I could see a lot of bodily fluids, and right there the pathogens- that can expose security guards and whomever walks in there," Herrera said. "A body should never be there for more than two weeks."

But the hospital has admitted that its kept bodies in the mobile freezer for months. It said that 11 of the 19 people who passed away were not claimed by family members. In addition, Los Angels County hasn't picked them up yet.

The hospital released a statement to CBSLA Investigative Reporter Kristine Lazar on Thursday.

"Memorial Hospital of Gardena continues working to alleviate a situation of overcrowding in its morgue facilities. As of this morning, the hospital had 19 bodies on site, in the hospital's small inside morgue and in a temporary cooling unit outside," the hospital said. "Local mortuaries are filling up at this time, which makes a transfer more challenging. Meanwhile, hospital administrators are working to get a larger temporary cooling unit on site to alleviate the overcrowding."

"The unusually high number of bodies is due to a surge in COVID-related deaths, on top of non COVID-related deaths, in addition to the Public Administrator cases. Because of the overcrowding situation, hospital administrators took action yesterday to organize the outdoor cooling unit in a more orderly fashion. Hospital protocol calls upon security guards to assist in the process when mortuaries come to pick up bodies, primarily helping to lift and move the bodies. While the outside cooling unit was being better organized, the hospital engaged Environmental Services staff to clean the unit. That is why some of the bodies were removed from the unit for a brief period. There was some evidence of fluids leaking from one or more bodies. This is not unusual for bodies that have been in refrigerated storage for a period of month's. The temperature of the cooling unit is confirmed at the required 34 degrees; the bodies are not frozen.