VENTURA (CBSLA) - A Ventura middle school history teacher has come under scrutiny for political comments in the classroom that were recorded by a student, and at least one parents doesn't think the school has taken appropriate action.

"People need to wake up and see the government has way too much power right now," the teacher can be heard saying on the recording.

For Sarah Silikula, the parent of the eighth grader who recorded the comments, it was a lesson she wasn't expecting her son to hear.

Silikua's told her son that if he was ever uncomfortable with what was being said to pull out his phone and start videotaping it, which is exactly what the eighth grader did when his history teacher went on a political rant in class. 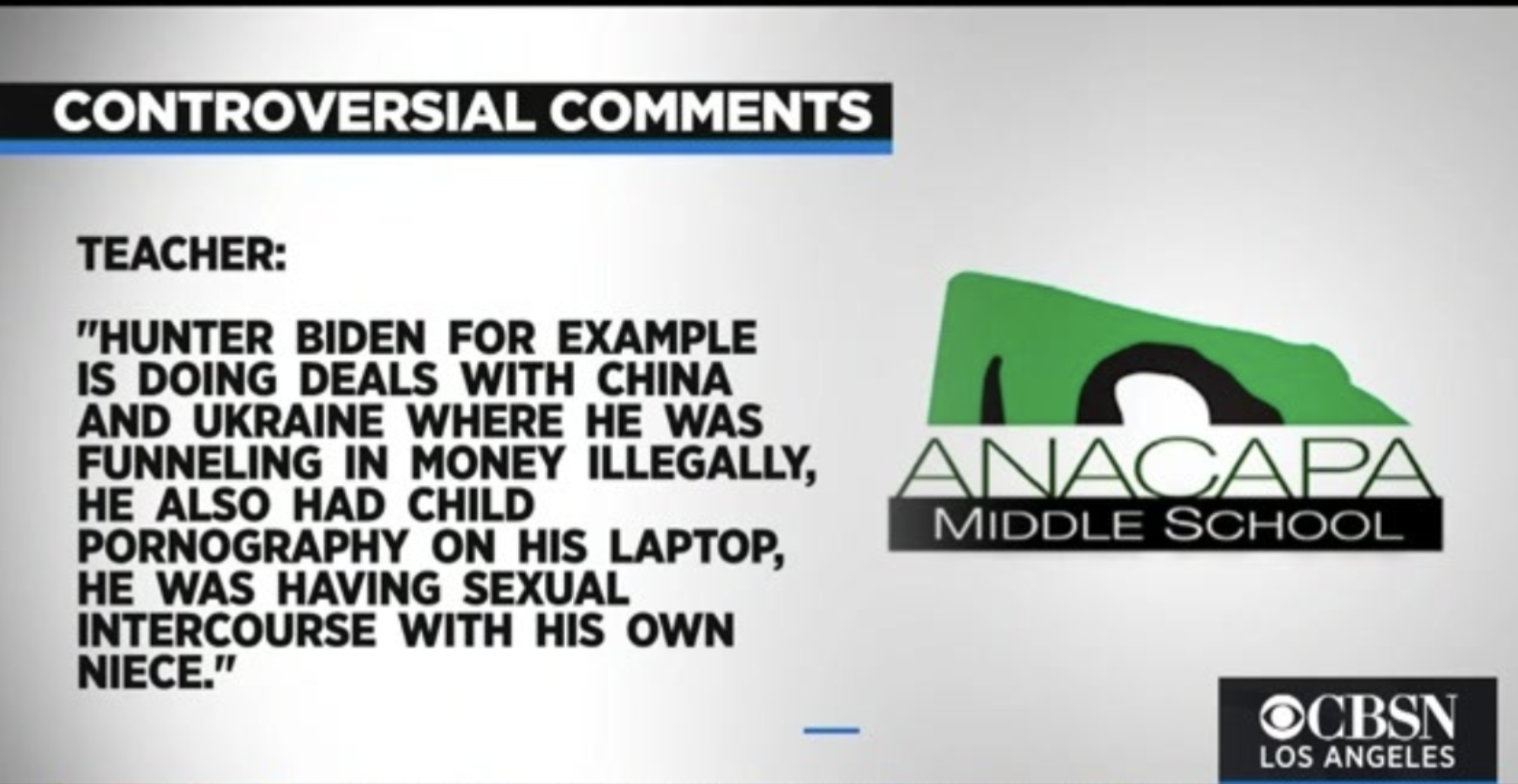 "Hunter Biden, for example, is doing deals with China and Ukraine where he was funneling money illegally. He also had child pornography on his laptop. He was having sexual intercourse with his own niece," the teacher was heard saying.

"I mean, why? Why does that need to be said in this classroom full of children," Silikula asked.

"And he got in the car and he was very upset. He announced, 'I'm never getting vaccinated. I'm never getting anymore shots of any kind. Did you know Trump's still president?'" Silikula said.

In the seven minute recording taken on Oct. 18, the teacher discusses vaccines.

"If you have a baby in the hospital, they don't want to give it back if you're not vaccinated. This is a complete power control threat," the teach was heard saying. 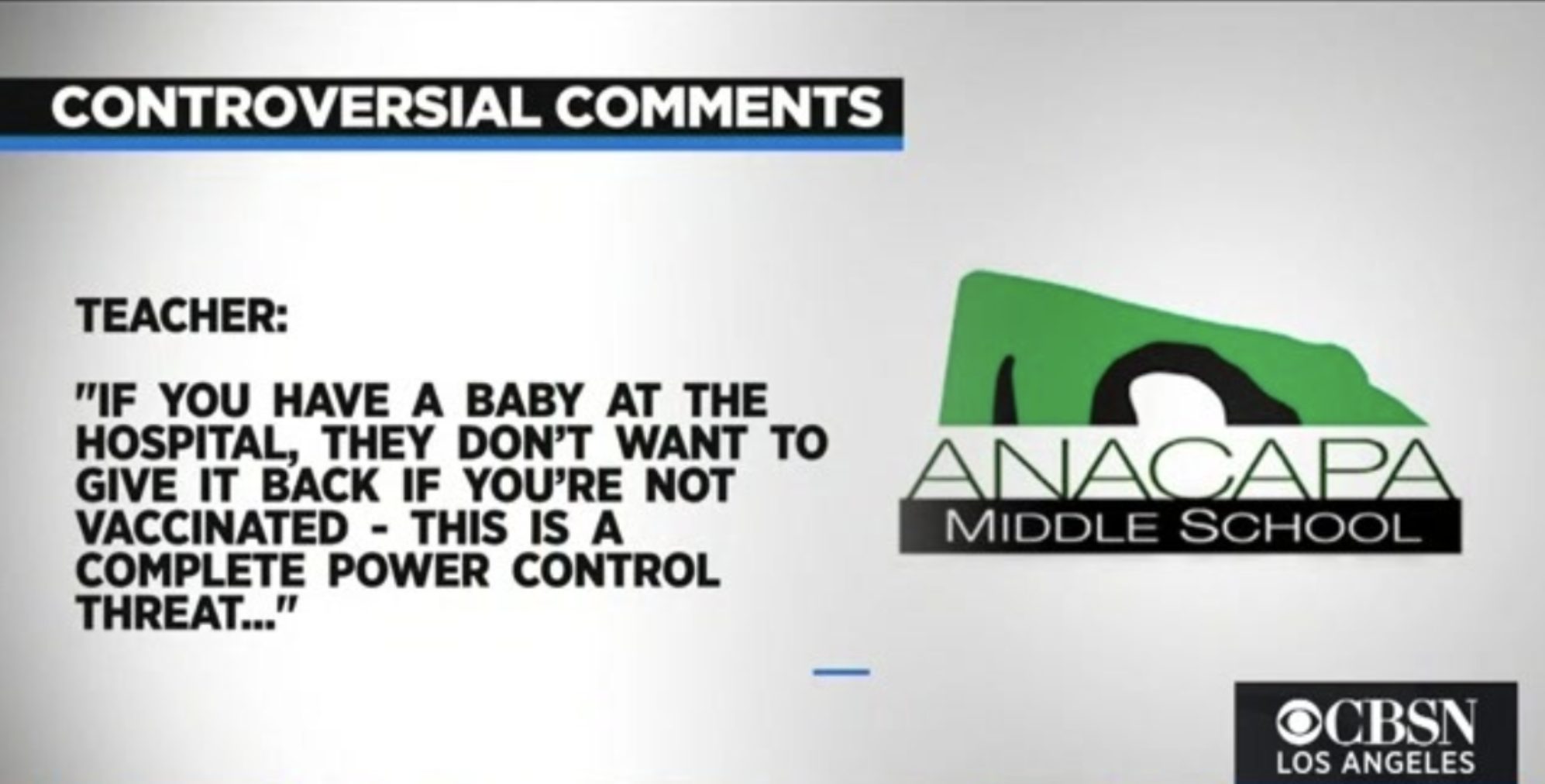 The Anacapa Middle School teacher also made comments about the justice system and the presidential election, where at one point, a teacher's aide can be heard suggesting that she does not need to discuss the election.

"I trusted her to teach him the facts about history and she went off on this rant like a preacher on a pulpit," Silikula said.

It was a moment that Silikula said damaged her relationship with her son because he believes his teacher.

"...when he first got in the car and said, 'Dad, teachers know everything. She's right, dad. You're wrong.' He's damaged. He's hurt. He's scared. He doesn't trust his parents now. He thinks we lied to him," Silikula said of her son.

What upsets Silikua further was that the other parents with childre in the class are unaware of the teacher's political comments in the classroom.

The school district said they did conduct an investigation into the incident and that they do not condone the discussion that took place. They also told CBSLA that they are following the "progressive discipline policy" as agreed to with the teachers' union.

The superintendent told Silikula that her son's entire class was moved to another teacher, but she said it's not enough. She wants to make sure the lesson learned was that a teacher's opinion should never be taught in the classroom.

"Whatever anybody's political belief is, I respect. It's their belief," Silikula said. "Don't impose it on my child who I trusted in your care."

CBSLA has chosen not to release the name of the teacher involved in the incident, as she has not been charged with a crime. The teacher, at last report, was still at the school and had accepted responsibility for her error in judgment.