LOS ANGELES (CBSLA) - An investigation into a company that provides housing for thousands of low-income families in Los Angeles has raised questions about the kind of living conditions residents are dealing with.

The company and its owner have been getting nationwide press with claims that they are making a better life for residents living in their apartments, but CBS2 Investigates visited with some tenants who showed how they're living with rats and bedbugs.

"I know it's a little disgusting," said Maria Cruz as she pulled her mattress back. "These are all bedbug stains. We live with the bedbugs pretty much."

Cruz shares the bed with her two young daughters.

"It's embarrassing. If I had the money take them somewhere else, I would, but I"m a single mother and I don't get help from anyone. And this is disgusting and I'm tired of it," she said. "I'm just...let me show you."

Cruz invited CBS2 into her one bedroom apartment that she rents for just over $1,000 a month. It's where she lives, not only with her daughters, but her mother and father as well.

Along with a leaking ceiling in the only bathroom, the family is dealing with a smoke detector that's falling off the wall and cracked floors in the kitchen where Cruz says rats roam at night. She tries to make it home sweet home, but says it's tough for her kids.

"I'm just tired of the mice. It's disgusting. They look at them. They're terrified to walk in the kitchen because they're freakin' rats," Cruz says.

The building was constructed in the early 1900's. Just about a mile away from the million dollar condos in Downtown LA, residents say they've been complaining for years and nothing's been done even though owners claim to be helping the inner city with "high quality affordable housing."

The building is owned by SOLA. A promotional video touts their work revitalizing hundreds of apartment units in LA's inner city by getting investors to buy into the fund, acquiring buildings and renovating them for low income families. The video even includes glowing before and after pictures.

"Many rent burdened families continue to struggle to get access to high quality affordable housing," according to the company's video.

The efforts have attracted nationwide press, according to SOLA's website, big names, like Oprah Winfrey, whose charitable foundation donated $1 million to a nonprofit set up by SOLA's Foundation to provide scholarships to South LA residents.

What their videos don't show is the building where Cruz and others live. Drones, flown by CBS2, showed the back of the building, which seems to be precariously separating from the main structure.

One resident who did not want to be identified on camera says she's been collecting bedbugs in plastic bags all year as proof of what she's dealing with.

"Mommy, mommy, look at my foot," is what Catarina Mateo Miguel says her two daughters screamed after they were bitten by spiders, leaving large marks on their legs.

There are also cockroaches.

While Rosalva Ariaz cooks in her kitchen, sticky traps catch dozens of cockroaches a few feet away. Others survive and crawl around the sink.

Arias says that sometimes when she's cooking, the roaches come right out of the stove.

CBS2 found the building has been written up by the county health department numerous times for roaches and bedbugs. The health department claims that the roach violation was abated in July, but there were plenty of them during CBS2's visit.

Other SOLA owned buildings have also had issues.

Lawyers have sued on behalf of tenants in four SOLA owned buildings, alleging their apartments are "grossly uninhabitable, unsafe and unhealthy."

According to tenants attorney Victoria Ersoff, it doesn't add up.

"Hypocrisy. You saw it yourself. They're not doing any favors to South Central," she says.

The public relations team for the CEO of SOLA, Martin Muoto, cancelled an interview with CBS2 at the last minute, instead opting to send a statement, saying in part:

"Due to COVID and other mitigating factors, there have been occasional delays of our maintenance techs and exterminators entering residences...We are aware of the complaints by the tenants in this building and have already begun to address them."

However, records show SOLA related entities have owned the building where Cruz lives since 2018, well before COVID, and she says nothing has been done.

The company did send repair people to some apartments to survey the conditions, after the CBS2 investigation. It remains to be seen if all the repairs will take place. 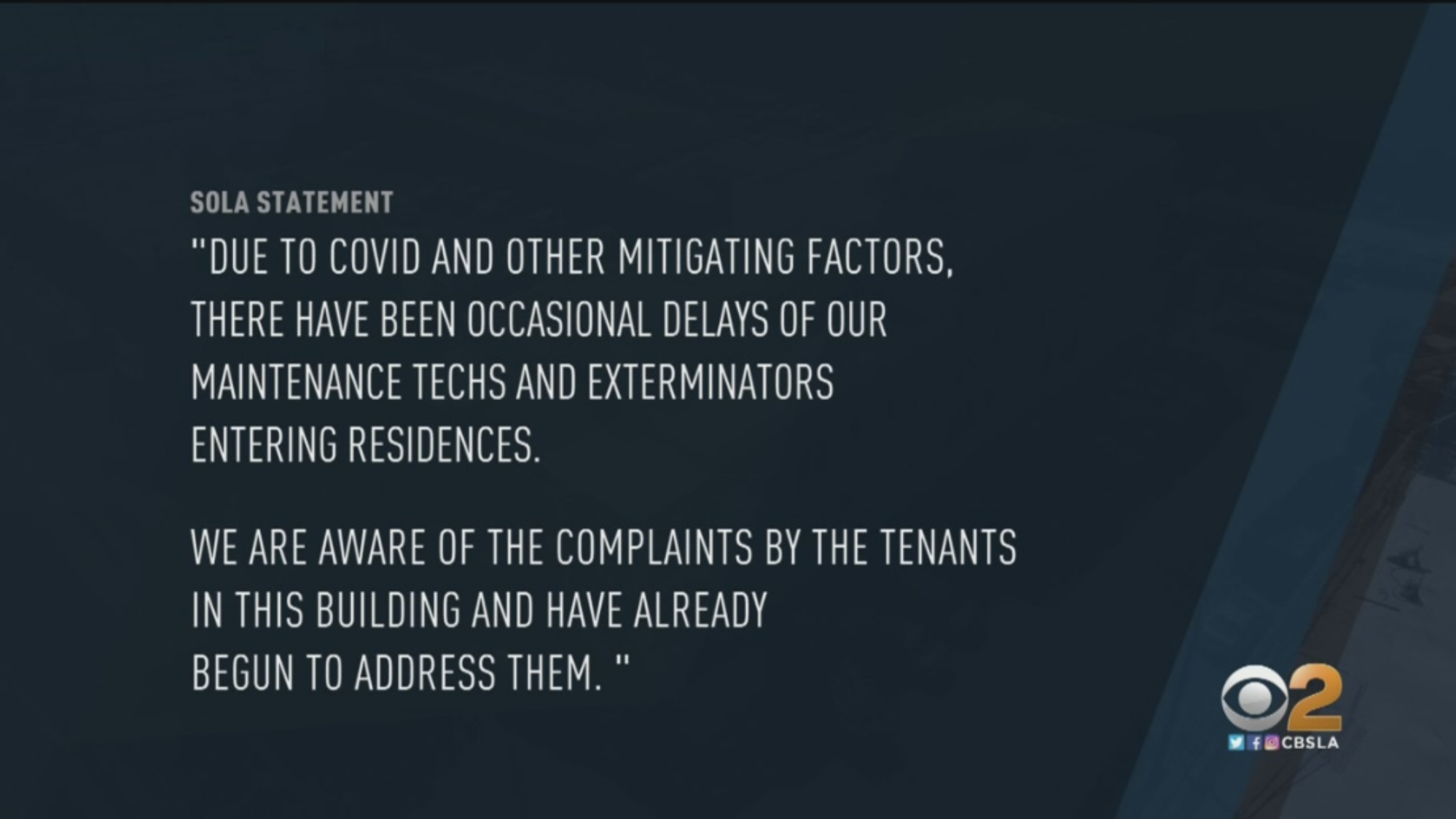 "Over the last several years, SoLa has invested millions acquiring and improving over 150 buildings in some of LA's long neglected communities such as South Central LA, Watts, and Compton, and we currently house more formerly homeless residents than any other company in Los Angeles.

We strive to provide high quality living conditions for all residents. Due to COVID and other mitigating factors, there have been occasional delays of our maintenance techs and exterminators entering residences as expeditiously as they had before. We are aware of the complains by the tenants in this building and have already begun to address them.

This coverage seems to only focus on a small number of units among the thousands that we manage and is not representative. During COVID, we have worked tirelessly to assist its tenants with over $500K of rent relief, dozens of scholarships to children in South LA, vaccination clinics to hundreds of tenants, delivering over 150 tons of free food to our residents, and providing free internet and Chromebooks to 500 families."