DETROIT (WWJ) - Hundreds of people were in attendance Tuesday at a memorial service for Jane Bashara at the Grosse Pointe Memorial Church, and it wasn't just friends and family.

Leon Jones of Detroit did not know Bashara, but felt moved to be at her memorial service to pass along his condolences for what he said is a tragedy.

"I mean, we've gotten to a point in this life where life really doesn't take on any value. And we tend to value life, I guess ... everyone who's gathered here," Jones told WWJ's Ron Dewey. "The good thing, I guess, is her death brought so many people together." 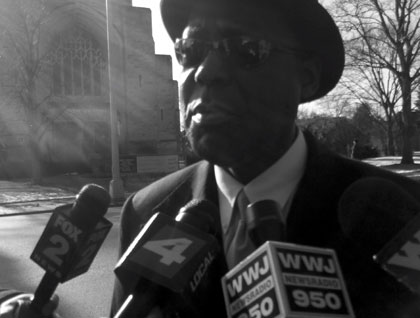 The services included traditional hymns, remembrances, the back of the program included a quote from Martin Luther King in one of Basahra's favorite books, "The Secret": "Take the first step in faith. You don't have to see the whole staircase. Just take the first step."

Meantime, there are reports that a person with new information has come forward in the investigation into the 56-year-old Grosse Pointe Park marketing executive's murder.

And, earlier Tuesday, police said developments could point to a second suspect in the case.

Jane Bashara's body was found in the back of her Mercedes-Benz SUV parked in an alley at Pinwood and Arnott in Detroit last Wednesday. Her husband had reported her missing the night before.

WWJ's Marie Osborne is following this story. Stay with WWJ-AM 950 and CBSDetroit.com for the latest.

- More on the investigation at this link -