CHICAGO (CBS) — A quadruple amputee, a woman with a spinal cord defect, and a five-year-old who struggles to walk 100 feet. All three were denied insurance coverage on wheelchairs, even though doctors said this equipment was medically necessary.

These three aren't alone in their struggle — CBS 2's Tim McNicholas uncovers the state lacks of oversight over denials with insurers across Illinois.

Medical records from the Shirley Ryan AbilityLab say Martina has a "complex vascular malformation," a "leg length discrepancy," "chronic pain" and a "history of cellulitis." Simply put, her pain has been so severe that it's led to hospitalizations and a surgery.

The day we met with Martina, she decided to walk home with her mom's help, but she didn't make it out of the park before she fell as she tried to get back into her wheelchair, which was loaned to her by a local charity. Her mom says she fell partly because of her fatigue and partly because the wheelchair is too big for Martina.

"She falls down and gets hurt frequently due to her abnormal gait and the inability to walk correctly," Patricia said.

She also says Martina needs her own chair, one that fits — and her doctors agree.

In fact, these medical professionals determined a wheelchair is a medical necessity, which was clearly explained to BlueCross BlueShield of Illinois (BCBSIL), the Roon family's insurance provider, in November 2019 and again in April 2020.

But both times, BCBSIL denied Martina a wheelchair. Their logic? She can walk a little — so a wheelchair isn't necessary.

"I was kind of dumbfounded," Patricia said. "She can't walk long distances, her quality of life is less, she can't play with her friends, and she can't run around."

A Pattern Of Inexplicable Denials

The Roon family reached out to us after seeing our story on Abla Gharib — a quadruple amputee.

Gharib fought with BlueCross BlueShield of Illinois over a power wheelchair after being denied twice, all while she used a loaner with a broken armrest and backrest.

A BCBSIL employee who never met her wrote "the patient is able to walk a little" with prosthetics and "might still be able to move a wheelchair" with her arms in the denial letter.

"It's unfortunate some of the insurance companies put profit ahead of health, and it shouldn't be the case," Gharib said.

Days after a CBS 2 report on Gharib's battle last August, the insurance giant suddenly agreed to pay for a power wheelchair.

"Do you think it should get to that point where you have to call a journalist?" CBS 2's Tim McNicholas asked Gharib.

"Absolutely not," she responded. "I had to go through all the struggle. It was very emotional."

Gharib's inexplicable denial isn't the first we've seen. Back in September, CBS 2 reported on Patrick Stein, who suffered from a massive stroke more than 10 years ago, leaving his entire body — with the exception of his eyes — completely paralyzed.

For years, his insurance provider, BlueCross BlueShield of Illinois, covered 24/7 private-duty nursing. In 2019, BCBSIL told the family that coverage was ending.

Unfortunately, this fight is one the Stein's are all too familiar with. In 2013, CBS 2 Investigator Brad Edwards exposed Patrick's first battle for coverage. Back then, the state sued the insurance giant on behalf of Patrick's family and others with similar medical needs and were hit with a $25 million fine.

But that fine didn't seem to leave a lasting impact as Gharib, Martina and Patrick are a few of the many fighting for life-saving coverage.

Shirking Their Responsibilities To The Consumer

Bob Shea runs a nonprofit called "Devices 4 the Disabled," which gives medical equipment to people in need — oftentimes because their insurance provider refuses to cover it.

Without coverage, some power wheelchairs can cost tens of thousands of dollars.

"Unfortunately for the bad actors in the industry, they have a real profit incentive to deny claims," Shea said.

He says insurance companies often ask his nonprofit to provide their clients with medical equipment like wheelchairs. Essentially, they shirk their responsibilities and pass the burden onto Shea.

"How do you respond to that?" McNicholas asked.

"No," responded Shea. "Give them the equipment, they're paying you to cover for that."

We wanted to know how many people complain to the state about being denied medical necessities, so we sent a Freedom of Information Act to the Illinois Department of Insurance to obtain this data.

The numbers revealed that the company with the most complaints is also the state's largest insurer — BlueCross BlueShield of Illinois.

Since 2015, it's received 436 complaints, which is five times more than any other insurer.

The state also marked 66 of those complaints as confirmed violations, which is also the highest total in Illinois.

The Illinois Department of Insurance tells us its follows the National Association of Insurance Commissioners' recommendations for confirming a complaint.

"A confirmed complaint is a complaint that the state regulator determines that the insurer, licensee, producer, or other regulated entity committed any violation of:

Since BlueCross BlueShield is the largest insurer in Illinois, it stands to reason they have the most complaints. We also found dozens of complaints about other companies. But advocates like Shea argue there isn't enough oversight for any of the state's providers — and the Illinois Department of Insurance even tells us they have ">limited jurisdiction over claim denials for medical necessity."

"The Department has limited jurisdiction over claim denials for medical necessity, including complaints filed by consumers challenging decisions/denials on the grounds of medical necessity. The Department's role is to ensure the insurance carrier handles the appeal process in for accordance with Illinois statutes, regulations and policy provisions."

Many consumers are unaware that filing a formal complaint with the state is even an option.

Kim Brown is one of them. She battled BCBSIL for a kind of specialty wheelchair known as an "ultra lightweight" for more than two years. Brown lives with spina bifida and paraplegia. 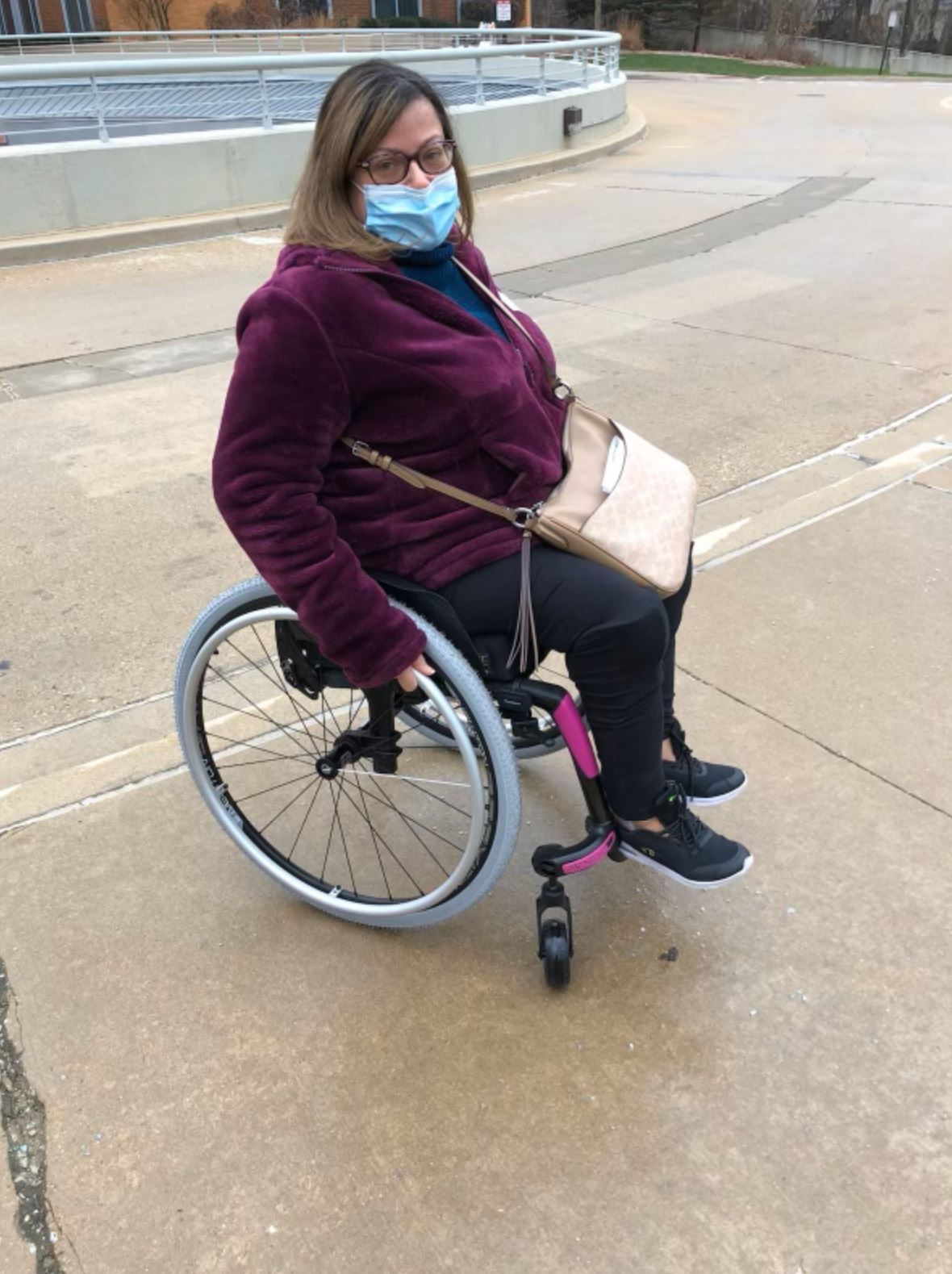 "This isn't a luxury, this is a necessity," Brown said.

Brown says the reason she finally obtained a wheelchair was because she had someone in her corner. She says an executive with a wheelchair provider secured a meeting with a BlueCross executive and convinced them to cover the chair in late 2020.

Even with an ally, a denial means a long and frustrating appeals process. After multiple appeals, the claim is sent to an outside agency for an external review. If a denial is overturned in that phase, patients have often already struggled for months, or sometimes more than a year, in a broken wheelchair or a loaner that doesn't fit.

A Lack Of Accountability

When it comes to laws and accountability for insurance providers, those waters can be murky at best.

Even the legislators we reached out to on this issue were short on solutions, and some struggled to explain what the state does to crack down on wrongful denials.

"We understand they have to have the right to deny unreasonable claims — nobody is saying they shouldn't have that right," Shea said. "But there has to be a consequence when it's blatant and obvious."

One enforcement tool the state does have — Market Conduct Exams, which are reviews of insurance companies.

Despite all the complaints BlueCross BlueShield of Illinois received, the state's Market Conduct Exams make no mention of wrongful denials on medical necessities.

The state did, however, find the insurance company took too long to decide some claims and didn't provide a written explanation to claimants for delays. Those violations included claims for durable medical equipment like wheelchairs. The penalty for these violations: $320,000 in 2018.  BCBSIL's parent company, Health Care Service Corporation, profited four billion dollars that same year.

Despite repeated requests, neither BCBSIL nor the Illinois Department of Insurance would agree to sit down with us for an interview.

Back in August, when we first started asking questions about denials on wheelchairs, a spokesperson for BCBSIL sent us an email stating:

"Benefits coverage, including benefits for motorized and specialty wheelchairs, is based on a member's specific benefit policy.

To protect the privacy of our members, Blue Cross and Blue Shield of Illinois does not disclose their personal or benefit information. Our members are at the center of all that we do and we are committed to providing all of our members access to quality health care consistent with the terms of their benefit coverage."

Shortly after Martina's second denial, her father lost his job due to the pandemic. Now, the Roon family is enrolled in a new insurance plan with BlueCross BlueShield National.

When the pandemic slows down, they plan to try again with their new plan, which will require a new doctor's evaluation, a new claim, and a new challenge. All Martina can do is keep pushing.