(CBS) -- Like millions others across the United States, I needed to get a Real ID. I knew it would be a time consuming pain and preferred not to take a day off or waste a Saturday at the Secretary of State's office.

So I asked the powers that be: How about if I get a Real ID on company time and write about my experience for cbschicago.com. They fell for it. So here is what happened during the 108 minutes it took to apply for the ID at the Thompson Center today.

The day before, I went to the Real ID website to print the checklist of documents needed. You need to bring several different items, to fulfill several different categories of identification. Don't skip this step! Otherwise you will not know what to bring. If you don't have the right stuff, they will send you away. And you won't know until you waited in the long line. So don't skip this step! In my case, I brought my passport, W-2, bank statement, credit card statement and "non-real ID" Illinois driver's license. But there are other options as well. And there are restrictions, like bank statements have to be dated within 90 days of the application date. Carefully check the checklist.

I can't stress this enough. 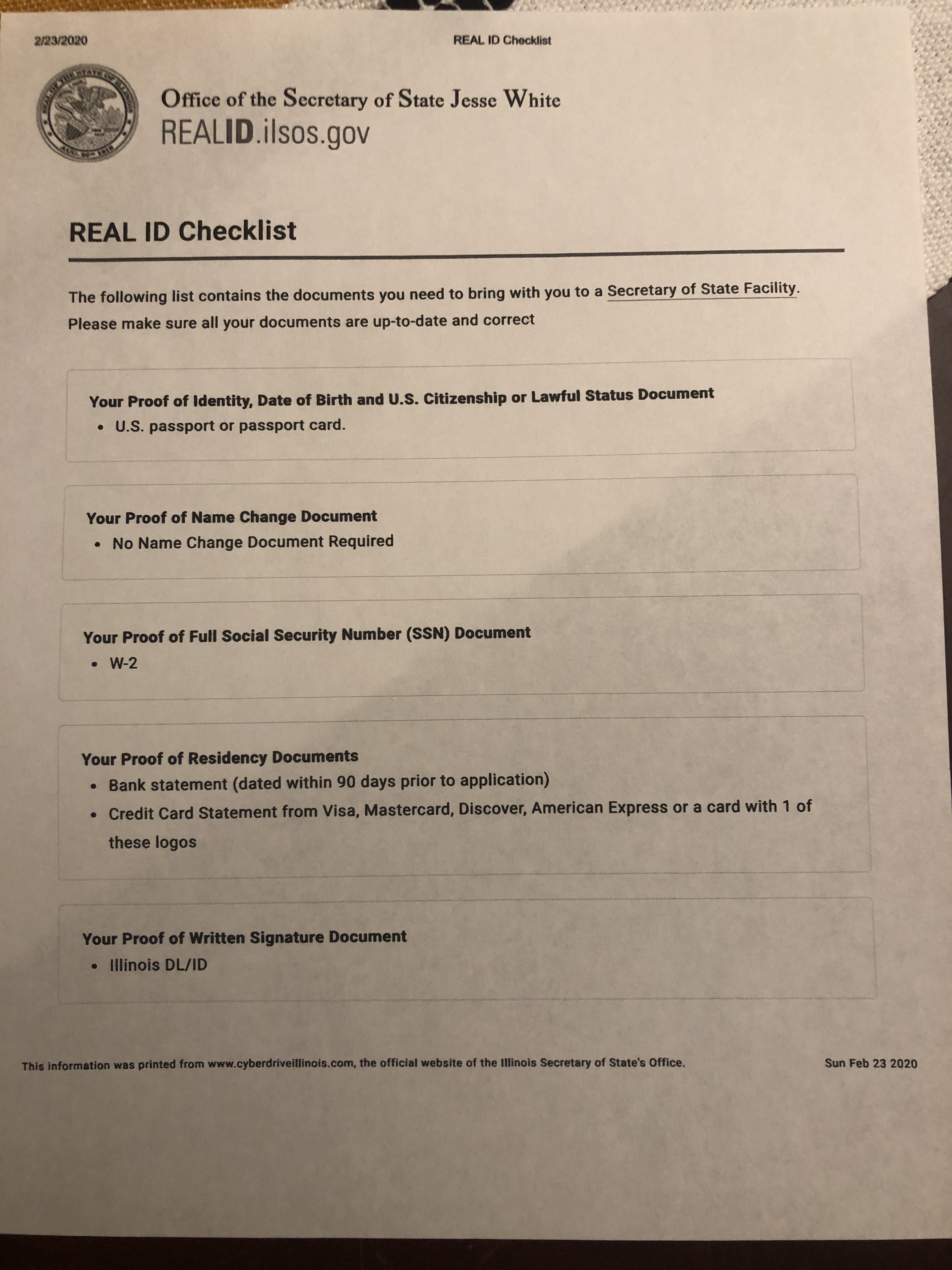 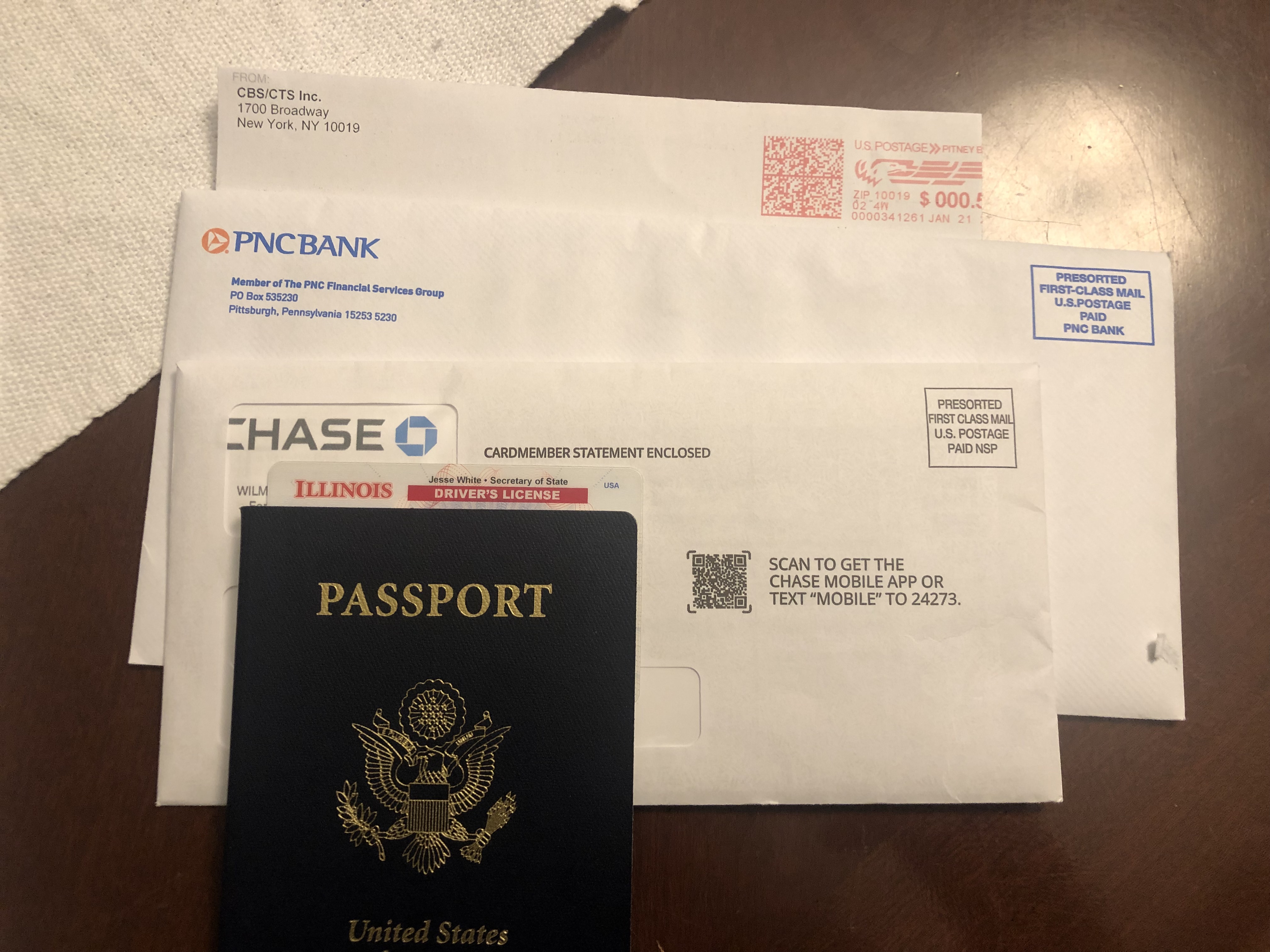 9:59 a.m. I arrive in the basement of the Thompson Center to see a long line. It's divided into two sections. One just waiting to get into the door at the Secretary of State's office. Then the much longer line, that snakes its way along a wall. State employees keep the two lines separate so folks can walk in and out to the food court, CTA station and escalators to head upstairs. Some people in line are sitting in chairs actually there for food court diners. But, hey, you do what you need to do, right? A guard announces that expectant mothers, seniors and the disabled need not wait in line. Instead, they can head to the front of the line. A couple people happily oblige and skip the wait. 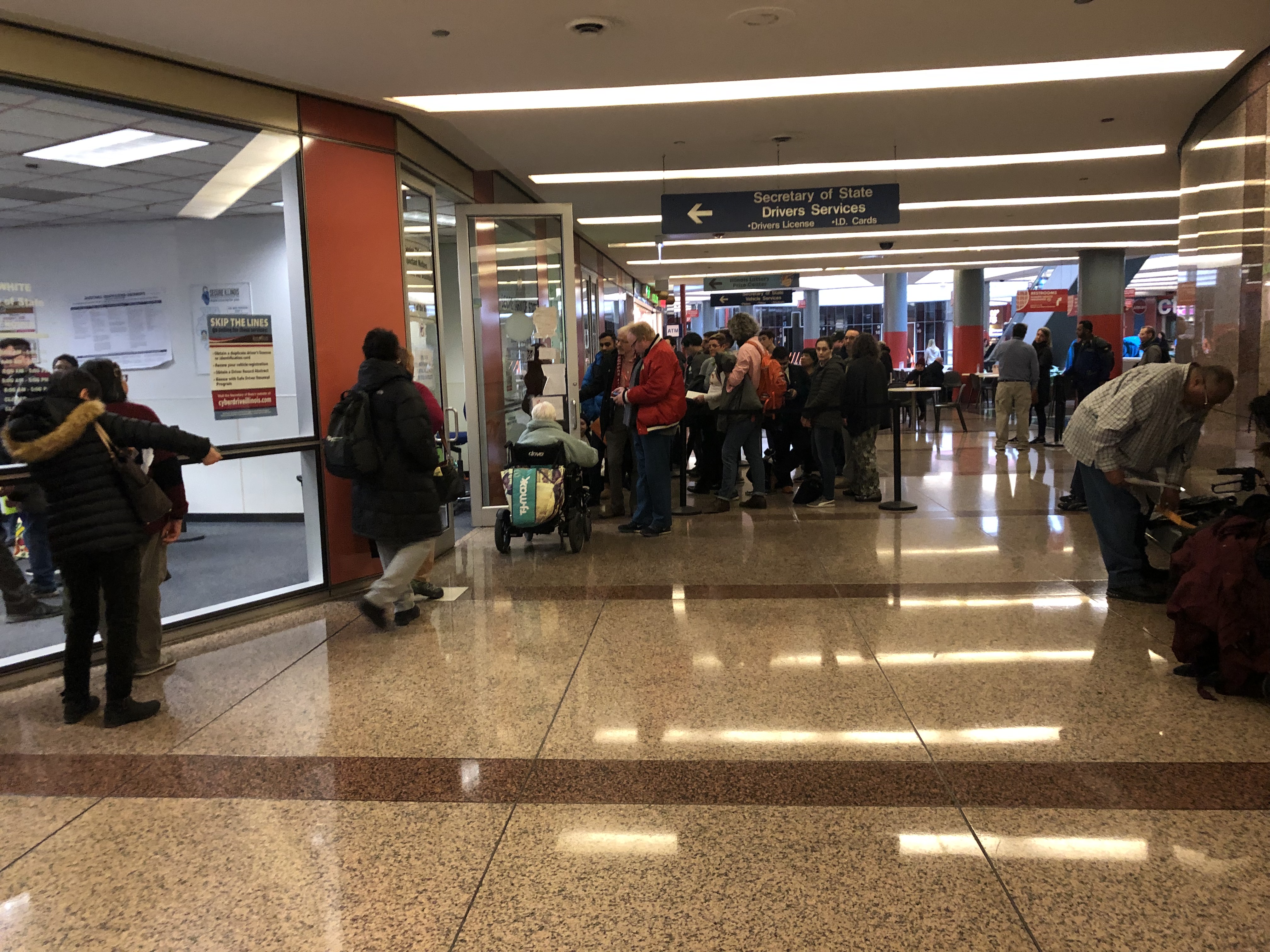 A short time later that same guard warns everyone, "This is not the lottery line." Lottery winners can cash in nearby but NOT in this line. So before you wait in the long line make sure you are in the correct place. Some tasks (not getting a Real ID though) can also be performed by waiting in a different line or going to an Express Location for the Secretary of State. In the Loop, there's an Express location at 69 W. Washington, just a couple blocks from the Thompson Center and accessible through the heated Pedway. But you CANNOT get a Real ID at an Express location, so don't waste your time trying.

10:22 a.m. I've moved up approximately five feet. Very frustrating at this point. Staff makes announcements at the front of the line about not blocking doors or the aisle, but no explanation of the slowness at this point. I notice a blue creature lurking in the nearby garden. Google tells me it's part of "Massimals in the Loop," an art display bringing color to the Pedway. It's a welcome diversion, for a few seconds at least. 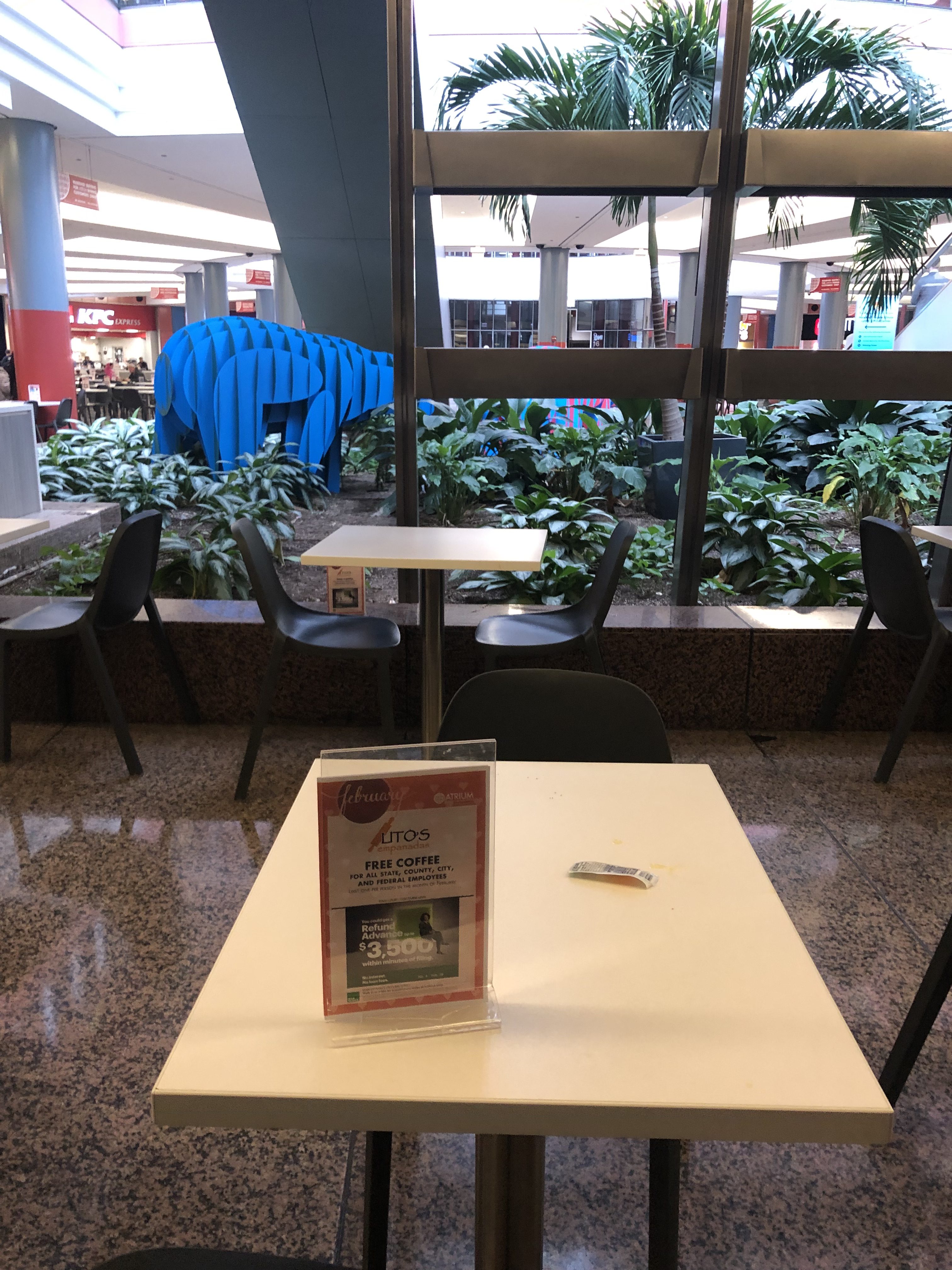 A short time later, the first announcement about the delay: the computer system went down earlier. They're back up, but going extremely slowly. That announcement also involved a reminder that many Secretary of State offices had Saturday hours for anyone who did not want to wait. Then more information about the computer outage: it involved the cameras that take pictures. Of course, no cameras mean no photos, and you can't have a driver's license without a photo. Then another announcement: encouraging anyone who needed several simple tasks (not including a Real ID) to go to the Express location at 69 W. Washington. If you're keeping score, so far three separate employees have made announcements to the long line of people: a guard in an official uniform, a guard in a uniform for an outside company and a Secretary of State worker who is not a guard. Speaking of guarding, some eagle eyed people in line notice others trying to "cut" in line. They quickly direct the offending "cutters" to the end of the line. "Oh my gosh, you're kidding," one exclaimed in disbelief about the long line before leaving altogether.

10:50 a.m. Progress! I've moved from the back half of the line to the head of the snake. Standing between a black rope and the window of the Secretary of State's office, I can feel the progress. Still outside, an hour into my saga, but closer. 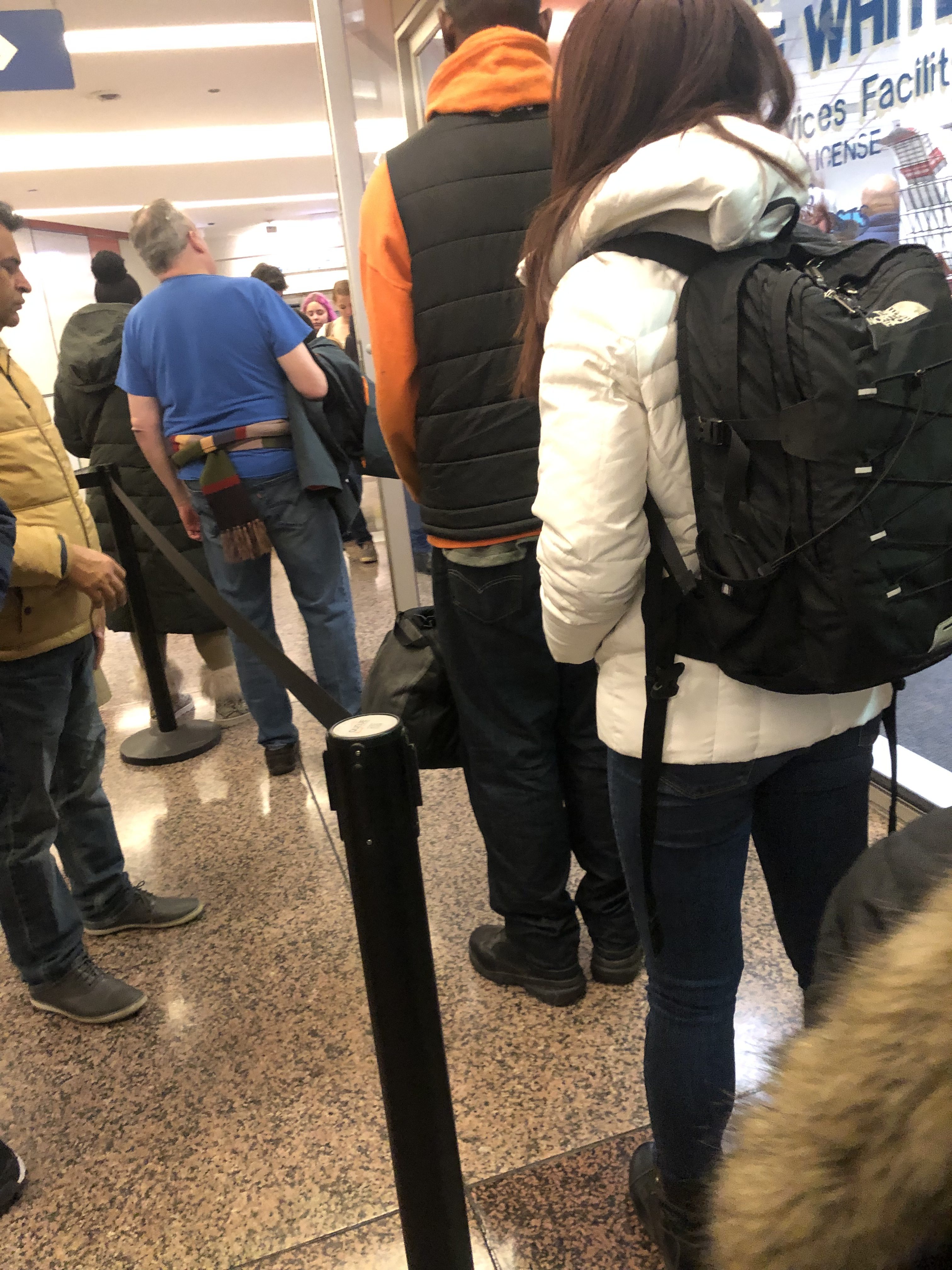 11:15 a.m. I finally cross the threshold, officially inside the Secretary of State's office. It took 76 minutes to get inside. The employees are friendly and candid, urging everyone to "Please be patient…. Systems are down and really slow. The camera system is very very extremely slow."
11:22 a.m. I feel like I've won the lottery! After a worker checks my documents, he hands me a ticket. I'm now X616. 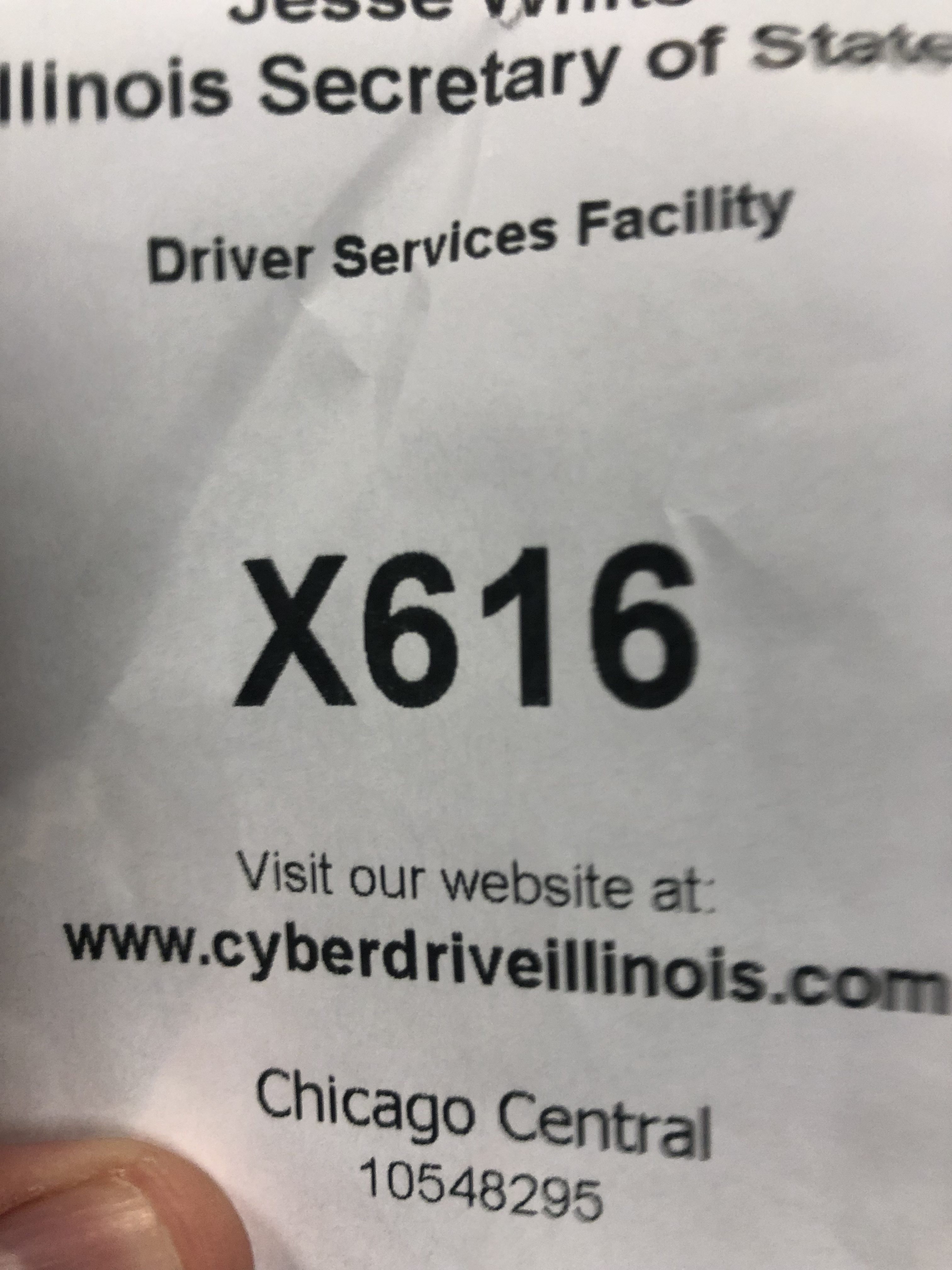 11:26 a.m. I'm sent back outside in the hall to wait in the camera line. Then quickly I'm ushered back inside to the office portion of the camera line. While waiting another employee acknowledges, "This is horrible," adding this statewide outage of the camera system had never happened before. 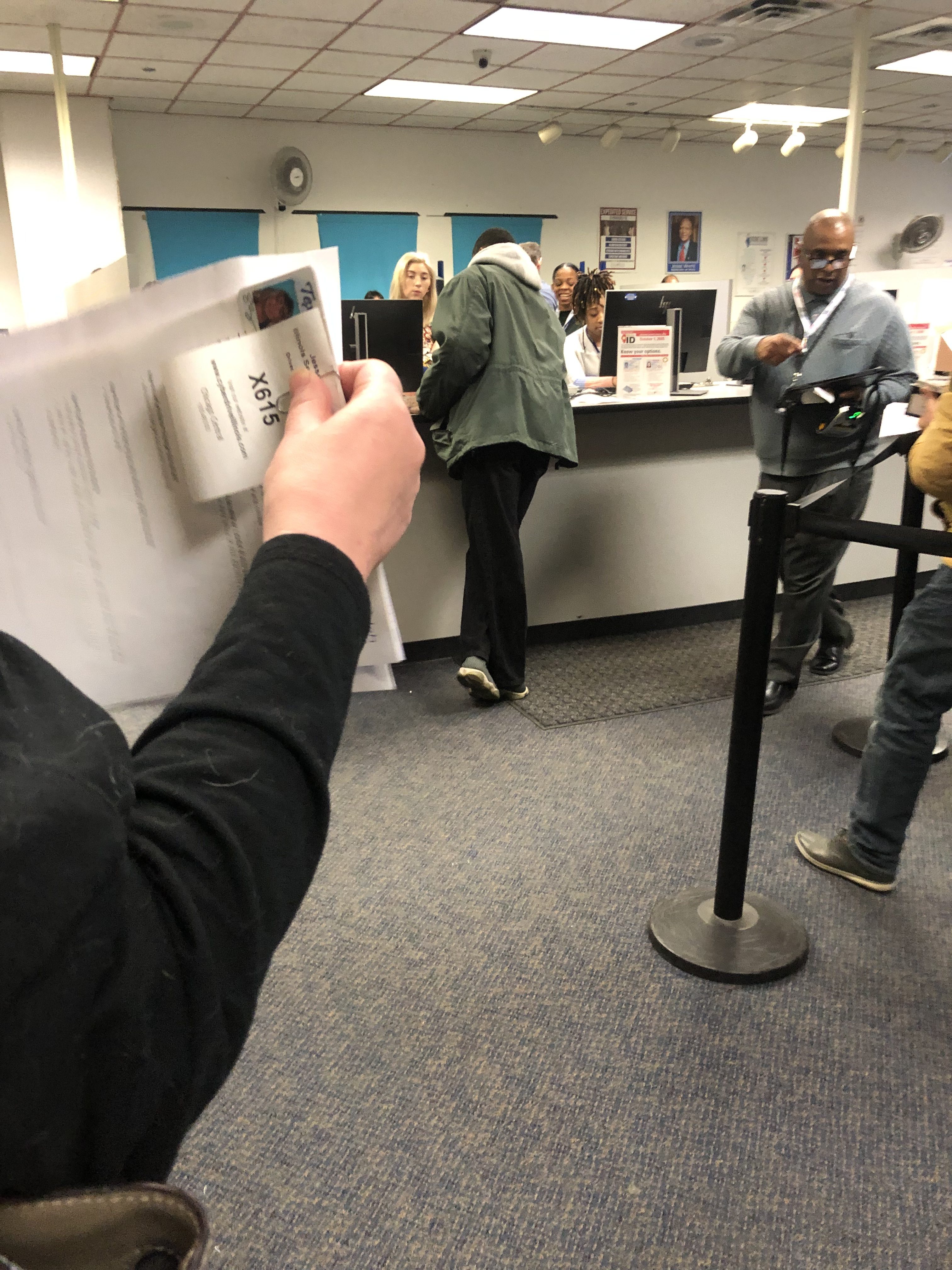 11:36 a.m. Picture time. I try to smile, but who has a good driver's license photo anyway? Then I hear another employee exclaim, "We're picking up now!" 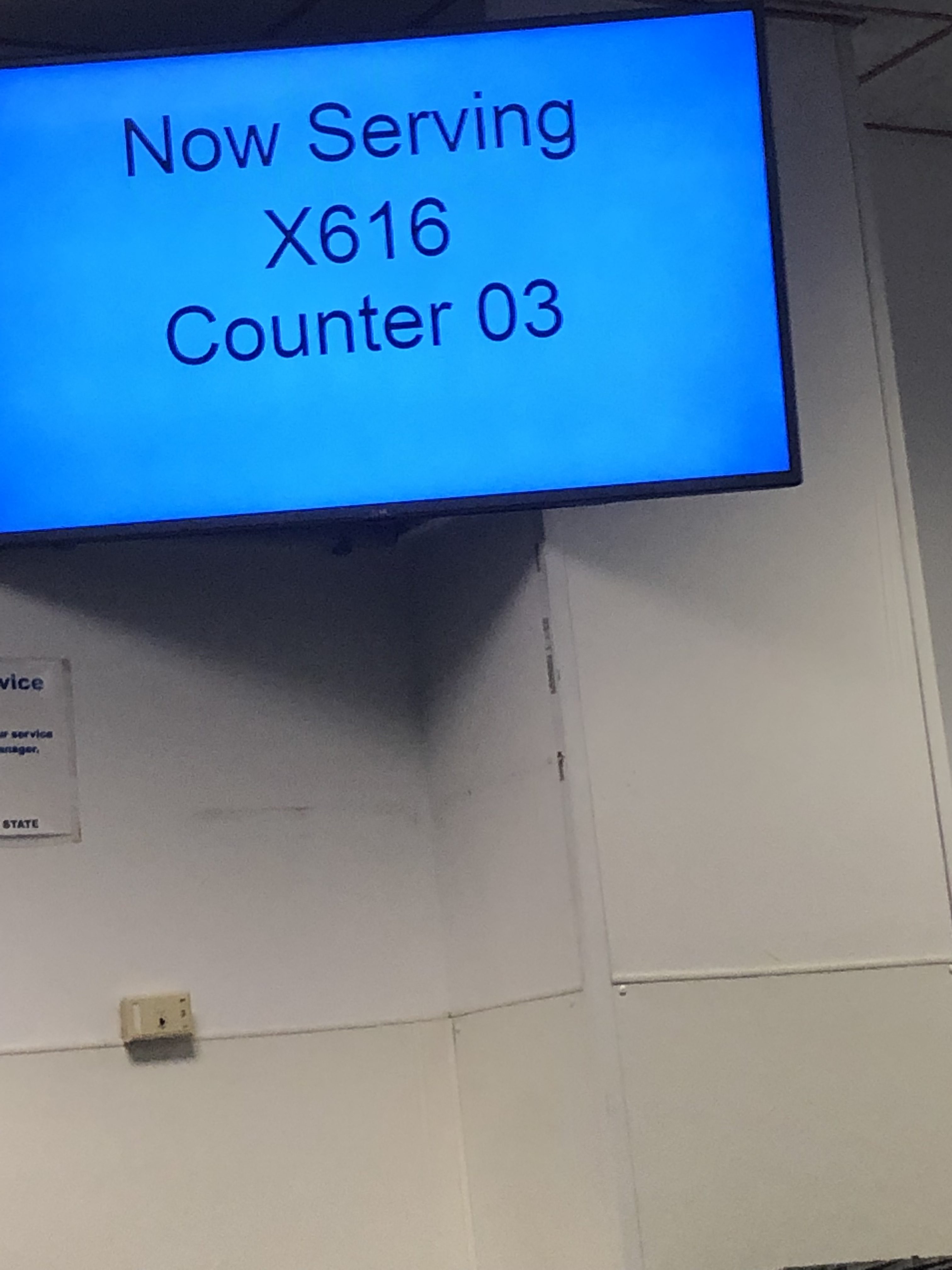 11:43 a.m. After checking and processing my documents, the friendly worker at Counter 3 scans my documents. While waiting, I notice all 16 of the counters are open, so you do have to give the Secretary of State's office credit for trying to handle as many IDs as possible. 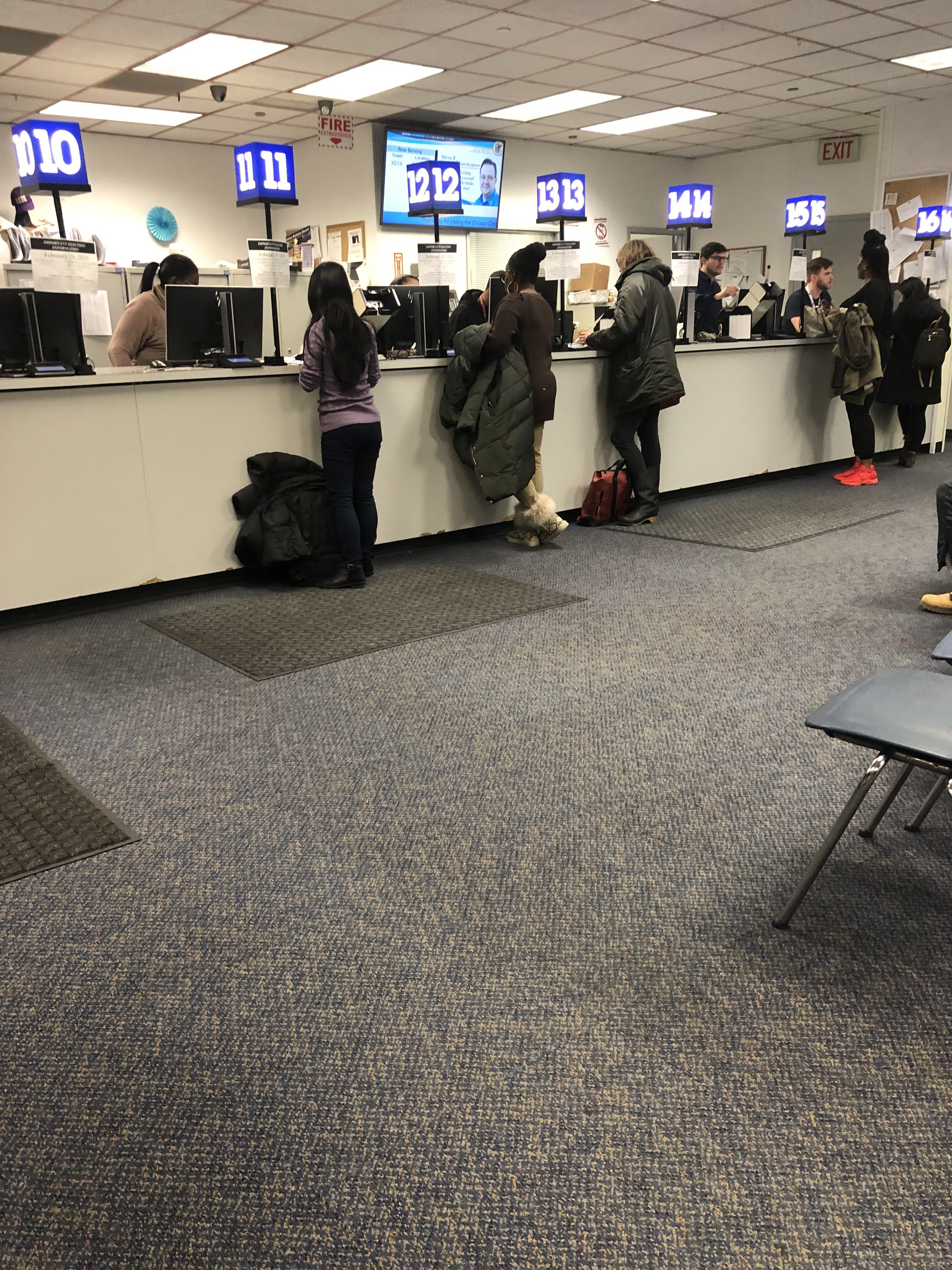 11:44 a.m. I'm in line for the cashier to pay my $5 fee to get a replacement license. Looks like the state needs to get some help from Vanna White or something: the D is missing on the "PLEASE WAIT TO BE CALLE[D]" sign leading up to the cashier. 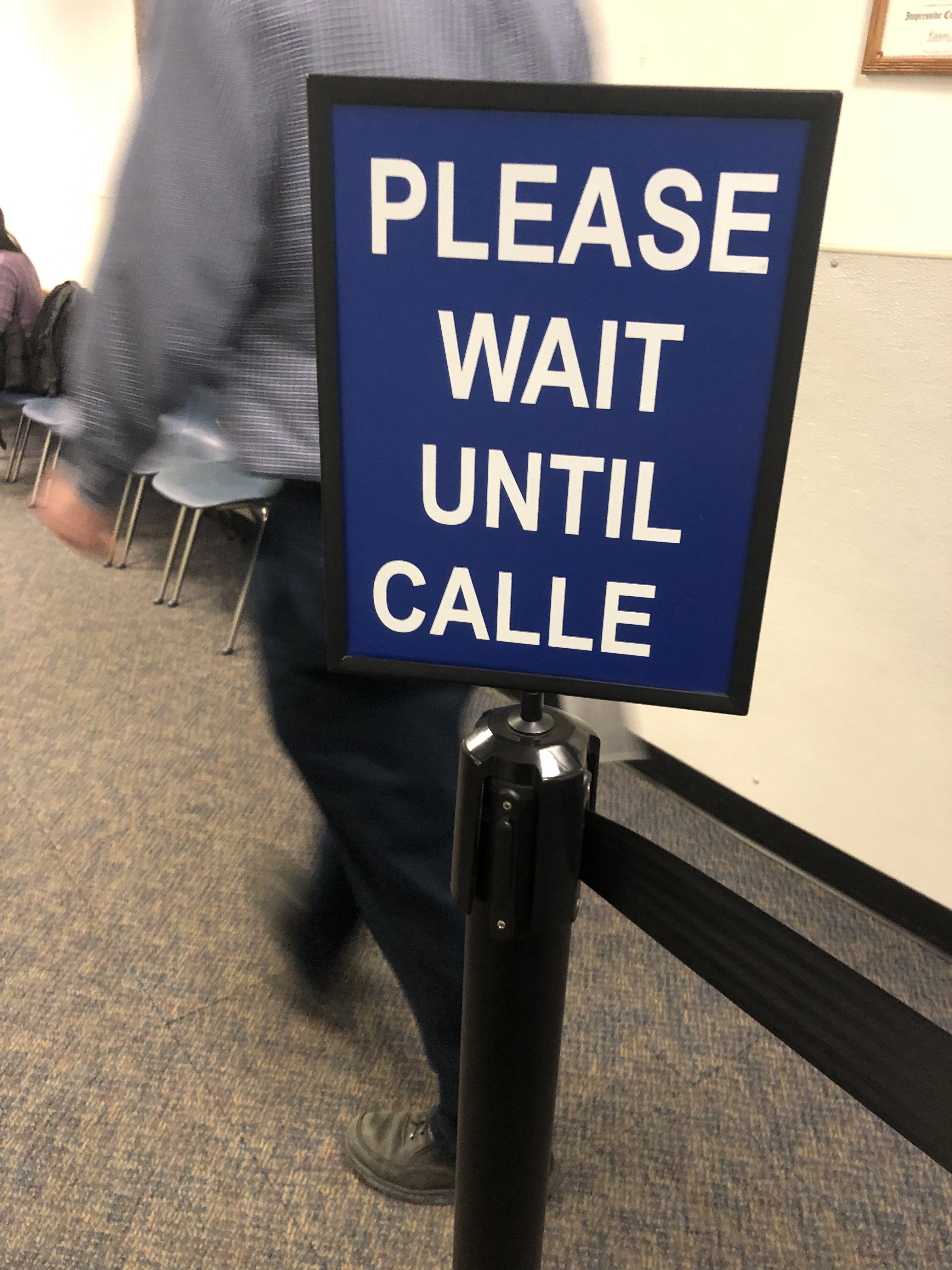 All in all, I was expecting this process to take 1 or 2 hours, so given the technical glitch, I guess it wasn't as bad as it could have been. Make sure you're patient if you plan to get a Real ID, glitch or no glitch.

Just a reminder: You don't have to get a Real ID to fly, even post-October. One option is to carry your Passport Book. However, many people don't want to do that because they are big and bulky and don't fit in a wallet.

You can also sign up for Global Entry. For $100, you get pre-screened by U.S. Customs and Border Protection. Once you are approved and interviewed and make the cut, you will receive an ID sized card that can be used to get past security at airports. The card is good for five years, comes with TSA Pre-check so you can keep your shoes on at security. And it allows you to pass customs quicker upon arrival back in the U.S. from overseas.

There's a hitch with this option though, that I know from personal experience. You pay the $100 fee and get pre-approved. Then it comes time to schedule an interview. There were literally none available, either at the downtown Chicago location nor O'Hare Airport. I checked several times over several days. When you try to call the local office for guidance, you get voicemail. It's full, so no option to leave a message nor talk to a real human being. When you call the national phone number and select the option for Global Entry, you are either disconnected immediately, or put on hold before eventually being told they're too busy to talk to you now and advising you to call back. I've tried several times with no luck.

UPDATE: I just checked one more time now in advance of writing this story. Magically, now there are some slots available, so I snagged one. But be forewarned that you may need to check back multiple times to grab one.

A final option is to get a Passport Card. It's the size of a traditional ID, so it does fit in a wallet. The cost is $30, if you already have a Passport Book. The Passport Card will allow you to get past security at airports for DOMESTIC flights, but it will not work for INTERNATIONAL FLIGHTS. (The card can be used for land and sea crossings from Canada, Mexico, the Caribbean and Bermuda). I have no personal experience with getting a Passport Card, but a CBS 2 colleague tells me the process was quick and painless at her local Post Office.