CHICAGO (CBS)-- A dramatic cell phone video captured a toddler who floated away from shore in a yellow inflatable duck near a beach in Michigan City, Indiana.

A husband and wife recounted the scary event with CBS 2 in a phone interview and said everything happened so quickly.

They were out on their boat Monday when they saw several people waving at them to help the boy. 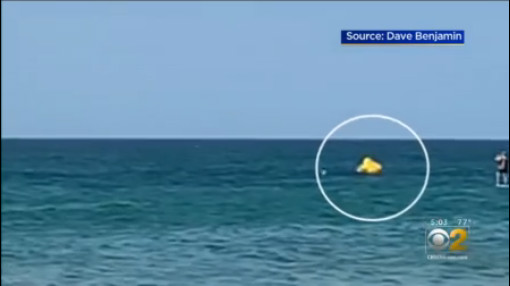 A fun day at the beach turned into a close call for a boy sitting on this inflatable duck. He drifted farther and faster in the off shore wind.

Benjamin was with his family when he noticed the woman and her two boys on the inflatable duck.

He said one child fell out and the woman was able to grab him, but when she turned back to grab the duck it was gone.

"She tried running after it and swimming after it, but it kept getting further and further away," Benjamin said. "At one point, it was at her finger tips but then now it's a foot away and two feet away."

Benjamin said he started yelling and waving to get the attention of people on this boat.

He then ran to the lifeguard tower to let them know about the emergency then got back into the water.

Benjamin can be seen in the video paddling to get to the boy, who had his water wings.

"As I'm paddling out there, I  can see that the child is pretty terrified," Benjamin said. "He was crying, hanging out to this duck's head."

The video showed the boat getting closer to the boy, but the inflatable moved like a balloon in the wind. The boy eventually fell into the water.

"Luckily, those floaties stayed on but he was bobbing at the surface," Benjamin said.

Video captured a woman on the boat jumping into the water. She was able to grab the boy and hand him off to her husband, who told CBS 2 the boy appeared to be okay.

The boy had on water wings but the Coast Guard said that is not enough.

Officials said its always best to wear a life jacket approved by the Coast Guard and be prepared for the weather and wind.