CHICAGO (CBS)-- Retired veteran William Richerson said he is lucky to be alive after an SUV crashed into his living room.

A vehicle crashed into a building in the Belmont Central neighborhood on Tuesday just before 11:30 a.m., according to Chicago police. 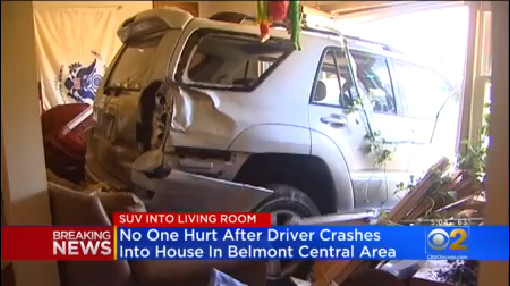 Richerson said he usually sits on his brown leather sofa, but he was taking a midday nap in his bedroom when a driver backed into the front of the house.

"I heard this gigantic crash, I got up, went to the living room, there was smoke, dust debris and stuff," he said. "I'm like Jesus, this is ain't the garage."

Police said the incident happened in the 3200 block of north Mobile Avenue.

Fire officials arrived on scene and got the woman out of the car.

Officials said no one was hurt.

Building inspectors are now checking to see if the house is structurally sound.