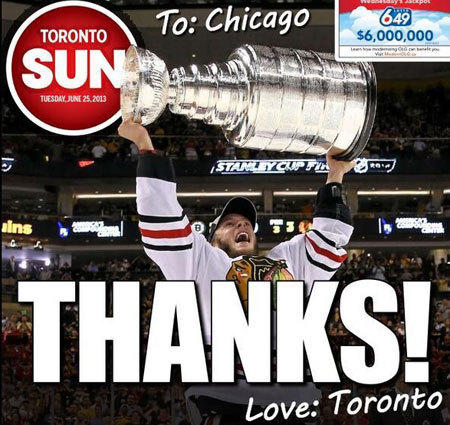 The Blackhawks' stunning, come-from-behind victory over the Bruins in Game 6 is eerily reminiscent to the comeback win the Bruins orchestrated over the Toronto Maple Leafs in Game 7 of this year's Eastern Conference Semifinals.

And for that, the city of Toronto is thanking Chicago.

If you remember, the Maple Leafs held a 4-1 lead over the Bruins with one period standing between them and the Eastern Conference Finals. But the Bruins mounted an unbelievable comeback, scoring two goals in the final two minutes of regulation before winning in overtime.

After the Blackhawks took down the Bruins, the Toronto Sun's cover read "To: Chicago. THANKS! Love: Toronto,"  with a picture of Jonathan Toews hoisting the Stanley Cup.

There is another Chicago connection to this story: The Sun's editor, Michael Cooke, did a stint in Chicago as editor of the Chicago Sun-Times before heading to Toronto in 2009.