CHICAGO (CBS)— The grieving family of Thana Muhammad, an 81-year-old woman found dead in her Rosemoor home in June, is still seeking answers about her gruesome murder.

Muhammad was the sister of former Ald. Michael Chandler. Another brother is a Chicago police lieutenant. 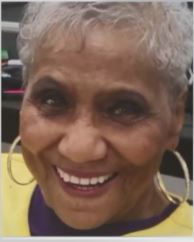 But those powerful connections didn't prevent someone from killing and dismembering her last summer.

Six months after her murder, her killer still hasn't been caught.

Muhammad's family is now turning to social media to help catch the person who killed her shortly after she moved into a new home at 100th and Forest Avenue.

Her decomposed body was found inside the house and her silver 2012 Honda Accord was later discovered on Chicago's West Side, near Polk and Division.

Police said she had previously lived in that area.

A sign urging action to find her killer hangs on the fence in front of the home where Muhammad was killed.

They hope it will raise awareness about her unsolved murder.

The family thanked police for their hard work but said something more needs to be done. They have increased the reward for information from $20,000 to $30,000.