(CBS) -- Creepy clowns are popping up all over the country and locally, from Oswego to Hobart, Ind. But it's not just a scare, it's a security threat that's caused at least one Illinois college to cancel evening classes, CBS 2's Suzanne Le Mignot reports.

"I'm startled because I didn't know what was going on and that's very scary, everything that's going on with the clowns and stuff," Tonya Jones, a parent, said. 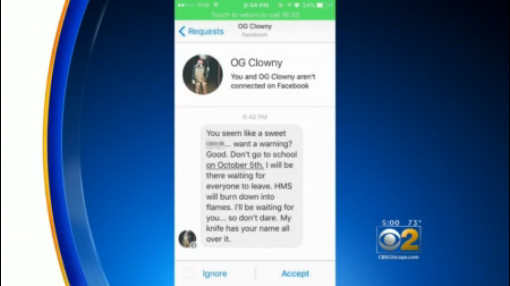 Parents are concerned following a Facebook threat by a person called, OG Clowny. The person posted on a student's page, "You seem like a sweet (expletive)...want a warning? Good. Don't go to school on October 5th. I will be there waiting for everyone to leave. HMS (meaning Hobart Middle School) will burn down into flames. I'll be waiting for you...so don't dare. My knife has your name all over it."

"We take all situations like this seriously. If there's any threats made to any of our students in the Hobart school system we follow up to the fullest," Hobart Police Lt. James Gonzales tells CBS 2 Chicago.

A similar threat was made to nearby Portage High School, by poster Izzy Wood Jr, bearing a sinister 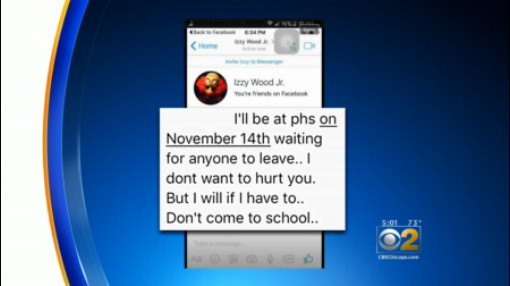 clown face. On the homepage it says, "I'm coming for all you (expletives) in Portage."

"I think they're looking for a reaction," Portage, Ind. Police Chief Troy Williams said. "They've kind of got one by us talking about it. I don't think parents should be overly concerned. We're going to be on top of this thing."

Portage schools say they will remain open on the two threat days, but with extra security patrols throughout the area.

"We've asked the patrol division to conduct extra patrols at all our schools in our city," Williams added. 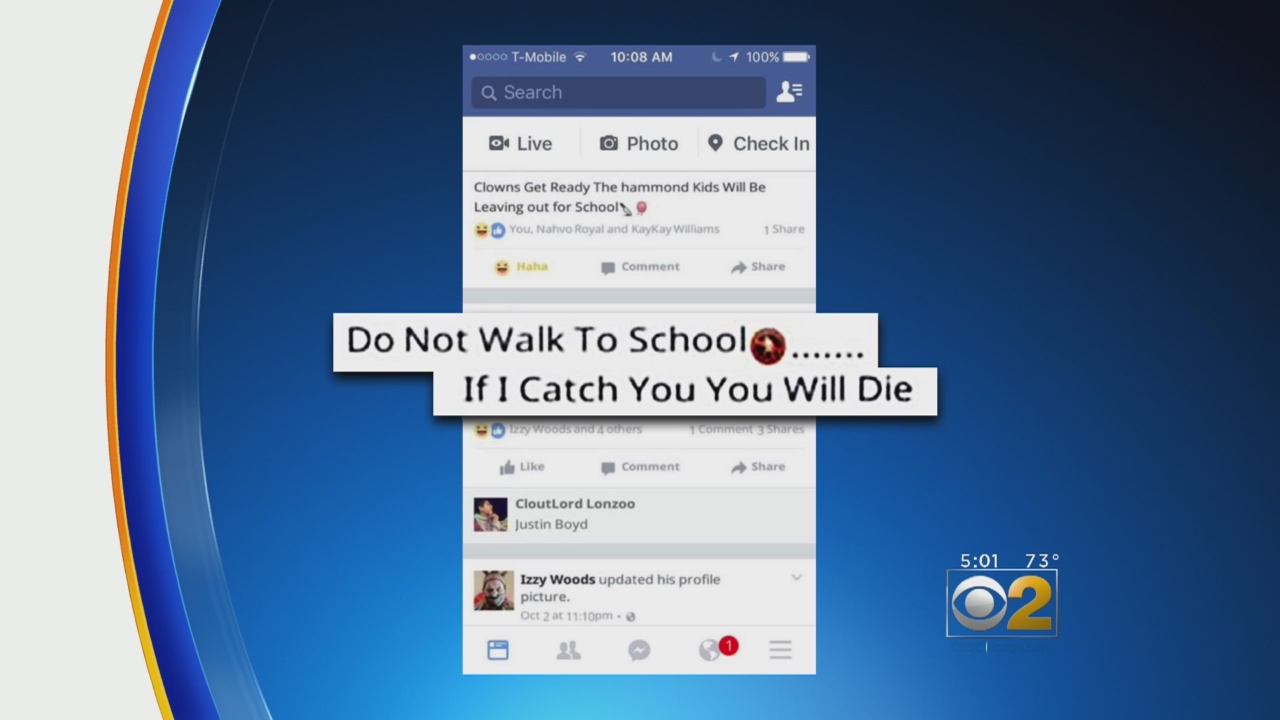 Sidney Patterson said the threats made by so-called "creepy clowns" on social media have been felt in the hallways at Oak Park and River Forest High School.

"It's not something that should be taken lightly," Patterson.

Officials at OPRF notified parents of the threats via email, robocalls, and letters; informing them multiple students had been threatened by unknown subjects using clown photos as their profile pictures.

"I'm just concerned about the kids, but am very happy the officials and police are on top of it," OPRF parent Mia Delaney said.

Many students think it's likely kids clowning around.

"Don't accept friend requests from people you don't know who are dressed like clowns," she said.

Hammond, Ind.-area schools received threats, too, with a posting from Izzy Woods saying, "Do Not Walk To School. If I Catch You You Will Die."

Hammond, Portage and Hobart Police are all investigating.

Police placed the school on a brief lock-down after the incident happened, as they searched for suspects.

And on the campus of the University of Illinois at Chicago, one student was detained and later let go after dressing as a clown for a class performance, CBS 2's Charlie De Mar reports.