There's a song in Axiom Verge that resembles the shrill voice of your way-too-old dad's way-too-young third wife screaming in reverse. And while it's terrifying, it also makes you want to tap your foot to the wicked club beat.

But here's the thing, that old trope of the middle-age guy dating the young, vapid girl... That's dumb. And it's not actually present here. As it turns out, your stepmom is actually quite nice, and your dad's happy, and you're not an irrationally angry teenager anymore, so live and let live, ya know?

What am I trying to say? Axiom Verge seems like an old trope, but mutates into anything but as the game progresses.

At first, Axiom Verge plays like a solid Metroidvania -- action-adventure games that resemble Metroid, Castlevania and more recently, games like Guacamelee. You're just a dude with rad muttonchops stuck in an alternate dimension fighting weird aliens and the only way to progress is to obtain upgrades -- around here, we call that "Thursday night" (actually, Thursday is ladies' night, disregard that). Can't quite make the jump to a certain ledge? Make a note of it and come back later once you've obtained the grappling hook (or one of the many other items that could assist here).

The upgrades you need to move forward in Axiom Verge are far more versatile than other games of its ilk. You find yourself not only progressing, but breaking and manipulating the world around you. It's as if you're smashing the games of your youth to reassemble them into something cooler.

Take the "address disruptor," for example, a beam you can use to transform or "glitch" the things around you. Initially, you use it to help clear rows of blocks impeding your progress. You soon find it can affect enemies too! And not all in the same way. It might completely neuter one type of enemy, while merely changing the speed of attack for another. Other enemies might turn into bombs, and some might transform into weapons that damage the world around you.

Basically, unlocking upgrades doesn't merely allow you to progress in Axiom Verge, it's constantly changing the very way you play it.

Other aspects of the game start out familiar, but slowly transform, too. At the beginning, the game looks like something on the SNES, but goes on to create subtle visuals as you move forward that could never have been done on a '90s console (also, its design can be downright beautiful at times). The controls have a clunky feel to them when you start the game, lacking grace in the same challenging ways of 20-year-old games, but small aspects of the controls and upgrades do a good job modernizing it while maintaining that old-school feel. 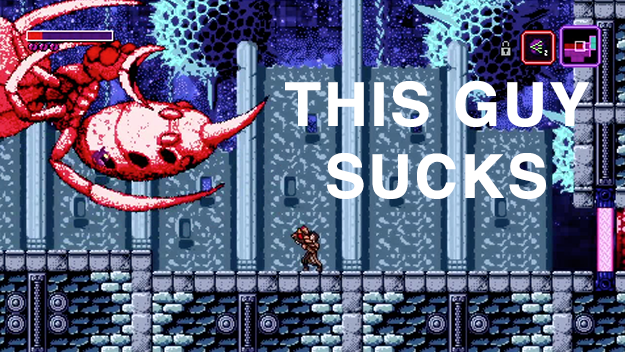 Anyway, let's talk about me for a second. Once, I realized I was dating someone who happened to look like my ex.

This created a moral quandary... Why am I even here? Holding this hand? Of this doppelganger?

This has no bearing on Axiom Verge. Sorry.

One of the downsides of non-linear games is the fear that you'll eventually find yourself more aimless than your 42-year-old uncle who still lives at home. What if you obtain a new item, but have no clue where to use it or where to go next?

Axiom Verge actually handles this pretty well in a few ways. As long as you're not an idiot.

Having put the game down for a few weeks, I came back to find I had no clue where to go next. I spent over three hours running around before finally realizing I'd passed the door I needed to go through multiple times. Whoops!

But this shouldn't happen to you. Axiom Verge has a detailed map, and looking at it closely should give you a good idea of what places you've yet to explore and where you'll want to explore next. The game also allows you to make notes on the map. Can't get past an impediment? Make a note to help you remember where it is when you find an item that'll let you pass it later.

Boss fights gave me a decent amount of trouble, especially at the beginning.

Fighting bosses, I kept lapsing into the same pattern. During each boss fight, I'd become impatient with the fact that the boss wasn't dying. The older I get, the more anxious I get about how I use my time. I work a bajillion hours a week. I like to spend time with my girlfriend. I like to spend time with my friends. I have to eat food THREE times a day. What a waste!

Approach bosses in Axiom Verge with an abundance of patience, and you'll save time, I promise.

Still, with all of the ways it's advanced its genre, Axiom Verge definitely isn't for everyone. I wouldn't blame someone if the non-linear path and open map caused them to quit the game. Nor would I begrudge an individual who feels the bosses are challenging in a way that's frustrating.

Axiom Verge might not be up your alley, and that's totally fine.

The retro game-lovers out there can't miss Axiom Verge though, its awesome speedrun mode is enough to prove that Tom Happ, the sole developer of Axiom Verge, knows what audience he's catering to.

But! I don't think Axiom Verge is solely for a niche audience either. Even if you've never played a Metroid game and don't know who Alucard is, there's a strong possibility you might find Axiom Verge appealing.

So give this beautiful game a try.

I played Axiom Verge on Playstation 4. It's also out on PC, OSX and Linux. There have been consistent rumors it will eventually come out on Wii U. Read more of CBS Chicago's video game reviews here.