Illinois is now one of 11 U.S. states in which recreational use of marijuana is legal – following a successful push that served as a major element of Gov. J.B. Pritzker campaign's campaign for office in 2018.

The Rules Regarding Recreational Marijuana In Illinois

Large crowds gathered overnight to wait in line at a cannabis dispensary in Lakeview. CBS 2 also covered lines forming at a dispensary in The Loop. 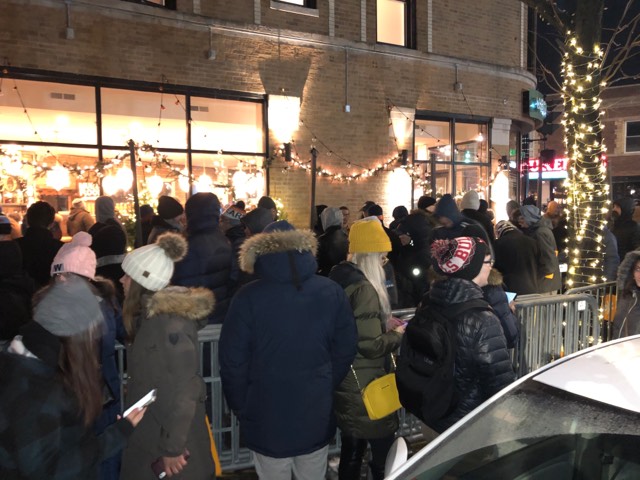 Medical use of marijuana was legalized beginning six years ago on Jan. 1, 2014, after then-Gov. Pat Quinn signed a bill authorizing it into law the previous August.

The law allows registered patients to obtain up to 2.5 ounces of medical marijuana every two weeks from a dispensary the patient specifies during the application process.

Quinn lost his bid for reelection to Bruce Rauner in 2014. Rauner repeatedly rejected recommendations form an expert advisory board to expand the number of conditions that would qualify for a medical marijuana prescription – only to pull an about-face in 2016.

Meanwhile, state lawmakers also passed a bill that would have removed criminal penalties for possession of up to 15 grams marijuana in 2015, but Rauner vetoed the bill. But the following year, Rauner approved a bill that decriminalized 10 grams or less with marijuana – changing the offense to a civil infraction punishable by a fine of up to $200.

In 2017, state Rep. Kelly Cassidy (D-Chicago) and Sen. Heather Steans (D-Chicago) proposed legislation to legalize and regulate cannabis. They estimated that legalization could generate up to $700 million for the state every year. Travel expert and marijuana advocate Rick Steves was among those who spoke out in favor of the proposal.

"What we need to do is take that black market down and turn it into a highly regulated, highly taxed legal market so that we can gain credibility and focus on the real risk to young people in our society which is hard drug abuse," Steves told CBS 2 in 2017.

Steans and Cassidy's proposal would have allowed individuals to possess up to 28 grams or grow five plants for adult use.

In March 2018, a nonbinding referendum was placed on the Illinois primary ballot asking if Illinois should legalize "the cultivation, manufacture, distribution, testing, and sale of marijuana and marijuana products for recreational use by adults 21 and older."

Nearly two thirds of voters backed the referendum. But Rauner came out against legal recreational marijuana, calling it a "mistake."

Pritzker defeated Rauner in the 2018 gubernatorial Race, and said he hoped to legalize cannabis soon after taking office.

"I'm pleased that Senator Heather Steans and Representative Kelly Cassidy have put forward their concept for a bill. They have a bill that they introduced last year and they're working on it this year to make sure it's the right kind of program, regulatory system, that works for everybody in the state," Pritzker said in March 2019. "I'm going to make sure all the voices are heard, in particular, black and brown communities who have been put upon by the war on drugs over so many years."

In May 2019, the Illinois state Senate passed a recreational marijuana bill. The bill allowed Illinois residents 21 and older to legally buy and possess marijuana -- 30 grams of cannabis flower, five grams of cannabis concentrate such as oil cartridges and muscle creams, or 500 milligrams of edibles such as brownies or gummies. Thirty grams of pot in leaf form is typically enough for 30 to 50 joints.

Counties can add up to 3.75% for unincorporated areas and municipalities can add special taxes up to 3%.

The bill that was approved did not allow consumers to grow marijuana plants. Adults were required to buy the cannabis in licensed stores.

According to the bill, cannabis products could not be transported over state lines, and tax revenue was to cover needs and costs related to expungement or the clearing of marijuana related records before it was broken out. Additionally, local towns were permitted to decide individually how cannabis-related businesses may fit into their communities and employers were still allowed to maintain zero tolerance workplaces. Landlords and business owners were permitted to have zero tolerance policies as well.

The bill went on to win the approval of the state House on May 31, and Pritzker's signature on June 25.

Since May, existing marijuana dispensaries have been preparing to begin selling adult-use cannabis this New Year's Day, and in some cases opening special locations. Meanwhile, some municipalities have opted not to allow pot businesses at all, while others – including Chicago – set up specific restrictions.

In Chicago, the mayor and City Council have prohibited marijuana sales in most of the downtown area, and divided the rest of the city into seven zones, with a maximum number of stores selling recreational marijuana in each.

Chicago's marijuana zoning rules also require anyone seeking to operate a marijuana business in areas of the city typically reserved for storefronts to obtain a city permit and a zoning change, which would require City Council approval and give aldermen more oversight of recreational pot shops.

Expungement Of Past Convictions
The recreational marijuana law also called for hundreds of past marijuana convictions to be expunged. But how and when that will happen isn't as simple as it sounds.

Prosecutors will automate the expungement process for the lowest-level marijuana convictions, but people convicted of more serious cases will have to individually petition to have their cases cleared.

Cases of marijuana possession of less than 30 grams qualify for automatic expungement as long as they are not associated with violent crimes. But doing so will require police and prosecutors to review databases for eligible cases, which will take time. An "automatic" expungement doesn't have to be approved until January 2021 if it dates as far back as 2013.

Concerns And Controversies
In the run-up to the legalization of recreational marijuana over the past couple of months, concerns mounted among medical marijuana users about a lower supply and rising prices.

The Cannabis Association of Illinois, a trade group, said in November that over the year prior, it had become easier to qualify for medicinal marijuana, and the list of accepted medical conditions has grown. It's raised the pool of marijuana patients from roughly 20,000 to more than 80,000.

Cannabis patient advocate Kalee Hooghkirk told CBS 2's Vince Gerasole in late November that she was not satisfied with that explanation, saying, "These cultivators knew these conditions would be expanded within 2019."

State law requires dispensaries have maintained a 30-day supply of marijuana for medical use first as recreational use comes on line. Some patients wondered if dispensaries could be hording supplies to prepare for increased demand.

To guard against that, the state enacted new standards in November, saying dispensaries could only put out for recreational sale marijuana that was purchased after Dec. 1, 2019.

Still, this past Monday, there was a big rush of medical marijuana users to stock up ahead of legalization.

Meanwhile, controversies erupted over restrictions on who could use recreational marijuana based on where they lived, and who would really stand to benefit financially from legal marijuana.

Because marijuana remains illegal under federal law, its use is not permitted in public housing – and could cause public housing tenants to lose their living arrangements.

In the summer, the Chicago Housing Authority informed residents of the discrepancy between federal and state marijuana laws. It stopped well short of spot inspections and mandatory drug testing.

But other jurisdictions did not. One woman who lives in a federally-subsidized apartment in Wilmington said she had received a letter that said landlords had the "right to inspect" units for "illegal drugs" without notice, and could require the testing for illegal drugs for all residents if "deemed necessary."

Also of concern was whether all Chicagoans would have an equal opportunity to participate in the legal marijuana business – particularly communities of color.

One effort to help level the playing field was the state's Social Equity program. It aims to help minority entrepreneurs in communities that have struggled with drugs and blight earn one of the 75 cannabis business licenses to be awarded in 2020.

The state will name the winners of those 75 additional licenses in May.

But some entrepreneurs said the state was not coming through on its promise with the Social Equity program. And many Chicagoans took issue with the fact that the 11 existing medical marijuana companies in Chicago that were to be allowed to immediately begin recreational sales on Jan. 1 are owned almost exclusively by white men.

In October, the City Council Black Caucus proposed delaying legal weed sales in the city for six months because of the latter complaint.

"It's very critical that our communities have the parity and equity that is necessary for everybody to participate. This program started off, in our opinion, on the wrong foot, and we're trying to correct that. We're hopeful that the state will make some actions that make this equitable to all communities in our state. Not just one select group of individuals," Ald. Jason Ervin (28th), chairman of the Black Caucus, said in December.

But Mayor Lori Lightfoot said delaying legal weed sales will have several unintended consequences, such as shortchanging a "seed money" program for new marijuana businesses that would be funded from taxes on existing firms, fueling an illegal black market in Chicago, and pushing back the start of recreational pot sales until a time when police will be preparing for a traditional summer spike in violence.

Lightfoot also said Gov. Pritzker had already taken steps to increase minority participation in the pot industry, and had pledged to do more.

The proposal to delay sales was approved by the Committee on Contracting Equity and Oversight by a vote of 10-9.

But the full City Council rejected the proposal by a vote of 29-19 following a heated debate. The Black Caucus itself also split over the vote, with six of its members – at Dowell (3rd), Michelle Harris (8th), Walter Burnett (27th), Chris Taliaferro (29th), Emma Mitts (37th), and Matthew Martin (47th) – voting against the delay.

Ald. David Moore (17th) – who voted for the delay – was so incensed by the fact the Black Caucus did not stand united in favor of the ordinance, he said he was resigning from the Black Caucus.

There were other efforts that sought to bring about social equity for the legal marijuana business – including one by a Los Angeles-based company that sought to help entrepreneurs who were getting left out due to the high cost.

The company 4thMVMT ("fourth movement"), is helping 30 hopefuls here in Chicago. The business will drop up to $2 million per applicant to help them get their foot within the cannabis door, under Illinois' social equity clause.

And in Evanston, the revenues from legal marijuana will go toward a broader social effort – namely a reparations fund.

In November, the Evanston City Council approved a measure to direct the first $10 million in tax revenue from recreational marijuana sales to a reparations fund. The goal is to address the north suburban city's decline in African-American residents and help African-Americans thrive in Evanston, among other issues.

Evanston Ald. Robin Rue Simmons (5th) pointed to Evanston's history of redlining, where neighborhoods were divided based on race and economics. The alderman believes the impact is still felt today.

The hope is that by allocating $10 million of marijuana tax revenue into the reparations fund, it will encourage minority business startups and help longtime residents like Walker – ultimately eliminating the wage disparity.