CHICAGO (CBS) -- Charges against "Empire" actor Jussie Smollett were dropped for 16 hours of community service and an agreement to forfeit his $10,000 bond.

According to the Rainbow PUSH Coalition, Smollett completed those community service hours with the organization over two days.

"And hopefully this chapter is closed," said Rev. Jessie Jackson Sr, founder and president of the Rainbow PUSH Coalition.

Pictures show Smollett only days ago interacting with people inside the organization.

The actor and recording artist sat in the front row with a "Hope Alive" sweatshirt, listening to a speaker.

Jackson added it's not the first time Smollett has been in touch.

"When he first was reported to be in the crisis, we reached out to him like we often do. He responded, came over that time. I sought to council him," Jackson said.

In letterhead obtained by CBS 2, Rainbow PUSH wrote, "We are proud to have received the volunteer service from Mr. Jussie Smollett on Saturday, March 23, and Monday, March 25. Mr. Smollett is one of the most impactful community service volunteers that we have ever worked with." 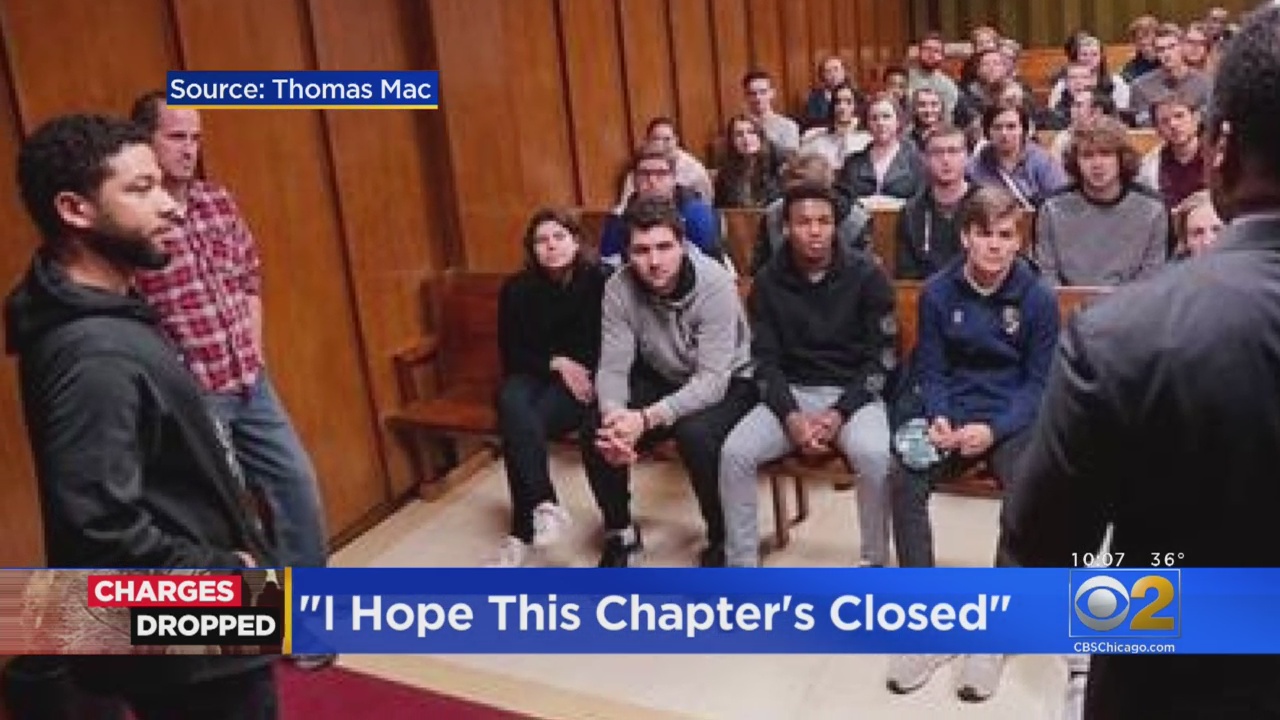 The organization also released this statement:

"The Rainbow PUSH Coalition is an international human rights/civil rights organization that is committed to advancing the human rights of all people.  When we first heard of Jussie Smollett's crisis, we reached out to him and "Empire" to see if we could be helpful. Jussie met with us and has given of himself to our organization and the movement for social justice.

We have members and supporters across the country and around the world.  Many of our members and supporters give of themselves and their time to help achieve the goals of the organization.  Jussie is a member of our organization.  He, like many other members, has given of his time and talent and continues to do so.  During this period of disruption to his life and livelihood, Jussie has spent time here helping to advance this important work. There was no court-ordered community service here.

Media questions about the rationale for dismissing the charges against Jussie are best directed to his counsel and the Office of the State's Attorney.  The prosecutors' decision to dismiss the charges are the prosecutors alone, and Jussie should not be the one to defend the decision.  He has maintained his innocence from the very beginning.

At a time when our city is wrestling with excessive violence and unsolved homicides our resources and energies should be focused there. Any further questions about Jussie Smollett's case should be directed to his lawyer.

We will continue to reach out to the challenges in our community. We will not stop until there is peace and justice for all."

That includes the organization's entity, which provides students interested in participating with the Historic Black College Tour 2019.

He spent several hours responding to students about the music and film industry and volunteered in the PUSH Freedom Store managing sales and encouraging visitors to purchase gear.

Rainbow PUSH estimates the actor was there for a total of about 16 hours over two days.

"I pray for him and am available for council," Jackson said.

Smollett was facing 16 counts. That comes to about an hour of community service time per allegation.