CHICAGO (CBS)-- Police are searching for the truck driver who hit, and seriously injured, a woman in the South Loop Tuesday night.

Authorities want the public's help in locating the hit and run driver.

According to CPD, a 61-year-old woman was sitting in a bus stop booth, in the 1100 block of South Michigan Avenue, when she was struck by a red pick-up truck around 11:45 p.m.

The woman was taken to a local hospital in serious condition with leg injuries.

A witness described the chaos.

"The lady was just sitting by herself and he spun out. He almost hit a car over here with rims that were glowing and there was a truck behind him glowing and he almost hit them," said the witness. "And he came in, rammed the lady and almost took her out."

Police said the truck driver fled the scene southbound on Michigan Avenue. Police released a photo of the red truck wanted in this hit-and-run crash and are seeking help identifying the driver. 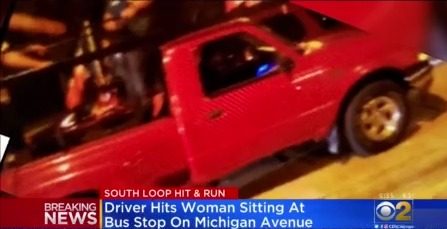 CBS 2's Marissa Parra was at the scene and said the incident took place during Chicago's Mexican Independence Parade along Michigan Avenue. Police have not confirmed whether the vehicle involved in the hit-and-run crash was also in the parade.

A witness told CBS 2 the same red truck tried to hit her, but someone pulled her out of the way.