CHICAGO (CBS)-- Burbank Police have released a video of a car that struck two people, one fatally, on June 10 and drove off.

Around 11 p.m., a 53-year-old woman and 57-year-old man were struck by a silver car with a broken taillight traveling southbound on Cicero Avenue.

The two victims were taken to local hospitals where one died. 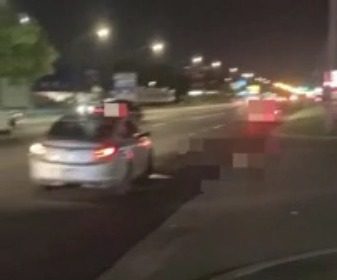 The video released by police captures the driver and passenger outside of the car and then reentering the car. The male driver is seen wearing a black shirt and dark pants, and the male passenger is wearing a red shirt and green Chicago Bulls basketball shorts.

Anyone with information regarding this incident is asked to call police at 708-924-7300.