LOMBARD, Ill. (CBS) -- Police raided a smoke shop near Lombard and arrested the owners this week, after they were found to be selling synthetic pot and bath salts.

Armed with a search warrant, police seized more than $1 million of synthetic marijuana – under the names K2, Spice and Red Magic – and bath salts, under the names Charley Sheene and Ultra – along with drug paraphernalia and $5,000 in cash.

Police arrested owner George Rantis, 49, of St. Charles, and manager Sergio Delcid, 46, of Chicago's Albany Park neighborhood. Both were charged with one drug manufacturing and delivery of over 200 grams, a Class X felony. 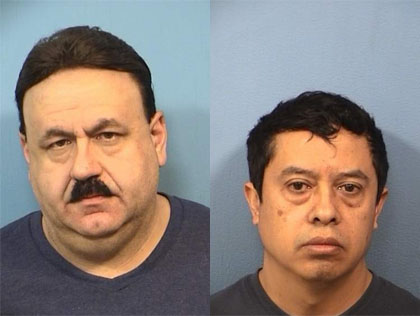 This was the first time DuPage County police executed a search warrant for such synthetic drugs.

Since New Year's, selling synthetic marijuana has been a felony in Illinois. It is typically sold as potpourri or herbal incense, and until Jan. 1 was readily available even in convenience stores and gas stations.

The statewide move to ban the substance has been dubbed "Max's Law," following a tragic crash in North Aurora.

Max Dobner, 19, bought synthetic marijuana at a west suburban mall and experienced a panic attack, with rapid heartbeat and hallucinations after using it. He drove his car at 100 miles per hour into a home in the far west suburb.

In fact, many experts have said synthetic marijuana is actually far more dangerous than real marijuana. Those who use the synthetic products can suffer seizures, hallucinations, tremors, paranoia, convulsions, high blood pressure and an elevated heart rate, according to Will County State's Attorney James Glasgow's office.

So-called bath salts have been illegal since July of last year. They often contain powerful stimulants such as mephedrone and methylenedioxypyrovalerone (MDPV), neither of which have a history of actually being used as bath products.

The Sun-Times Media Wire contributed to this report.