(CBS) As Chicago pours its heart into rooting for its beloved professional sports teams, it's become a pastime of sorts for colleges to argue over what university the city loves most.

Northwestern famously termed itself, "Chicago's Big Ten team." Illinois basketball coach John Groce has pitched the "Our state, our team" slogan that includes a recruiting focus on Chicago, while the university also used a "Paint Chicago Orange" campaign ahead of a football game against Washington at Soldier Field in 2013. More recently, alumni of little Northern Illinois mocked both Northwestern and Illinois after its big football accomplishments by taking an ad out in the Chicago Tribune that called out the Illinois by saying "Next? We're looking at you Illini" and then trolled the Wildcats with the slogan "Chicago's big time football team."

Turns out, none of those teams own Chicago. We know this because we now have research to back it up.

In another excellent interactive map produced by the New York Times, we can see that when it comes to collegiate rooting interests, Chicago is predominantly a Notre Dame town. And it's a nearly as much of a Michigan town as it is an Illinois town, with Northwestern and Northern Illinois trailing further behind.

Take a look at the screenshot below or better yet, give the page a visit. The red in the northern part of the map represents Wisconsin, and the orange represents Illinois in the south. The light gray around "Huskie Stadium" represents Northern Illinois, but the darker shades of gray toward downtown Chicago represent Notre Dame. The tan/yellow marks neighborhoods/areas where Michigan fandom reigns supreme -- along the lake front on the city's north side. There are a few neighborhoods in the city that favor Ohio State and Illinois as well.

Northwestern basically only has a predominant rooting interest in the immediate Evanston area. Illinois' rooting interest takes over in droves just outside the suburbs, as you might expect.

All told, 9.6 percent of fans in Cook County root for Notre Dame, followed by Illinois at 8.1 percent and Michigan at 7.7 percent, according to the New York Times. 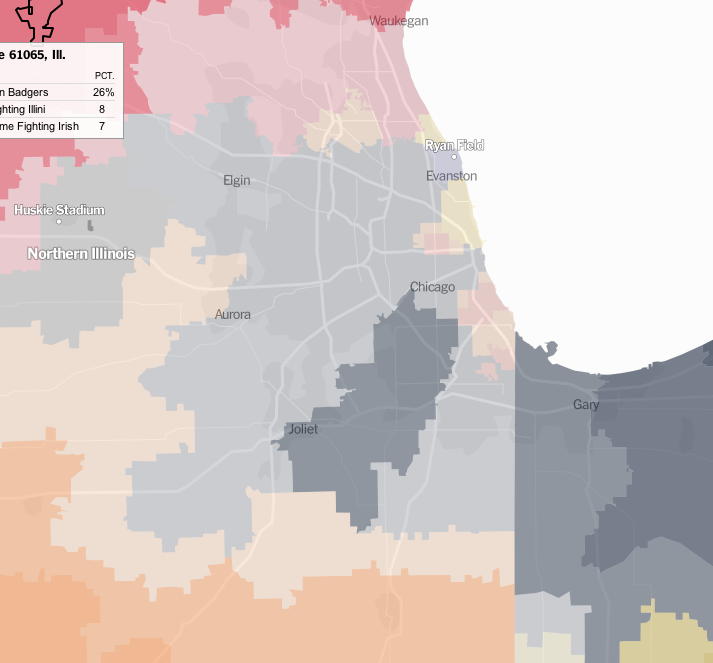