CHICAGO (CBS) --  Two children had a close call when they were nearly swept away by some monster waves on the Michigan City pier. But those kids never should have made it onto the pier at all.

Water safety expert Dave Benjamin with the Great Lakes Surf Rescue Project said the aerial footage shows how dangerous a walk along the pier can be for anyone when the waves are high, but it's especially dangerous for children. 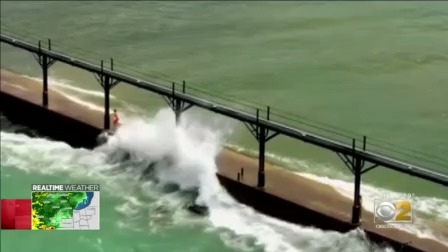 The lake was calm Wednesday at Michigan City Beach, and the sunbathers said they were taking precautions.

"We make sure they have their floaties on when they go out a little ways farther than just the shoreline," said Jennifer Sprunger.

But even on a day like Wednesday a nearby sign warns, "Caution when walking on the pier ... Conditions can change rapidly!!!"

Aerial cameraman Brandon Clair captured a dramatic example of that on Sunday: two children were on the edge of the Michigan City lighthouse. Then they headed back to shore gingerly. With the waves crashing on the pier around them and on top of them, they ran from post to post, hanging on and eventually making it to the beach.

"If they weren't hanging on they could have gotten washed off the Pier and into the harbor channel there," Benjamin said.

The kids weren't the only ones taking risks at the pier, according to Benjamin.

The head of the Michigan City Park District, Ed Shinn, said the powerful waves had knocked a temporary barricade into the lake. He said the park district is asking the Army Corp of Engineers, which owns the pier, for permission to build a permanent barrier to keep people from making such a dangerous walk when the waves are perilous.

Benjamin says towns up and down the lakefront should consider similar measures.

Sixty miles north of Michigan City on Sunday, Benjamin said a man had to be rescued after falling off a pier in South Haven, Michigan.

"The cities should do as much as they can and hopefully save a life versus risking a life of a patron," he said.

Benjamin also said on Sunday alone, several rescues were made up and down the lake in Michigan.

And in South Haven where the man fell off the pier, divers are looking for another man.

In the last decade 871 people have drowned in the Great Lakes.

CBS 2 was unable to find the children seen in the video.