CHICAGO (CBS) -- The three people charged in the gruesome slaying of Marlen Ochoa, a pregnant teenager who had been missing for three weeks, were ordered held without bail on Friday.

Clarisa Figueroa, 46, and her daughter, Desiree, 24, have been charged with one count each of first-degree murder and aggravated battery to a child. The elder Figueroa boyfriend, 40-year-old Piotr Bobak, has been charged with concealment of a homicide.

A judge denied bail for all three on Friday. At their bond hearing, it was revealed Desiree is four months pregnant.

The Murder of Marlen Ochoa

Police and prosecutors have said Ochoa met Clarisa through a Facebook group called "Help A Mother Out," and Clarisa offered to give Ochoa new clothes for her baby.

Prosecutors said Clarisa had been pretending for months before the murder that she was pregnant, even though she had previously had her Fallopian tubes tied. She even went so far as to post photos of an ultrasound, a crib, and a baby room on Facebook.

Assistant Cook County State's Attorney James Murphy said Ochoa first met the Figueroas at their home on April 1, when Clarisa allegedly told her daughter they needed to kill Ochoa and take her baby. Desiree said no, and told her boyfriend, who called police, but Clarisa said it was just an April Fool's joke.

When Ochoa visited the Figueroas' home again on April 23, she sat on the couch, and Desiree allegedly distracted her with a photo album of her late brother, who died last year. Clarisa then allegedly wrapped a coaxial cable around Ochoa's neck from behind, and began strangling her.

Prosecutors said Ochoa tried to stop Clarisa, and managed to get her fingers between the cable and her neck, prompting Clarisa to tell her daughter "you're not doing your f*****g job."

Desiree then allegedly peeled Ochoa's fingers away from the cable one by one. Clarisa then got on top of Ochoa and strangled her for 4 to 5 minutes.

Once Ochoa was dead, Clarisa sliced open her abdomen and removed her baby. Prosecutors said she placed the baby and placenta in a bucket, with the umbilical cord still sticking out; and then wrapped Ochoa in a blanket, shoved her in a plastic bag, and lugged it to a garbage can hidden on the side of their garage.

Prosecutors said Clarisa then called 911, claiming she had just given birth, and the baby wasn't breathing.

A neighbor allegedly saw her run outside, holding a newborn and wearing a blood-smeared shirt, but she had no blood on her shorts.

The neighbor said the woman told her, "I just had the baby, and it's not breathing."

An ambulance took the baby to Christ Medical Center, where Clarisa was examined, but prosecutors said she showed no signs of having delivered a baby. An OB technician who treated Clarisa cleaned off blood from her arms, hands, and face. Meantime, the baby was taken to the NICU, where he remains in grave condition, with no brain activity.

Photos posted on social media show Bobek with the baby in the hospital. It is unclear when those photos were taken. 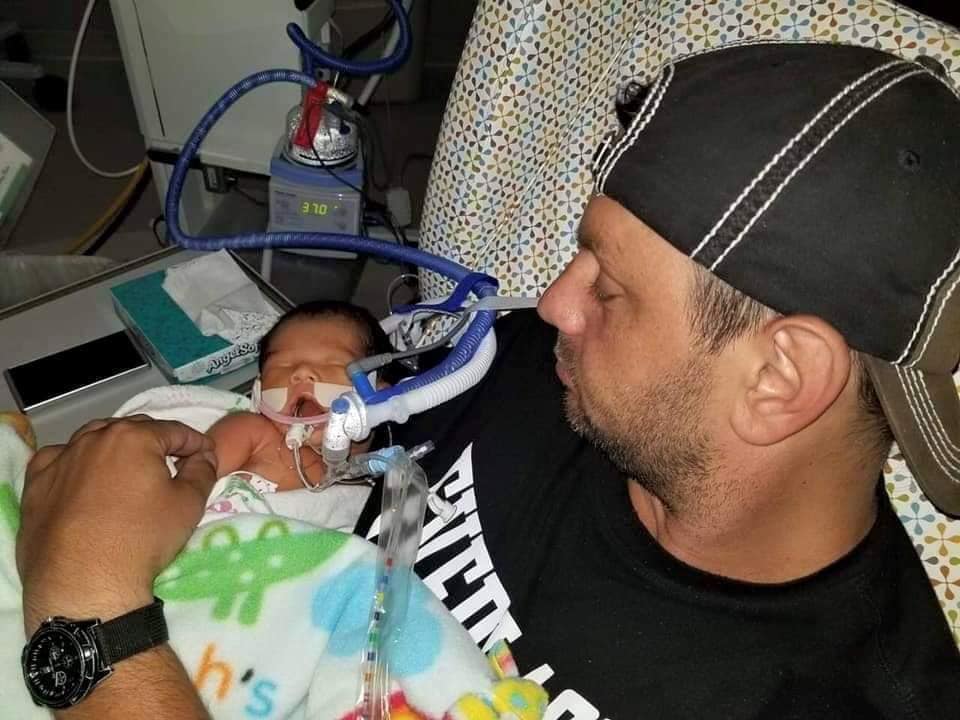 The couple even made a GoFundMe for the baby.

DNA tests this week confirmed this week the baby is Ochoa's. Ochoa's family has named the baby Yovanny Jadiel Lopez.

The day after Ochoa was killed, Bobak allegedly helped Clarisa clean up Ochoa's blood at the home, in an effort to hide the murder

On Tuesday, police executed a search warrant at the Figueroas' home, and saw Bobak cleaning a rug with bleach and a hose.

Detectives also discovered Ochoa's body in a garbage can hidden next to the garage, the cable used to strangle her still wrapped around her neck. The crime lab also found burned clothes and blood on the carpet, in the hallway, and in the bathroom.

The Figueroas, Bobak, and Desiree's boyfriend were brought in for questioning, and prosecutors said Desiree gave a full videotaped confession.

Police said their big break in the case came May 7 from one of Ochoa's friends, who led them to the Facebook page where she'd been in contact with Clarisa Figueroa about the baby clothes.

"Once they got that break on May 7, then things started going quickly," Johnson said. "There was nothing to point us in that direction in the beginning."

One of Ochoa's friends told detectives about the Facebook group she was in, prompting them to look into the group.

Police said it appears this is the first time the offenders did something like this, but they are going through social media to see if there were attempts to lure others.

The Illinois Department of Children and Family Services said they received a hotline call regarding an abuse and neglect allegation involving the baby on May 9. The baby was immediately placed in protective custody, until the baby was identified as Ochoa's on Monday.

DCFS had no prior contact with Ochoa's family, or with Clarisa Figueroa. The agency is conducting a parallel investigation with Chicago police.

It was unclear who reported the allegations to DCFS. The agency said it does not release information on who calls their hotline.

The Cook County Sheriff's Department confirmed Friday that Desiree Figueroa and Bobak had outstanding warrants around the time Ochoa was killed.

Bobak was on parole after he was convicted of aggravated battery to a peace officer. In February, an arrest warrant was issued after he was accused of stealing someone's methadone. His listed address was the home where Ochoa's body was found.

Desiree Figueroa also had a warrant out for violating the supervision requirements in her own theft case. That warrant was issued April 29.

The Cook County Sheriff's Department says they cannot comment on why Figueroa was not arrested earlier because it's not their investigation.Chicago police have also not responded.

The other big question in this is why it doesn't appear investigators were immediately alerted to the strange circumstances surrounding baby Yavani Yadiel Lopez.

Christ Medical Center says they can't comment. They do not release information about pediatric patients.