CHICAGO (CBS) -- For nearly 20 years, Marilyn Hartman baffled everyone. In a post-9/11 world, she flew the world over, she never had a ticket. She became America's Serial Stowaway. The one thing she's never done, is talk about it – in depth. How? Why? Will she do it again?

Never talked about it until now, that is, and exclusively with WBBM-TV Investigator Brad Edwards.

Hartman reflected on the moniker she's best known for: The Serial Stowaway. WBBM over the years has covered Hartman's travels extensively.

"So, Bradford, I don't care at all if someone calls me crazy, I mean the story is crazy," she told Edwards.

Hartman: "Hello is this Brad Edwards?"

Edwards: "Yeah. Hi Marilyn. How are you?"

Hartman: "I really appreciate you reaching out to me that was a very nice letter and everything, and I like your reporting as well … I've given this a lot of thought and I'm willing to do this."

Edwards: "Can I record this call?"

Hartman: "You definitely can record it, that's fine," Hartman said.

And they were off. Like Marilyn Hartman herself: America's Serial Stowaway.

Edwards and Hartman were pen pals since late 2019 -- her last attempt to flee for free. Audio recordings, obtained by the WBBM Investigators, reveal a Transportation Security Administration agent spotted her once again at O'Hare on October 10, 2019, and called police.

"There's been a Marilyn sighting over here," said one TSA agent. The dispatcher then asked the agent, "Can you keep an eye on her for me?"

From the Cook County jail, she wrote she wanted: "... To apologize ... My mea culpa to law enforcement, including the TSA ... it was not my intention to make their jobs more difficult." She told Edwards she thought she had taken at least 30 flights over the years.

The WBBM Investigators -- through a series of sources, public records requests, Ms. Hartman's recollections, and more -- compiled a forensic accounting of her free rides. 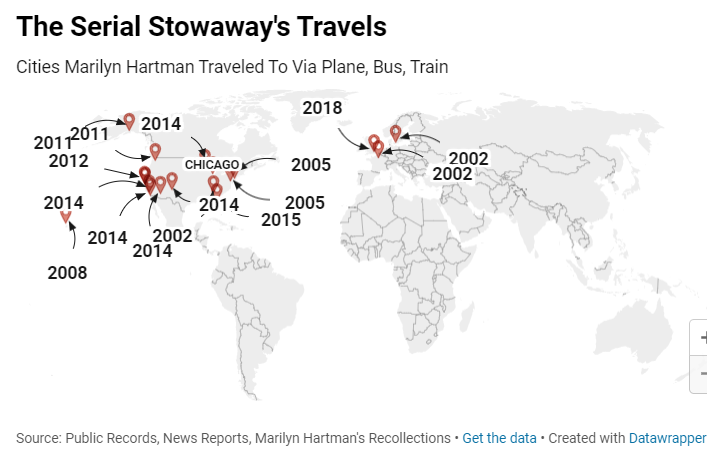 Hartman recalls, "The first time I was able to to get through I flew to Copenhagen. The second time I flew into Paris." It wasn't until some 12 years later that she popped on the radar of law enforcement.

August 14, 2014: Ms. Hartman, sans ticket, flew from San Jose to Los Angeles. A judge then warned her, don't do it again. Seven months later, in April 2015 in Jacksonville, she appeared in court where her fate was sealed: "Ms. Hartman has been determined by forensic psychologists to be incompetent to proceed."

"I know they keep emphasizing the mental illness … law enforcement … would like to have that in place. but umm … (laughs) no, I'm pretty good," she said.

Good at getting away with it.

Per law enforcement documents, as early as January 2015, Hartman was on the "trespass list." In April 2015, documents show she was known as a "serial stowaway." In May 2015, she was "... considered a high security risk." And, in July that year: a "habitual stowaway."

So, how did she get away with taking so many flights for so long, without a ticket or a boarding pass?

"The thing I've got to tell you. I have never been able to board a plane by myself. I was always let through," Hartman revealed. "I mean I was able to go through the security line without a boarding pass."

The year prior to her latest arrest, her last success happened in January 2018. Reports obtained by the WBBM Investigators say Hartman, "evaded the security process" "and document / ticket check" and took a $3428 flight to London on a British Airways plane. She had become omnipresent at TSA checkpoints, with her picture at security checkpoints.

She described to WBBM how she did it.

"I got by them, this is the thing that is so crazy, by following someone they would be carrying like a blue bag," she said. "And the next thing I know, I get into the TSA line and TSA lets me through, and they think I'm with the guy with the blue bag."

"For her to be able to repeat that over and over, that is just mind boggling," says aviation security expert Jeff Price. "The genius of her mode of operation is in its simplicity," he said and warned, "... It's the unsophisticated types of plans are often the most successful."

Price, once assistant head of security at Denver International Airport, and a professor at the Metropolitan State University of Denver, has written "Practical Aviation Security: Predicting and Preventing Future Threats" considered the leading textbook on aviation security.

"Have we taken Marilyn Hartman did serious enough?" Edwards asked.

"I don't think we have," answered Price.

Is the TSA using Hartman's tactics as a training tool? We asked and were told to put in a public records request for the information. We did and are still waiting for a response. "They literally should have a curriculum designed around how she's able to get through security and that should be taught to every Transportation Security Officer out there," said Price.

Marilyn Hartman looks like a grandmother. It makes you wonder would the same type of courtesy be extended to a young man with olive skin or a mother with a hijab? Or do we need to think differently, we asked Price.

"We definitely need to think differently," he said and added, "We can't constantly be preparing for the last attack. The next attack will not look like that."

"And the next attacker?" Edwards asked.

"And the next attacker. Exactly," Price said.

Back to Marilyn Hartman and why she took all those flights. "When I took the plane ride, I wasn't happy. I wasn't 'Oh, I'm going here or there'— I was actually in a depressed state of mind," she told WBBM.

Diagnosed bipolar, it wasn't a manic episode that set off the flight trigger, it was the opposite. An example, in 2015. Back-to-back days – July 3 and July 4. One Midway, one O'Hare. Similar clothes, same carry-on. So depressed she'd admit, her desperation got her caught, both times.

In one phone conversation from jail, Edwards asked Hartman if she felt a fight or flight response and literally took a flight. She answered: "That is literally what happened."

She spoke later about her mental health. "I'm bipolar. And this is something I've rejected for years."

She wrote in several letters to Edwards about her life growing up, as a young child. Hartman wrote that she was born in 1951 at Jackson Park Hospital and told Edwards later about her family life. "There was so much violence and mental illness in the household," she said.

Her life alone, ill, not much of note, until she took off.

In October 2019, when TSA last stopped her at O'Hare trying to take flight again, she was already on probation for the 2018 flight to London. "I have real tough judge on this case," she said. "Judge Chiampas is pissed at me for the situation in which I found myself."

She's already been in custody for 500-plus days on these latest on charges of burglary, criminal trespassing, and probation violation.

Details of a plea agreement announced in early March would drop the burglary charge and give Hartman 18 months' probation, with mental health counseling. A deal the Judge didn't seem interested in accepting. Judge Chiampas said at that hearing, "I will not be giving her a third probation."

In those several phone calls and letters with Edwards, Ms. Hartman had a warmth about her, was contemplative. She wrote of the inequities, Jim Crow-like in jail. She's currently out of jail on electronic monitoring and on a steady diet of counseling and daily meds.

Edwards asked, "Would you consider yourself fascinating?"

"Yes I would under the circumstances … and I downplay it, Brad, I don't. Yeah," she said.

Hartman never did an in-depth interview "… Until I was confident that I wouldn't take an illegal flight again," she said. And, added one final thought, "I want the opportunity to apologize to the people I've hurt."

Hartman's plea deal will likely be finalized in early April when all parties are back in court. The WBBM Investigators could not find anyone, from TSA to gate agents, who had ever been disciplined for any Hartman gaffe.

We reached out to several major airlines. Southwest told us they had nothing to say on the record on the matter. Delta and United did not respond.

American Airlines did send a statement saying they had a rigorous process in place to ensure safety.

"We are aware of the incidents involving Marilyn Hartman at O'Hare Airport. American's Corporate Security and Safety teams have rigorous processes in place to ensure the safety of our operation and we continue to work with our partners in law enforcement and at the TSA to maintain a safe and secure airport environment." --American Airlines Spokesperson