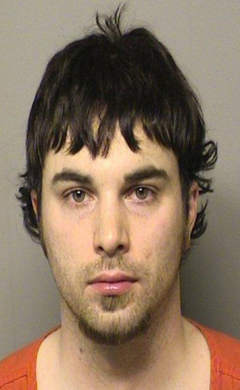 SOUTH HAVEN, Ind. (STMW) -- When his wife announced she was leaving him, police say, Philip Hritz took off with their 1-year-old son, and threatened to hurt the baby and himself.

Hritz, 28, of South Haven, Ind., was arrested during a traffic stop about 3:30 p.m. Thursday at Airport Road and U.S. 6 in Portage. Porter County, Valparaiso and Portage police were involved in the search.

The 31-year-old woman told police Hritz has been verbally and physically abusive for a long time. At about 1:30 p.m. Thursday, according to police, Hritz allegedly refused to let her leave the house, with a family member, to pick out flowers for her grandmother's funeral.

Instead, he ordered her to make him lunch and threatened to beat her if she didn't. That's when she told him she was leaving him and walked out of the room, according to the police report.

Hritz is accused of following her down the hall, hitting her from behind and knocking her unconscious. She woke as he was physically attempting to throw her out the front door.

She called police from a neighbor's house and then, as she ran for home to get her baby, Hritz left the area in his white Oldsmobile Alero, waving at her as he passed, she told police.

Officers allowed the woman to pack a bag and had her moved to a safe location while they looked for Hritz. About 2:35 p.m., he contacted the victim, saying he was at the courthouse.

According to police, he threatened to hurt their child and himself if she wouldn't talk with him. The woman followed him to Portage and called police to tell them where he was. She was reunited with her child at the scene of the traffic stop.

Hritz was charged with criminal confinement, domestic battery in the presence of a child, and intimidation, all felonies.

He has a previous arrest from May 2012 on a domestic battery charge. He also was arrested in July 2008 on charges of criminal trespass and conversion, then again in November 2008 after he failed to appear at a hearing.

(Source: Sun-Times Media Wire © Chicago Sun-Times 2014. All Rights Reserved. This material may not be published, broadcast, rewritten, or redistributed.)