Late Sunday afternoon at Lollapalooza a golf cart was making its way across the grass in the artists’ area backstage. There was a man in the driver’s seat and a woman behind him, and also another passenger: a tray of golden-brown lobster corndogs. The cart’s destination? The bungalow of Texas rock band At the Drive-In, who had just finished their set on the nearby Red Bull SoundStage.

A crustacean-dog-on-a-stick hardly seems like standard music festival cuisine. But when it comes to food, Lollapalooza is not your standard music festival. For the past three years, its culinary vision has been in the hands of chef Graham Elliot, who runs three successful area eateries (Graham Elliot, Grahamwich and the recently opened G.E.B.) and appears as a judge alongside Gordon Ramsay and restaurateur Joe Bastianich on the Fox TV cooking competition show MasterChef. Since 2010 he has served as Culinary Director for Lollapalooza, curating and overseeing the massive food court known as Chow Town and also, on occasion, cooking for some of the bands who perform at the festival.

Which brings us back to At the Drive-In. When Elliot and his team, which is headed by Merlin Verrier, a Michelin-starred chef and the Operations Director for Graham Elliot, arrive with the meal—lobster corndogs, salads and an array of other selections—the appreciative musicians ask Elliot to pose with them for a photo. The chef has long been a fan of the band’s, and as it turns out, they are now fans of his as well. Elliot sees this mutual admiration as stemming from a shared creative spirit.

“I have the utmost respect for musicians,” says the chef, who plays guitar himself. “I respect them for being craftsmen, and also for having a voice and vision that they want to get across to people. It’s very similar to cooking. So the meals we put together here are our way of saying to the artists, ‘We love what you guys do, and we think you’re amazing. And this is what we know how to do. We’re going to cook for you.’ ” 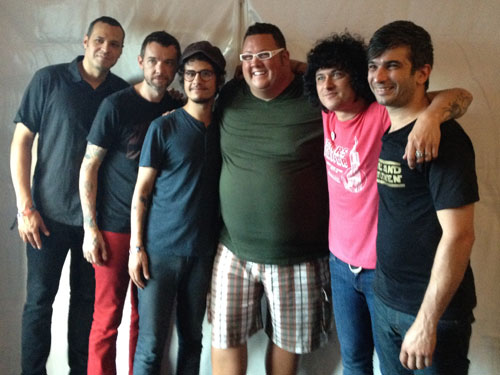 At this year’s Lollapalooza Elliot and his team also cooked for the Black Keys. But unlike the impromptu meal he golf-carted to At the Drive-In (which had come to be following a series of public tweets between chef and band), the Black Keys’ dinner was planned in advance and featured an extensive menu: Whole-roasted redfish stuffed with fennel, lemon and verbena; grilled flank steak; Caprese salad with heirloom tomatoes; Mexican-style corn on the cob; grilled organic market vegetables; and blueberry cobbler. “And that was for just two guys!” Elliot says with a laugh. Sunday night they served a similarly extravagant meal to Jack White and his band.

But Elliot spends most of his weekend at Lollapalooza bringing food to concertgoers. With Chow Town, he has gone a long way toward transforming the world of live-music eats from a place ruled by rubbery hot dogs and soggy soft pretzels to one that offers a truly unique culinary experience. There are pizzas and hamburgers to be had at Chow Town, but also Asian-style pork-belly sliders, black-truffle-infused macaroni and cheese and Creole/Cajun chicken “wangs.” In addition, there is a farmer’s market and a craft beer tent. Elliot’s own Grahamwich booth serves truffle-and-parmesan popcorn and the aforementioned lobster corndogs.

Each year Elliot and his team handpick the participating vendors, all of whom are based in the Chicago area. “It’s a way to showcase the great cooking that’s going on in this city,” he says. “There are multiple stages for music at Lollapalooza, and we look at Chow Town as kind of our ‘culinary stage.’ We reach out and personally invite different restaurants, and now we also have restaurants that contact us because they want to be involved. The ones we think will be a good fit we ask to come and cook with us.”

The cooking is not always easy. “It’s actually pretty tough,” says Verrier. “You get pulled out of your brick-and-mortar restaurant, where you have your big kitchen and all your equipment, and you’re transported to the middle of Grant Park, where you’re running off of propane tanks and generators in a 20 x 20 tent. Then you have to go and execute good food for 100,000 people. Not everyone is able to do that. But some vendors hit it out of the park. Last year Wow Bao went through something like 30,000 pieces of bao over the course of the festival. And they’re doing great again this year.”

Though Chow Town debuted at Lollapalooza in 2010, the seed for the idea was sown one year earlier, when festival founder Perry Farrell invited Elliot and his team to take part in the weekend. “Perry and his business partner Charlie Jones wanted to have a chef presence at the festival, so they asked us to come set up a booth,” Elliot says. “That first year we served four different items and probably three of them didn’t sell. We were too artsy. We did things like buffalo chicken with beer froth and blue cheese. And we realized that out of 100,000 people, maybe 1,000 of them actually like blue cheese.”

But Farrell saw a future. “He wanted Lollapalooza to be the first festival to really showcase food,” Elliot continues. “So we were invited back for the next year, and that’s when we decided to go out and find all these different restaurants and start Chow Town.” 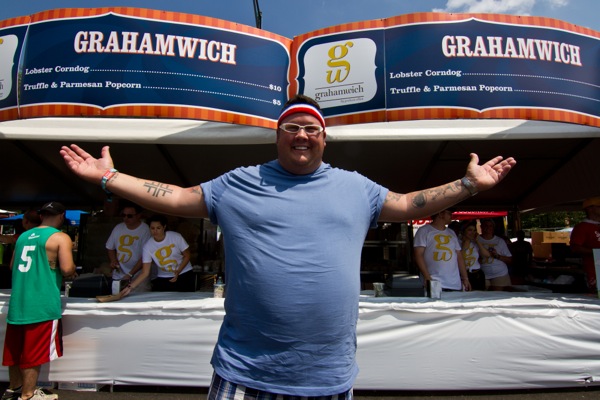 Chow Town’s culinary mission can in a sense be viewed through the lens of Elliot’s blue cheese misstep. The goal is to offer unique and exciting food while not losing sight of the audience expects. “The best dishes take foods that are typical to this type of environment and put a twist on them,” Verrier says, pointing to their lobster corndog as an example. “Every county fair in every U.S. town serves your basic corndog. It’s something that people understand, and it’s something that works. So we started from there and then said, ‘How can we elevate this into something new?’ And now it’s become a signature item both for us and for Chow Town as a whole.”

In addition to the batch of lobster corndogs that he and his team delivered to At the Drive-In, Elliot says that the Grahamwich booth will serve anywhere from 15,000 to 20,000 of them over the course of the weekend. It’s a lot of corndogs sold in just three days, but the chef insists that financials are hardly the main reason vendors flock to Chow Town. “Keep in mind we have to close down Grahamwich the whole time we’re here. And we have to move the staff over to the festival, in addition to a lot of other things that have to happen. We forfeit that weekend profit at the restaurant in order to be here. So the money is not why people do it. It’s really for the experience and to be a part of something.”

In the years since the first Chow Town, food and drink have become a big deal—not to mention a big draw—at music festivals across the country. Bonnaroo in Nashville, Outside Lands in Seattle and Coachella in California, among others, have increased the amount and variety of their food offerings, and this past May in Brooklyn, the inaugural Great GoogaMooga flipped the script entirely, making food the main attraction and putting the music in a supporting role. “Other festivals have done the food thing maybe last year and this year,” Verrier says. “We’ve been doing it for four. This isn’t an egotistical thing but I believe we started this trend.”

Going forward, Elliot hopes to continue to forge new festival-food paths. “In addition to the booths it might be cool to have a public cooking area where in one spot you’re doing say, a Moroccan theme with a spit-roasted lamb, and then over in another area you’re having a barbeque with a huge smoker,” he says.

He’d even consider taking the operation international. “It would be incredible to do a Chow Town for Lollapalooza Brazil or Lollapalooza Tel Aviv, where we could partner up with restaurants in these countries and do something really amazing,” Elliot says. “Perry is always expanding Lollapalooza, and I think that we can continue to expand right along with it.”