"I will code what I really want to say to Donald Trump It begins with F and ends with you."

The mayor responded to a series of tweeted comments by the president and was upset by his continued rhetoric over the Floyd's death at the hands of Minneapolis police officer Derek Chauvin.

"Donald Trump's comment last night was profoundly dangerous. We must stand in firm solidarity and say this is totally unacceptable no matter who is the speaker," Lightfoot said. "We see the game he is playing. It is so transparent and he is not very good at it. He wants to show failures on the part of Democratic local leaders to throw red meat to his base. His goal is to polarize and inflame racist urges. We can absolutely not let him prevail." 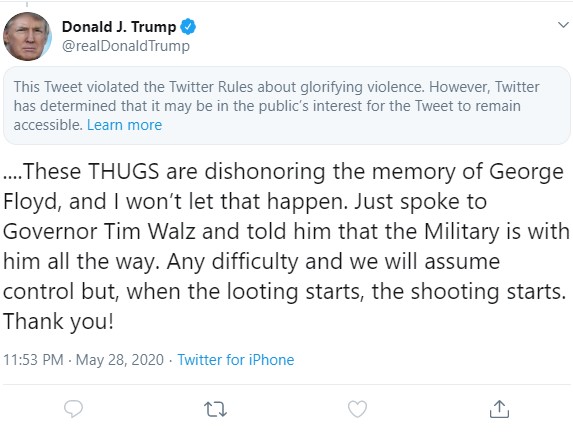 "I watched in horror as President Trump tweeted a threat to shoot people. In the streets," Lightfoot said.

"Watching that poor man begged for his life and for the ability to breathe and watching the life leave him there on the streets, I felt angry, I felt sick and and a range of other emotions all at once. Being black in america should not be a death sentence. We should not fear for the lives of our loved ones."

Fired Minneapolis police officer Derek Chauvin has been arrested four days after George Floyd's fatal arrest that sparked protests, rioting and outcry across the city and nation, and Hennepin County Attorney Mike Freeman announced he has been charged with third-degree murder and manslaughter.

Gov. JB Pritzker also expressed his own outrage at Trump's tweets regarding the protests in the Twin Cities.

"His tweets, his reaction, his failure to address the racism that exists in America is stoking the flames in sometimes subtle and sometimes not so subtle ways, is completely unacceptable. It's reprehensible," Pritzker said.

"I cannot imagine the rage and the fear that must be felt by a black American watching what happened to George Floyd. The threat that comes to every black American, under color of law, that they see in a video like that; we're lucky that that video was ever taken, because that is happening around America probably every day," he added.

"We feel it here in our city. People in our city feel the pain and trauma evoked by the killing of George Floyd. That is, of course, understandable. Moments like this unearth generations of pain that are barely below the surface on the day today," the mayor said.

Lightfoot said while she was very upset with images regarding protests for the death of George Floyd by the hands of Minneapolis police, she cautioned Chicagoans to take a measured approach to protests in the city.

"Some are planning protests here. As the superintendent said yesterday, under his leadership the deferment has been hard at work developing authentic relationships to restore trust with communities," Lightfoot said.

"We have not forgotten the days following the release of the video showing the murder of Laquan McDonald and following the deaths of too many names both before that time and after that we can now recite as a painful mantra."

She said marching peacefully is acceptable but it has to be carried out through the rules set by COVID-19.

"Keep folks safe and give space to those who want to peacefully exercise their First Amendment rights and demonstrate their righteous anger. Wear  face covering, bring hand sanitizers. (Provide) a short distance between one another even as you're marching," she said. "If you feel sick please stay home."  measured approach to protests in the city."