CHICAGO (CBS) -- Visibly angry and citing the hundreds of people seen congregating outdoors in defiance of the stay at home order, Chicago Mayor Lori Lightfoot said the city's lakefront, the 606 and other public spaces will be closed.

And if people go against that rule, they'll be fined and even arrested.

The mandate from Illinois Governor JB Pritzker came earlier this month that issued people with non-essential business to stay home and if out in public to stay at least six feet apart.

"We could be expecting upwards of 40,000 hospitalizations in the coming weeks. Not 40,000 cases but 40,000 people who will require acute care in a hospital setting. That number will break our healthcare system," Lightfoot said.

She said she was upset at what she saw Wednesday, after laying out the consequences (which include fines and arrests) of violating the order to be outside only for a respite, not spending extended periods outdoors.

"Your conduct is posing a direct threat to our public health. Without question, your continued failure to abide by these life saving orders will erase any progress we have made over the past week in slowing the spread of this disease and lead to more deaths," Lightfoot said.

So, effective immediately, the lakefront is closed in both directions along with the 606 and the River Walk.

Along with the lakefront, trails, bike paths, green spaces, facilities and parks adjacent to the lakefront will also be closed.

After her news conference, Mayor Lightfoot reiterated the point with an emergency alert sent out to wireless customers, and an Emergency Alert System civil emergency message on television. 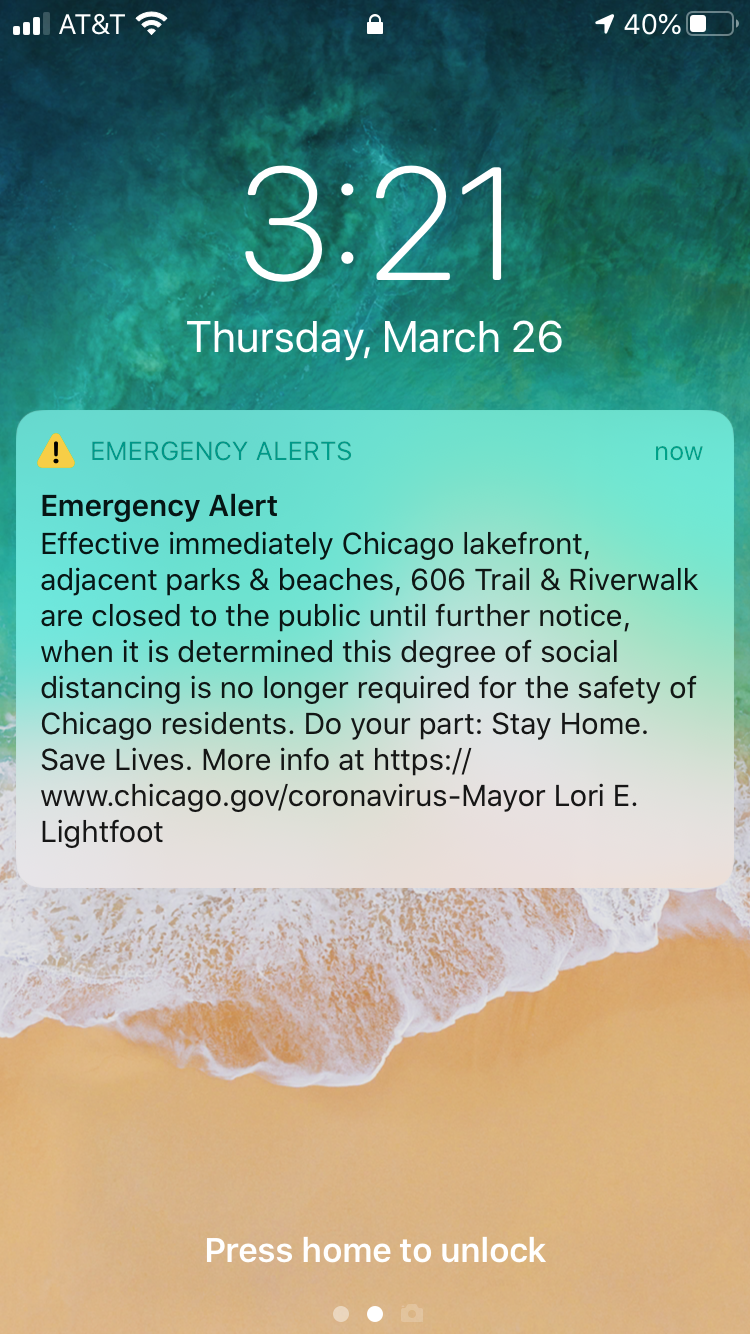 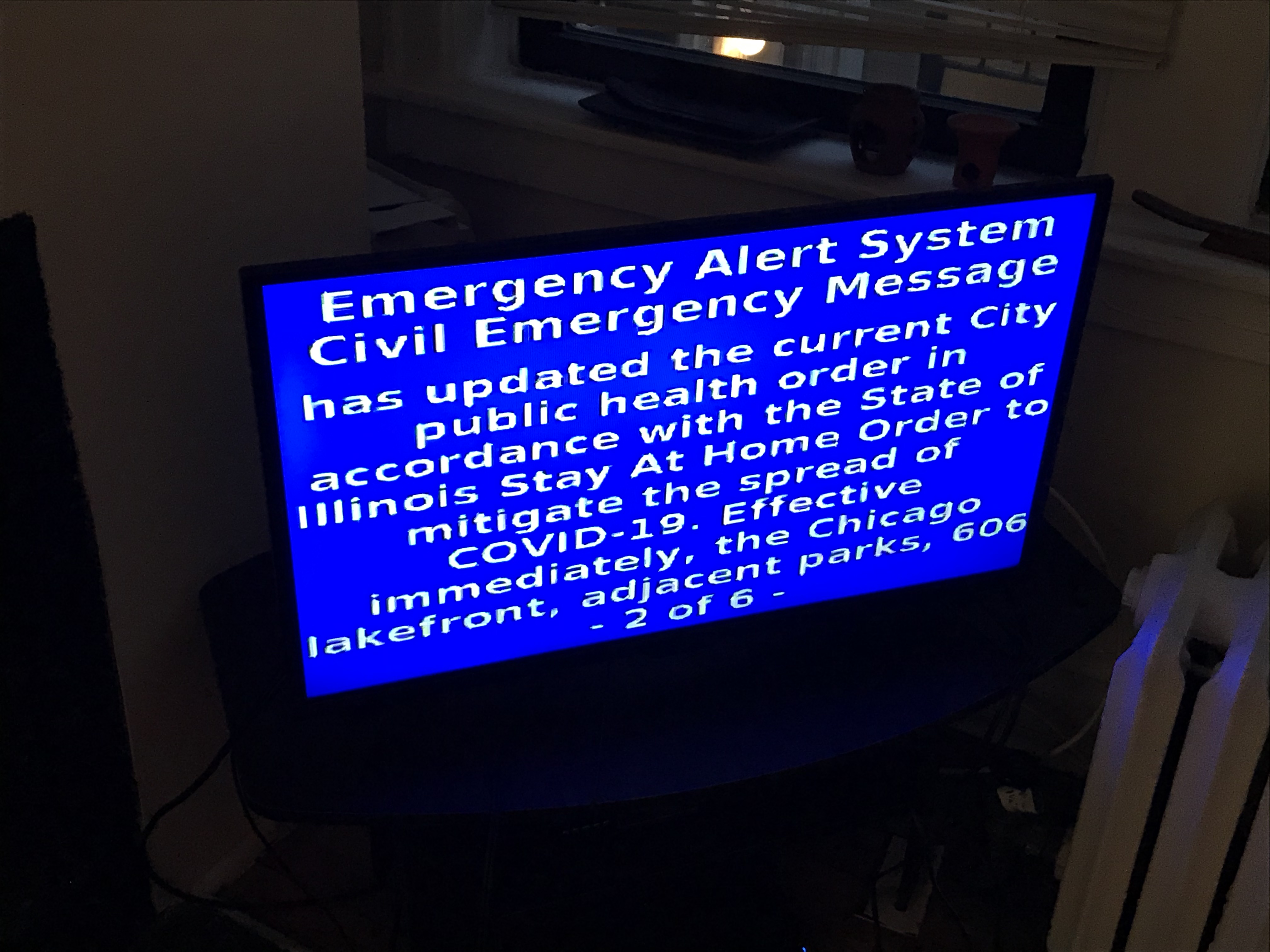 Lightfoot added that if people want to find alternative outdoor spaces they can click on the city's department of transportation site for more information.

"Over the past few days we have seen crowds of 100 or more congregating together particularly along our lakefront and along the 606 and other locations. This is a blatant violation of Pritzker's stay at home order," Lighfoot noted.

She added that the city is putting out an aggressive media campaign to further spread the word and reiterate the mandate. Called "Stay Home Save Lives" it will be rolled out in the coming days.

"Above all, we want the residents of Chicago to be safe," said Chicago Park District General Superintendent and CEO Michael Kelly. "This closure is necessary to enforce social distancing and mitigate crowding that is typical along Chicago's lakefront but threatens the health of our city during this very delicate time."

Even with the lakefront and park closures, places inland are also banning people from congregating.

"It restricts any and  all contact sports including basketball, soccer and football. I have seen and we have received reports of people engaging in full contact sports as if this virus isn't serious," Lightfoot said. "A pandemic means it's here in our midst every day and we've all got to do our part."

Along with Chicago city officials, suburban mayors stood with Lightfoot to explain how the coronavirus is affecting their municipalities, including Joseph Tamburino, Mayor of the Village of Hillside.

"When it comes to COVID-19, any order by any city or town is only as strong as the people around it," Tamburino said.

Chicago's interim police superintendent Charlie Beck said the CPD issued 56 warnings on Wednesday and there was at least one arrest for the failure to obey the health order.

"This is serious business. This is not a game. This is not a time to think about your own physical strength and conditioning over the public's health," Beck said. "Just like our 13,600 men and women of the police department who are going making contact with the public every day and risking their health for you, you have to make sacrifices to keep your neighbors healthy, our elders healthy, our children health and yourself healthy."

Joining Lightfoot and Beck was the head of the Chicago Department of Public Health Doctor Allison Arwady who continued to stress the importance of the governor's order.

"As we have learned from watching how other countries have responded to this outbreak, the best way for us to contain this virus is to practice proper social distancing," said Dr. Arwady. "This doesn't mean you can't go outside for fresh air, walk your dog or go for a run. It just means you have to do it the right way, by keeping your distance from others and not congregating in groups."