CHICAGO (CBS) -- A day after the City Council averted a potential showdown vote on a controversial new ward map drawn up by the Black Caucus and the Rules Committee, members of the Latino Caucus moved to send the remapping process to a voter referendum next year.

Members of the Latino Caucus, and three other allies who aren't part of the caucus, filed a petition with the City Clerk's office on Thursday, seeking to put their proposed ward map on the ballot during the 2022 primary elections.

However, the Latino Caucus said they intend to continue negotiating with other members of the City Council in an effort to come up with a compromise that at least 41 aldermen would approve, avoiding the need for a voter referendum on a new ward map for the city.

The city is required to redraw the boundaries for all 50 wards every 10 years, based on new U.S. Census data.

"What we submitted was a reflection of the city of Chicago: 16 African-American wards, 15 Latino wards, 15 Caucasian wards, 3 minority majority wards, and for the first time ever an Asian majority ward," said Ald. Gilbert Villegas (36th), who chairs the Latino Caucus.

If 41 aldermen vote to approve a new ward map for the city before next year's primary elections, the voter referendum triggered by the Latino Caucus would be canceled, so aldermen still have more than six months to negotiate a deal.

If a map is not approved by the council, or is approved with fewer than 41 votes, any 10 aldermen who voted against the council-approved map can file a petition to put a proposed map on the ballot during next year's primary election.

If the fight over a new ward map does end up in the hands of voters, it would be the first time in 30 years that voters would decide on a new map.

A spokeswoman for the Latino Caucus said their move on Thursday to trigger a voter referendum was meant only to ensure transparency during the remapping process, not as an act of aggression against other aldermen.

The move comes one day after City Council Rules Committee Chair Ald. Michelle Harris (8th) unveiled her committee's proposal for a new map of the city's 50 wards, and called off a potential showdown vote during a special meeting of the City Council.

Harris said the Rules Committee will host two hearings on the proposed map next week, before recessing for the holidays, and then hold further public hearings in January.

"To promote transparency, and to ensure that everyone has access to the redistricting process, I will chair Rules Committee meetings over the coming weeks and months to review the map, and discuss proposed changes," Harris said.

With no vote on a map on Wednesday, the City Council will miss a Dec. 1 deadline to pass a new map of all 50 wards based on 2020 Census data, opening the door to having two or more maps placed on the ballot next year for voters to decide.

The City Council's Latino Caucus has drawn up its own competing map, and has demanded any new ward map include at least 15 Hispanic-majority wards, based on the city's growing Latino population. Their map would include 15 majority-Latino wards (up from the current 13), 16 majority-Black wards (down from the current 18), and the city's first majority-Asian ward.

However, the Black Caucus has insisted on at least 17 majority-African-American wards, and has said there should be only 14 Hispanic-majority wards, as well as the city's first majority-Asian ward.

While the Latino Caucus released its proposed map in early November, it wasn't until Wednesday that the Rules Committee proposal had been made public.

In a letter to Harris, Latino Caucus vice chair Ald. Silvana Tabares (23rd) said the Rules Committee's proposed map "appears to punish alderpersons who are advocating for strong wards for the Latino community, Asian community, and the African-American community."

"We will file the Petition to protect our communities against improper retaliation for our engagement in a protected activity: advocacy for minority communities," Tabares wrote.

As CBS 2 Political Investigator Dana Kozlov reported Tuesday night, many Chicago communities are hoping a new ward map gives them more unity – rather than leaving their neighborhoods split between oddly-shaped wards each under the jurisdiction of a different alderman. 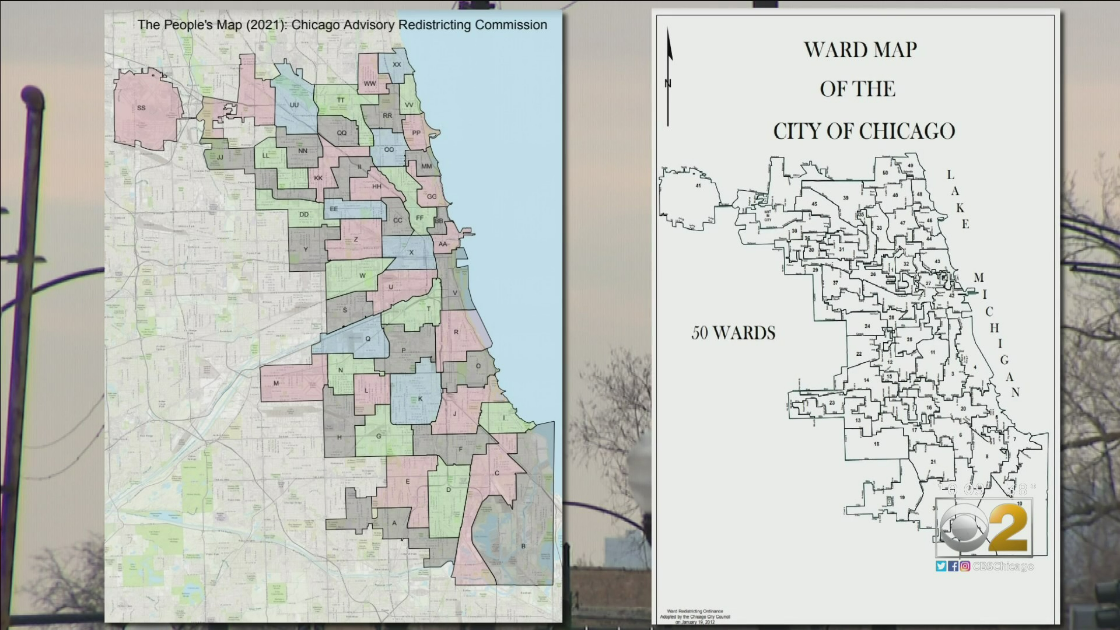