CHICAGO (CBS)--In the wake of the Jussie Smollett case being dropped, Cook County State's Attorney Kim Foxx has received a number of threats described by her office as "racially-charged." 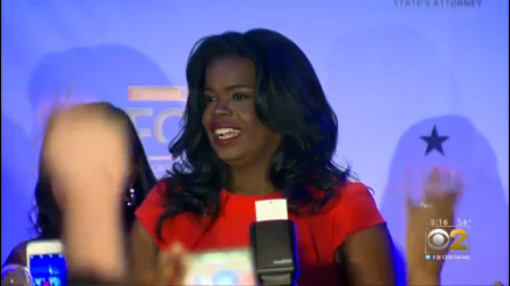 "We can confirm that the State's Attorney has received threats to her personal safety and security, a number of which have contained racially charged language," a statement from her office said.

Foxx has faced heavy criticism, both in Chicago and beyond, for her office's decision to drop the 16 felony charges against Jussie Smollett.

Hundreds of emails and text messages that surfaced last week via a public records request show Foxx texted her staff dismissing Smollett as a "washed up celeb who lied to cops" who was being charged too harshly.

Foxx, who had recused herself from the case, believed the charges against Smollett were over the top.

"Sooo......I'm recused, but when people accuse us of overcharging cases...16 counts on a class 4 becomes exhibit A," she wrote.

In the messages, she compares Smollett's case with that of singer R. Kelly.

"Pedophile with 4 victims 10 counts. Washed up celeb who lied to cops, 16. On a case eligible for deferred prosecution I think it's indicative of something we should be looking at generally. Just because we can charge something doesn't mean we should."

Smollett was charged and pleaded not guilty to 16 counts of disorderly conduct for allegedly lying to police about a hate crime, but Cook County prosecutors dropped the charges against Smollett after he agreed to forfeit his $10,000 bail and performed 16 hours of community service.

"After reviewing all of the facts and circumstances of the case, including Mr. Smollett's volunteer service in the community and agreement to forfeit his bond to the City of Chicago, we believe this outcome is a just disposition and appropriate resolution to this case," the Cook County State's Attorney's office stated in an email at the time.

Foxx said she recused herself from the case. First Assistant State's Attorney Joseph Magats, a 28-year veteran prosecutor, had been the lead prosecutor. Foxx's office later said it was not a formal recusal. Rather, Foxx separated herself from decision making out of an abundance of caution.

CBS 2 Legal Analyst Irv Miller said Foxx should have stayed away from the case altogether after recusing herself.

"She shouldn't be even thinking about the case. She should have left it to the first assistant, because that's what she wanted to do. That would have been the right way to do it. Obviously she was involved. Obviously, just by the number of these text messages, there was major concern going on after this thing went down," he said.

The deeply-rooted drama in the Cook County State's Attorney's office is further evidenced by a series of resignations from several high-profile staff members, including the First Assistant State's Attorney, the head of Special Prosecutions Bureau, Chief Policy Officer, a Senior Advisor, and a Deputy Policy Advisor.

All left within the last year.